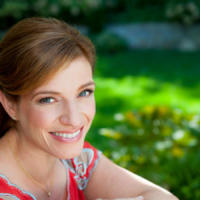 Born and raised in Mexico City, Pati Jinich is the host of the Imagen Award winning and Emmy, James Beard and IACP nominated PBS television series PATI’S MEXICAN TABLE now on its sixth season. She is also resident chef of the Mexican Cultural Institute in Washington D.C. and author of two cookbooks, “Pati’s Mexican Table: The Secrets of Real Mexican Home Cooking” and “Mexican Today: New and Rediscovered Recipes for the Contemporary Kitchen.” Pati is a regular guest on NBC’s The Today Show, CBS’s The Talk, ABC's The Chew, NPR’s All Things Considered and The Splendid Table, and Univision’s Despierta America. She has cooked at the White House for President Obama’s Cinco de Mayo and Easter celebrations. And, in April 2017, the Council of the Americas named Pati one of the Top 5 Border Ambassadors who have performed outstanding work bringing the United States and Mexico closer together in their Americas Quarterly magazine. She lives in Chevy Chase, Md., with her husband and three sons.