In Parashat Achrei Mot, the Torah’s fullest description of Yom Kippur appears (Leviticus 16:2-34). But Holy Days, holidays, and festivals develop and evolve as human life changes. The Yom Kippur we celebrate in the 21st century is considerably different from the ritual and ceremony described in Leviticus 16. For example, one word prominently used in this chapter is a term with which most contemporary Jews are completely unfamiliar, namely, the word “Azazel.”

Two goats were brought before the High Priest, who cast lots to decide which of the goats was to be designated “for God” and which “for Azazel.” Laying his hands upon the head of the goat designated “for Azazel,” the High Priest confessed the sins of the entire congregation. This goat was then led forth to a high, rugged cliff in the wilderness, from which it was cast down as atonement for the sins of Israel.

Some translate the word “Azazel” as “scapegoat.” But falsely charging a person, group, or thing as the cause of the evils that befall us is a relatively modern idea. It was not the way of atonement in biblical days any more than it should be in ours. We cannot attribute our shortcomings to anything or anyone else. The authors of Leviticus were neither so primitive nor so naive as to hold this goat responsible for the sins that it carried.

I am persuaded by Mordecai Kaplan that “the meaning of that ritual was that you had to get rid of evil before you tried to do good.” The primary source of evil is always to be found by looking within. The need to begin with ourselves, to look within to find the cause of evil in our own midst, has not changed.

The Need for Yom Kippur

We do not need Azazel in our day, but we do need Yom Kippur. We also need to understand that the efficacy and value of Yom Kippur are for those who observe it during the whole year. The practice of mending our ways by approaching God with contrition and resolve to improve should not be limited to a single special day of judgment. One of our rabbis said, “A person is judged every day, every hour, every moment.”

This is not to say that the observance of a special day of repentance has no value. The first chief rabbi of Tel Aviv referred to Yom Kippur as a “Temple in time,” an apt metaphor. As Rabbi Louis Jacobs explained, “God can be as little contained in a day as in a place. But just as human beings have found value in setting aside special places of worship for the God who is outside space and who embraces all of space, there is nothing incongruous with setting aside a portion of time for the concentrated worship of the God who is outside time and who embraces all time.”

We humans are influenced and inspired by periodic reminders of the truths we profess. The original Temple, like our own temples, was erected so that God would dwell in the hearts of our people. Like our ancestors, we are moved by the impressive rituals that take place within our temples, such as those performed on Yom Kippur. But God does not, as it were, come down to earth for only one day of the year.

If Yom Kippur is observed in the proper fashion — with no scapegoating but rather honest introspection and resolve to change — it will bring us nearer to God throughout the year. May our sacred spaces in our temples of time inspire us to come closer to God each and every day of our lives.

How can we create mini-Yom Kippurs–opportunities for abbreviated or accelerated processes of teshuvah (repentance)?

Who or what are the scapegoats of our time, the pass-the-buck mechanisms by which we slough off the consequences of our own misdoings? How can we confront and/or avoid them?

For a full exposition of the biblical Yom Kippur as well as the role of Azazel, see W. Gunther Plaut, The Torah: A Modern Commentary. UAHC Press, pp. 858-869. 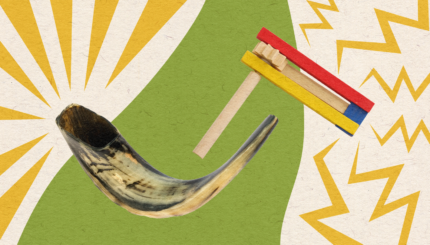 The Surprising Connection between Purim and Yom Kippur

Purim and Yom Kippur appear to be complete opposites but the ancient rabbis say they are really two sides of the same coin.