Women in Rashi’s Time: It Wasn’t the Dark Ages for Them

The Ten Commandments: A Gender Analysis

Reprinted with permission from JOFA, The Jewish Orthodox Feminist Alliance.

The mishnah in the Talmudic tractate of Kiddushin, page 29a, states “…and all positive, time-bound commandments (mitzvot aseh shehazeman gerama), men are obligated [in] and women are exempt [from].” The gemara acknowledges that there are exceptions to this rule when the Torah (either explicitly or through the interpretation of the Oral Law) states that women are obligated. However, the gemara accepts the halakhah of the mishna as biblical in origin, and–in the absence of a statement obligating women in specific positive time-bound commandments–women are considered exempt from the majority of such mitzvot.

A positive time-bound commandment is defined as one that could be physically fulfilled at any time, but that the Torah has mandated is to be done only at specific times: if not fulfilled at that specific time, there is no way to “make up” the mitzvah. This category includes all holiday related mitzvot (shofar, sukkah, and lulav, etc.), as well as mitzvot that need to be fulfilled during certain parts of the day or week (such as tzitzit, k’riat Shema, and tefillin). Matzah on Pesah and kiddush on Shabbat are exceptions in which the Torah specifically obligates women. May a woman choose to fulfill a mitzvah from which she is biblically exempted? If so, what is halakha’s attitude toward that fulfillment?

May she say the berakhah that accompanies the act of the mitzvah? The first question is explicitly addressed in a comprehensive mahloket (disagreement) in the gemara between R. Yehuda, who forbids women from fulfilling certain mitzvot from which they are exempt, and R. Yose and R. Shimon, who allow it. This mahloket originates in the tractate of Hagiga 16b where the gemara discusses whether a woman may perform semikha on a korban (the placing of one’s weight on one’s sacrificial animal before it is sacrificed), a mitzvah in which the Torah only obligates men. R. Yehuda does not allow women to practice semikha whereas R. Yose and R. Shimon do.

The gemara applies this mahloket to three other mitzvot and assumes that the same disagreement would apply. In the tractate of Rosh Hashana 33a, the gemara states that R. Yehuda would not allow a woman to blow shofar on Rosh Hashanah whereas R. Yose and R. Shimon would. Eruvin 96a-96b applies this mahloket to the issue of permitting women to wear tefillin and perform aliyah la-regel (ascent to Jerusalem to bring sacrifices on Pesah, Shavuot, and Sukkot). This gemara posits that the rabbis didn’t prevent King Saul‘s daughter Mikhal from wearing tefillin or the wife of Jonah from performing aliya la-regel, therefore the rabbis clearly agreed with R. Yose and R. Shimon against R. Yehuda.

What is the conceptual difference between the two sides of this mahloket? Rashi (Rosh HaShana 33a) suggests that R. Yehuda thinks that performing a mitzvah from which one is exempt is a violation of “bal tosif,” the prohibition against adding mitzvot to the Torah. Most opinions reject this suggestion since “bal tosif” is understood as a prohibition against adding a 614th mitzvah or adding detail to an existing mitzvah (such as a fifth species to be taken on Sukkot), and not against one’s fulfillment of an existing mitzvah despite a Biblical exemption. The Talmudic commentaries known as the Tosfot (Eruvin 96a) offer a different conceptual basis for the mahloket. They suggest that R. Yehuda specifically forbids women from fulfilling semikha, shofar, tefillin and aliyah la-regel, because their fulfillment of each of these mitzvot would violate a rabbinic prohibition, and a woman who is not obligated cannot be allowed to violate the rabbinic prohibition in order to perform the mitzvah.

The Case of Shofar Blowing

For example, it is rabbinically prohibited for anyone to blow a shofar on Shabbat and Yom Tov (all holidays including Rosh Hashanah). A man, however, may disregard the rabbinic prohibition against blowing shofar on holidays to fulfill his Torah obligation to hear shofar on Rosh Hashana. R. Yehuda would not allow a woman to disregard the prohibition to fulfill a mitzvah in which she is not obligated. According to the Tosfot, even R. Yehuda would allow women to fulfill mitzvot from which they are exempted if no rabbinic violations occurred (such as sitting in a sukkah or taking lulav).

How then, can R. Yose and R. Shimon allow women to violate rabbinic prohibitions to fulfill mitzvot from which they are exempt? The Tosfot don’t provide the answer but other authorities explain that the Torah was given to B’nei Yisrael, to the people of Israel as a community that included men and women. Despite the fact that women were subsequently exempted from particular details, the whole Torah retained its significance for women.

Therefore, women still have a “kiyyum d’oraita” (biblical fulfillment of a mitzvah) when a woman fulfills a mitzvah from which she is exempted even though she has no “hiyyuv d’oraita” (biblical obligation). This kiyyum d’oraita allows a woman to violate the rabbinic prohibition involved in the mitzvah’s fulfillment just as a man may, for example, violate the rabbinic prohibition of blowing a shofar on the yom tov of Rosh Hashanah in order to biblically fulfill the mitzvah of t’kiat shofar. The halakhic authorities overwhelmingly rule like R. Yose and R. Shimon, partly because of the gemara in Eruvin that states that the rabbis ruled against R. Yehuda, and partly because R. Yose and R. Shimon’s position is more logical.

There is a talmudic concept that one who is commanded in a mitzvah receives a greater reward for one’s fulfillment of that mitzvah than one who is not commanded, indicating that a reward also exists for the exempted one. (If exemption meant prohibition, there would be no reward at all. The Rambam (Laws of Tzitzit, Chapter 3) states that despite their exemption, women may choose to wear tzitzit “…and likewise, [all] other positive commandments from which women are exempt, if they want to fulfill them…we do not prevent them.”

The Shulhan Arukh in Orah Hayyim 589:6 rules that despite their exemption, women may blow shofar. In fact, a man who has already fulfilled his mitzvah can blow shofar for a woman; her kiyyum d’oraita is important enough for someone else to violate a rabbinic prohibition so she can fulfill the mitzvah.

It is interesting to note that there is later rabbinic opposition to women fulfilling the mitzvot of tzitzit and tefillin, despite the fact that tefillin is one of the paradigms of the mahloket between R. Yehuda and R. Yose/R. Shimon where we rule like the latter and the Rambam uses tzitzit as his paradigm for allowing women to fulfill all mitzvot aseh shehazeman gerama. This issue is beyond the scope of this article.

May a woman make berakhot on mitzvot which she may, but is not obligated to, fulfill? Here there is a split between most Sephardic decisors, based on the Rambam, who do not allow women to make these berakhot and Ashkenazic decisors, based on Rabbeinu Tam, who do. The Sephardic decisors maintain that to say “…asher kiddeshanu bemitzvotav v’tzivanu (who has sanctified us through his commandments and has commanded us)” in the berakha is an untruth since women are not commanded to fulfill these mitzvot. Besides being an untruth, this berakha could be a real problem of bal tosif (i.e., maintaining that women are Biblically obligated in mitzvot aseh shehazeman gerama would add a detail to the original Biblical command).

This berakha would also create problems of berakha l’vatala (a berakha that invokes God’s name to no purpose). Ashkenazic decisors would agree that although stating that women are obligated in mitzvoth aseh shehazeman gerama would be untrue (and possibly a violation of bal tosif), that is not what a woman is saying when she recites the berakha. Rather, she includes herself in the klal Yisrael that received the Torah and was commanded as a whole — if not as individuals — to perform these mitzvot. (It should be stressed, however, that the berakha is a rabbinic addition to the biblical mitzvah, and the inability of Sephardic women to make the berakha for these mitzvot, does not change how the halakha views a woman’s fulfillment of the biblical command or the value of that fulfillment.)

Regardless of the detail of whether or not to make a berakha, all streams of halakhic pesak reject R. Yehuda’s position, allowing — and even seeing as exemplary — the voluntary fulfillment of a woman’s kiyyum d’oraita.

Pronounced: yome TOVE or YUN-tiff (Yiddish), Origin: Hebrew, alternates are Yiddish, literally “good day,” it refers to a holiday in which traditional Jews refrain from work and observe many of the same restrictions observed on Shabbat. 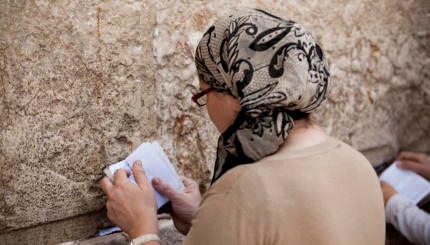 Not part of the fixed liturgy, women used these prayers to commemorate special holidays and special times in their lives.

One Small Sound for Women, One Large Blast for Womankind.

On the first day of Rosh Hashana I was invited to call the kolot (sounds) for the shofar. I must ...

How the Unnecessary Became Necessary

I come from a rather Modern Orthodox, Ashkenazi family that is composed mostly of women. The only male in my ...