There is much confusion about the topic of animal rights, animal suffering, and whether Judaism recognizes the concept of conservationism to protect species from extinction. Let us study this matter to see what we can learn about our role on the planet and our responsibility to the environment.

Our interest in this matter stems from the idea that a deeper understanding of the Torah’s view on animal suffering can lead a person to become more compassionate of other people’s feelings, and neglect of this matter can lead to the reverse. In fact, many serial killers had a childhood history of perpetrating grotesque and sadistic acts upon animals. So it is not unreasonable to say that the way an individual or society treats its animals is a reflection of how it treats others as well.

In certain areas the Torah seems to be highly compassionate toward animals, such as the biblical commandment to send away the mother bird before taking eggs from a nest found in the wild, known as “shiluah haken” (see Deuteronomy 22:6) and the biblical prohibition against slaughtering a mother animal and its child on the same day, known as “oto v’et Beno” (see Leviticus 22:28). Additional examples of biblical prohibitions that appear to be based on compassion for animal suffering are: “Do not plow with an ox and a donkey together” (Deuteronomy 22:10) and “Do not muzzle an ox on the threshing floor” (Deuteronomy 25:4).  We also find a general prohibition in the Gemara [Talmud] against causing animals pain, known as “tzaar baalei hayim” (see for example Bava Metzia 32b), and a requirement to feeds one’s animals first before feeding oneself (Berakhot 40a).

However, the Torah also condones and permits the eating of animals, as well as sacrificing them to achieve atonement for our sins (korbanot). In particular, the mitzvah of eglah arufa is most ironic: When a corpse is found outside a city and the murder is unsolved, there is a requirement upon the elders of the most populated and closest city to atone for this crime against an innocent person. How is this done? By means of breaking the neck of an innocent and helpless calf (see Deuteronomy 21:1-9).

How can we explain the Torah’s selective regard and disregard for animals? What lessons can we learn from these confusing and mixed messages about our responsibilities and compassion for animals?

A fundamental source for this discussion comes from the Gemara in Berakhot (33b) which discusses an incorrect practice certain cantors had of inserting a prayer  praising God for having mercy on the mother bird (referring to the mitzvah of shiluah haken). One reason offered by the Gemara as to why the sages disapproved of this prayer is:  “For such a statement implies God’s character is influenced by compassion, when in fact his actions are purely decrees.”

Taken at face value, this statement is extremely difficult, for it implies that God does not act out of mercy, when in fact the Torah in other places refers to God as merciful (see for example Exodus 34:6). Clearly then, the Gemara must be referring only to animals and not humans. In other words, the Sages frowned upon praising God in prayer for having mercy on animals through the mitzvot of shiluah haken and other similar mitzvot because at least in regard to animals, God does not act out of mercy. However, this too is very difficult to understand at face value because any common sense interpretation of the mitzvot discussed above can only lead one to believe that their purpose is related to showing compassion and mercy for God’s creations; any other interpretation is counterintuitive.

Therefore, this Gemara is interpreted differently by Ramban [Nahmanides] and Rambam [Maimonides], each of them endorsing the idea that indeed Torah ethics require us to treat animals mercifully, and this is in fact the basis for these mitzvot. However, there is a difference of opinion between Rambam and Ramban which leaves us with two different perspectives on animal suffering and conservation.

The reason behind the mitzvah of shiluah haken and oto v’et beno are to prohibit one from slaughtering the child in front of the mother’s eyes. For animals suffer extreme anguish because there is no difference between the anguish felt by a human or an animal; the love of a mother for its child does not come from the cognitive domain [rather, the emotional domain].

As far as the Gemara in Berakhot is concerned which is in direct opposition to this idea, Rambam’s answer is that this Gemara is in accordance with a minority opinion, which holds in general that we are not allowed to seek reasons for the mitzvot. Therefore, the Gemara frowns upon any suggestion that the reason for this mitzvah is God’s mercy. However, in point of fact, Rambam rules that not only is it permitted to study and speculate the reasons for the mitzvot, it is also to be encouraged.  See Yad, Hilkhot Temura 4:13, and Hilkhot Meila 8:8.) Therefore, Rambam believes the opinion expressed in this Gemara is not the halacha (Jewish law).

While Rambam’s position is that indeed animals do suffer, because in terms of their emotions, they are similar to humans, Ramban’s position is more limited (see commentary of Ramban, Deuteronomy 22:6.)  He holds the Torah is obviously not concerned for the feelings of animals per se, as we see in the fact that we are permitted to eat them and use them as sacrifices. However, the Torah does not want us to engage in behavior that is subjectively cruel because it can lead us to evil character traits, even if objectively, the animal is not suffering. Ramban suggests these mitzvot teach us to behave with mercy and kindness, and in addition, they also promote a conservationist awareness to be careful not to cause an entire species to become extinct. This is symbolically represented in the prohibition of not slaughtering mother and child at the same time.

Presumably, Ramban’s position is that animals do not have enough intelligence or self-awareness to suffer, and therefore the Gemara is Berakhot finds it incorrect and foolish to praise God for having mercy on them when in other places the Torah permits their slaughter. Nevertheless, subjectively, humans are prohibited from treating them sadistically in order to cultivate the qualities of mercy and environmentalism.

There seems to be strains of thought within certain conservationist and environmentalist camps that wish to promote the equality of animals by highlighting the cruelty and arrogance of man and his insignificance in the scheme of the universe. While some who put forth these ideas may have noble intentions I believe part of this idea stems from a wish to reduce man to the status of animals instead of merely protecting the rights of animals. The unconscious payoff for such a belief system is the creation of a more permissive environment for humans. After all, if we are basically animals, how can we be blamed for behaving in a morally loose fashion? But we do not share in this belief.

Rather, we believe that a deeper understanding of the Torah’s view on animal suffering can lead a person to become more compassionate of other people’s feelings, and to assume our moral responsibilities as caretakers of the world.  A deeper compassion for animals will help us all to strengthen our character and improve our actions to protect the world.

This article was printed as part of the Tu Bishvat Learning Campaign, sponsored by Canfei Nesharim, an organization that is educating the Orthodox community about the importance of protecting the environment. For more information, visit www.canfeinesharim.org. 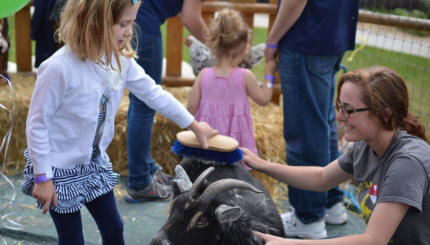 Compassion That Can Bring Messiah

It all begins with how we treat animals.