The Month of Elul

Elul is the last month of the Jewish year and the final month prior to Rosh Hashanah, the Jewish new year. This is a month in which to spiritually prepare for the High Holiday season of reflection and repentance.

Elul is traditionally a time of introspection and personal stock-taking, known in Hebrew as cheshbon hanefesh — literally “an accounting of the soul.” This process is conducted in preparation for Rosh Hashanah when, Jewish tradition teaches, all of humanity is called to account and a divine judgment is issued. The customs associated with Elul are all intended to help cultivate the proper mindset for this preparation.

Perhaps the best-known Elul tradition is the blowing of the shofar every weekday after morning services. As on Rosh Hashanah, the daily shofar blasts are intended to rouse us from complacency and jolt us into repentance.

It is also customary to recite Psalm 27, which speaks of the assurance of God’s protection and includes a plea that God not forsake his people, daily during the month of Elul.

Some Jewish communities also begin reciting the penitential prayers known as Selichot at the beginning of Elul, though the most common Ashkenazi custom is to recite them only in the days immediately preceding Rosh Hashanah.

Rabbi Alan Lew, in his book This is Real and You Are Completely Unprepared, observed that the weekly Torah readings during Elul also offer subtle cues to wake up and take stock of one’s life.

The next portion is Parashat Shoftim, which instructs the officers of the Jewish army to release from battle anyone who has built a home they have not yet inhabited, planted a vineyard they have not yet harvested, or betrothed a woman but not yet married her. The point being that those with unfinished business, whose attention may be compromised, are a danger to themselves and others. At a time of year when we contemplate our lives and our mortality, this serves as an invitation to consider what unfinished business is tearing at our hearts.

Parashat Ki Teitzei continues with the laws of war. At the beginning of the portion, the Torah requires that if a soldier sees among the captives of war a beautiful woman he desires, he must first take her into his home, shave her head, cut off her fingernails, and remove her dress. For a month, she must remain in the soldier’s home mourning for her family before she can be taken as a wife. In Lew’s telling, this law demands that rather than impulsively ceding to our desires, we watch them and see what deeper truth reveals itself.

One of the best-known teachings about Elul is that the four Hebrew letters of the month’s name are an acronym from the verse in Song of Songs: Ani l’dodi v’dodi li (“I am my beloved’s and my beloved is mine.”). Song of Songs is understood to be an allegory in which the lovers are God and Israel. Elul is thus understood to be a time of recommitting to our relationship with God.

Another teaching, attributed to Shneur Zalman of Liady, the founder of the Chabad Hasidic sect, compares God to a king who is normally ensconced in his palace where he is merely glimpsed or addressed through intermediaries. But during Elul, the king comes out to the field and can be approached by any of his subjects.

Both these teachings point to the idea that Elul is a time of divine closeness, a period where connection to God comes easier than at other times of the year. As such, it is an auspicious time to do the inner work of repairing and deepening one’s relationship with God.

Want to learn more about the High Holidays? Sign up for a special High Holiday prep email series. 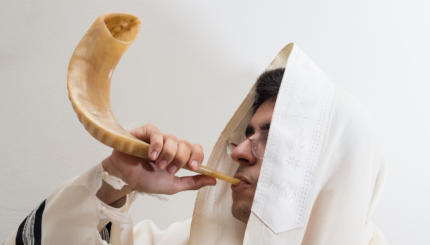 The ram's horn is blown on the High Holidays in three specific ways.