Perhaps no Jewish scholar in the modern era has bequeathed us as rich a body of spiritual resources to face periods of intense challenge as Rabbi Kalonymous Kalman Shapira.

Also known as the Piaseczno Rebbe, Shapira lived, wrote and perished during the Holocaust. Born to a distinguished rabbinic family, Shapira was recognized as a spiritual illui (prodigy) at an early age and wrote a number of books that represent a sort of spiritual curriculum for students of varying ages.

The outbreak of the war interrupted his role as an educator. After the Nazis invaded Poland, Shapira was interned in the Warsaw Ghetto, where he wrote the last piece of Hasidic thought penned in prewar Europe, a Torah commentary called “Torah from the Years of Rage.” Along with several other works, the commentary was buried in the foundation of a hearth and discovered after the war. The commentary was published under the title “Aish Kodesh” (The Holy Flame), a startling name by which Shapira himself came to be known.

He died on November 3, 1943 at the Trawniki labor camp during what came to be known as Operation Harvest Festival, the largest massacre of Jews during the war. In his life and in his death, Shapira uniquely embodied both the promise and the loss of this period of Jewish history.

Three specific foci of his work may be of help to us as we face our own moments of extreme difficulty and the attendant fear, anxiety and disquiet they can often provoke.

One of Shapira’s tools was called the Quieting Meditation. We learn of it from the writings of an unnamed student of Shapira that I translated in the book “Conscious Community: A Guide to Inner Growth.”

We wish to stem the flow of thoughts and impulses that is endemic to the working of the mind. This flow of thoughts is highly associative, and it is very difficult for a man to extricate himself from it. The rebbe then gave us concrete advice about this quieting. He said first that one simply watches for a set period of time, observing his thoughts. One will gradually notice that the mind is emptying, the thoughts are slowing a bit from their habitual flow. Then, one must repeat a single verse or phrase to insert holiness into the now still mind.

The repetition of a verse or phrase helps to counter the agitation that comes from ceaseless thoughts and serves to reinforce its opposite, a mind at peace. This kind of phrase meditation is called a tikkun, which literally means “fix” or “adjustment,” but can also be understood as a kind of spiritual medicine. This “phrase medicine” can help us nurture a sense of trust, patience, acceptance, and provide a respite from racing thoughts.

The rebbe suggested words from the psalms, a song you know or a personal phrase. All these can help to gently reinforce a supportive thought, realign our distressed feelings and internalize a wider perspective. For example, for confusion, Shapira suggested this verse from Psalm 86: “Teach me Your way, O Lord; I will walk in Your truth; let my heart be undivided in reverence for Your name.” For distress, be recommended this one, from Psalm 27: “When my enemies and foes attack me, they will stumble and fall. Though an army besieges me, my heart will not fear.”

Another idea Shapira returns to frequently in his writing is the notion that prayer can only emanate from an authentic awareness of how we are feeling. Prayer that is not connected to feeling is empty, even if those feelings are difficult and hard to face.

Shapira said that there is a secret gate — the gate of grief, a hidden place where God goes to shed tears. The hiding of God’s presence is a common metaphor for times of collective suffering, but Shapira tells us that in these moments God is hiding away and crying along with us. Our grief is experienced, as it were, by the Creator. God too feels our isolation, rage and fear. When we do not abandon our true feelings, we are not abandoned. We are in fact connected with the heart of the one who made us.

“There are times,” Shapira wrote, “when a person wonders about himself thinking: ‘I am broken. I am ready to burst into tears at any moment …’ He is lost inside his introspective, self-analytical confusion … the pain and grief he suffers over his own isolation, alone, can break a person … but the crying a person does together with God makes him strong. He cries and takes strength. He is shattered and then emboldened …”

Finally, be kind — even under extreme duress. This particular teaching comes to us through a story made famous by the rabbi and storyteller Shlomo Carlebach, who told of a bent man he once met on the street in Tel Aviv, a “holy hunchback,” who had studied in Shapira’s yeshiva in Poland. The man described how between courses of Friday night meals, Shapira would teach about the weekly Torah portion. The man couldn’t recall the specific teachings, but he remembered that Shapira would repeatedly enjoin his students: “The greatest thing in the world is to do somebody else a favor.” He said this so often, the man could still hear the voice in his head years later.

When he was later deported to Auschwitz, the holy hunchback nearly fell into despair, but he remembered Shapira’s teaching. “Do you know,” he asked Carlebach, “how many favors you can do in Auschwitz?” Performing acts kindness for his fellow inmates was one of the things that made life bearable in Auschwitz.

Kindness, caring and generosity have life-giving properties. Whether in Auschwitz or in our own moments of grief and despair, we can always do one another favors. 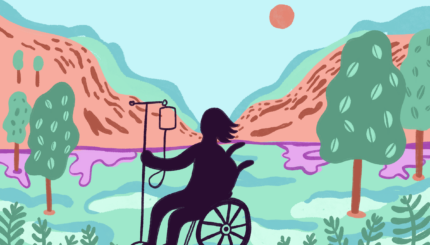 Hasidic Wisdom for the End of Life

What we can learn from the deathbed stories of Hasidic rabbis.

The Chabad Rebbe’s Yahrtzeit: The Third of Tammuz

Remembering the death of the Lubavitcher Rebbe