Sefer Vayikra, the Book of Leviticus, is at the center of the Torah, not only spatially, but also spiritually. More than any other single book, Vayikra sets the tone and establishes the central themes of biblical and rabbinic Judaism throughout the ages.

The central focus of Vayikra is on establishing a sacred community — “a nation of priests” whose daily deeds perfect the world under God’s rule. By establishing an ideal community, Vayikra recognizes that deeds speak far more eloquently than words, that living in a holy community can provide a sense of God’s presence far more pervasive than more ethereal approaches. So far, so good.

Few modern Jews would have any problem, at least in theory, with those general remarks. Our problem starts when we examine how Vayikra defines the detailed practices of a sacred community. What kind of deeds and activities create the core of Vayikra’s vision?

When we think of religious devotion, we tend to picture silent meditation, appreciation of nature, perhaps even a commitment to ethical living. But the connection between killing animals and serving the Lord escapes us completely.

To understand our own sacred heritage as Jews, to appreciate the religious perspective that emerges from the Torah, the Talmud, and most later Jewish writings, we must come to an understanding of the centrality of Temple ritual and of sacrifice.

Objections to animal sacrifice readily abound: It’s bloody, it’s barbaric, it is too physical, too particular, too ugly. Sacrifice is violent, uncontrolled, and primitive. All true. But so is life. And it is precisely in that paradox that we can first recognize the power — if not the aesthetics — of sacrifice.

Life in not neatly packaged, fully controllable, or completely comprehensible. Life includes tragedies of staggering proportions, disappointments of trivial pettiness, jealousies, violence and rage. Each one of us contains many layers of feelings, drives and convictions. Only the surface — most layer of our personality is verbal, cheerful, and polite. The deeper layers of the human psyche are nonverbal, contradictory and impulsive. They include drives toward lust, anger, gratification, jealousy and safety.

Each of us contains the person we were at every previous stage of development — all previous ages we have ever lived. All of those competing levels and drives require some mode of expression. If we attempt to deny them, and consequently to stifle them, they will erupt in destructive or inappropriate ways.

For Judaism to be able to assist us in living, it must reflect all life. Judaism must be the haven in which we can safely channel and express the entire range of human impulses and drives, confront our own subconscious, relive our own past, face and share our deepest anxieties. If it cannot be at least this, then it is nothing.

Sacrifice horrifies and stuns precisely because it embodies so many subconscious drives and terrors. We need not reinstitute sacrifice to be able to benefit from recalling this ancient practice in the safe context of a worship service. Are you afraid of death? Confront it by reading about sacrifice. Are you ridden with guilt? Represent and conquer your guilt in the Yom Kippur ritual of the scapegoat and sacrifice.

Our ancestors turned to animal sacrifice because they saw in it a way to express deep rage, feelings of inadequacy and guilt. They could use the rite of sacrifice as a means of facing their terror of death and the unknown. They could, through sacrifice of animals, see their own frailty, their own mortality, and their own bloodiness.

In our age, a period of sanitized religion and everyday violence, escalating drug abuse and rising poverty, the practice of our ancestors has something yet to teach. And so we read Sefer Vayikra, and learn to see our fears in the eyes of an animal going to the slaughter, in the cries of the victims of sacrifice. 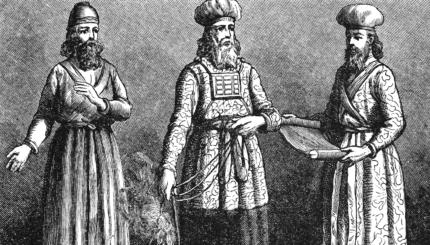