In last week’s Torah portion (Parashat Balak), Pinchas sent a spear through an Israelite and a Midianite woman simply because they were having a relationship. In this week’s portion, the title of which indicates the esteem in which the Rabbis held him, Pinchas’ reward is described: He is placed in line for the priesthood. While I understand that documentary critics of the Torah explain the political reasons for such an action, I am still stuck with its message, even if it is edited into the text.

Sometimes the crux of the portion just sticks in my gut and I can’t seem to find its transcendent message. Sure, any Torah portion has many things to say and I could easily avoid its primary lesson. And I recognize the teaching of my youth about not turning a text into a pretext for saying something else. The message of this parsha — which begins in last week’s Torah portion— is worsened in this week’s reading.

However, it seems that not everyone is happy with Pinchas’ action nor his reward. Immediately thereafter a census is taken of the people, presumably once again to determine the readiness of the people for war. Are they really prepared to stand behind Moses? Were they chastened by Pinchas’ actions? Were they emboldened by the act and its reward?

It is clear that the Torah text is implying that the census is meant to appraise the disposition of the people after such actions. The long listing of the various clans seems to be included to indicate who supported the action or who was indeed prepared to take conquest of the land.

But then comes the final story in this narrative— an insertion of the plight of the daughters of Zelophehad. In this oft-reported case, Zelophehad dies without sons. Thus, there is no one in the family to legally inherit his land and belongings. His daughters make a plea that they should be entitled to their father’s estate. Moses brings their case before God, and God rules in favor of the five women. This decision established an important precedent in Jewish law that has been cited for generations by those who seek gender equality in Judaism.

It is clear to me that there is a connection between these three stories. The last one is introduced to soften our judgment against Moses and God. It is as if to say, “Well maybe they aren’t so bad. After all, look how they supported the daughters of Zelophehad.”

I realize that we can’t expect to approve of all of the actions contained in an ancient saga about a group’s journey to become a people. But I also realize that even if we agree that sometimes the ends can justify the means, we don’t have to simply accept what is contained in the text and then act as apologists when see things with which we don’t agree.

There are still those among us who applaud Pinchas’ actions, even if they would shy away from such a violent approach. Nonetheless, their underlying attitudes are the same. And if we are to be a people that welcomes in the stranger, as it teaches us in the same Torah that retells the story of Pinchas, then such attitudes have to change.

This commentary is provided by special arrangement with Big Tent Judaism, an organization dedicated to creating a more open and welcoming Judaism.

As Jews, we must express our religious imperative to ensure equal access to land. 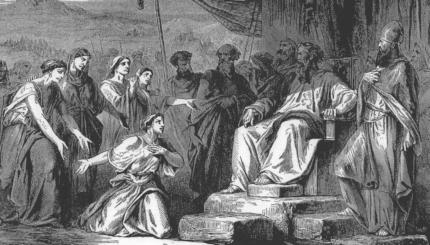 Zelophehad's daughters call to us to take hold of life with our own hands.