Much can be learned, in terms of social graces and religious etiquette from the korban todah, the thanksgiving offering detailed in this week’s parshah. Rashi, basing himself on the Talmud, lists the four who bring a todah: one who returns from travel at sea; one who returns from a journey in the wilderness; one who is released from prison; and one who recovers from an illness.

This comment of Rashi requires an explanation. We know that bringing a thanksgiving offering is not obligatory; it is a voluntary heartfelt gesture. The priests and the courts could never demand that someone bring a todah.

How can Rashi then imply that specific cases require one to offer an animal as evidence of his thanks?

We might better understand the korban todah as a moral requirement, not a legal one. Accordingly, the Gemara uses the term tzrichin (should), implying that one is expected to bring a todah as prescribed by the Gemara.

If the Gemara intended to obligate one to bring an offering in these four cases, it would have used the term chayavim, which indicates a halachic (Jewish legal) imperative. This distinction not withstanding, one can still claim that offering thanks is, in fact, required.

Our need to thank Hashem and be cognizant of His kindness in an actively expressive way is an ethically binding commitment. The Chovos Halevavos (Duties of the Heart by Bachya ibn Pakuda, 11th century Spain) explains that the entire foundation of our service to God flows from our recognition that we owe the A-mighty our thanks.

Although the bringing of this offering is not, in the formal sense, an obligation, it is nonetheless required as an expression of one’s ethical personality.

Moreover, the korban todah–an expression of thanks for an event that assumes the importance of a miracle–was eaten only during the very day it was brought. As miracles occur daily for our benefit, the Gerer Rebbe explains, we must recognize and thank Hashem every day for His help. It is not sufficient that we gave thanks yesterday. Every day brings new opportunities to appreciate God’s goodness to us, and we must express our thanks in a timely manner.

Furthermore, the Abarbanel (15th century Spanish/Portuguese commentator) notes, since the meat had to be finished that day, the offerer was encouraged to invite relatives, friends and neighbors to eat and celebrate with him. They would be curious to know the reason for the celebration, and he would have the opportunity to share the great wonders of God that precipitated the offering. Such an experience would engender positive and fruitful discussion and involvement.

Were more time provided to eat the offering, there would be less pressure to share. Implied, then, is an added understanding of the concept, “A mitzvah (commandment) that presents itself–do not let it sour.”

By creating the need to share the korban todah experience, one shares the joy and the example of his appreciation, and thereby expands the faith of the community and its appreciation for God’s grace and goodness.

Sometimes Not Only An Animal Was Sacrificed

Our spiritual leaders must always remember that the sanctity of human life should never supercede devotion to God. 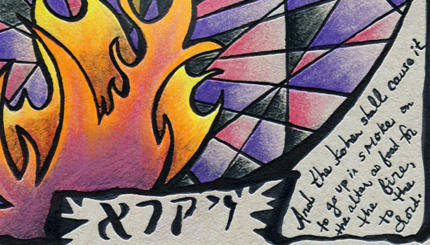 Parashat Vayikra: I Give, Therefore I Love

This Torah portion teaches that it’s better to give than receive.