The Torah is obsessed with memory. Again and again, we are commanded to remember our experiences and to act in ways that honor those memories.

Most famously, the Torah enjoins us repeatedly to remember that we were slaves in the Land of Egypt and that God liberated us from slavery. Much of the Torah is an attempt to discern the implications of that experience: We were slaves and know the bitter taste of estrangement and degradation, therefore we set out to create a society in which no one is estranged or degraded. Jewish memory is thus the source of Jewish ethical passion. The culmination of Jewish ethics is the commandment to “love the stranger” (Leviticus 19:34) because we ourselves “know the feelings of the stranger” (Exodus 23:9).

But the Exodus is not the only story we are enjoined to remember. At the end of this week’s portion, we read a passage also recited on the Shabbat before Purim. This time, we are called upon to remember the horrific behavior of the Amalekites:

“Remember what Amalek did to you on your journey, after you left Egypt–how, not fearing God, he surprised you on the march, when you were famished and weary, and cut down all the stragglers in your rear” (Deuteronomy 25: 17-18).

Here, too, memory has a consequence, this one ostensibly much different in tone from the mandate to love the stranger:

“Therefore, when the Lord your God grants you safety from all your enemies around you, in the land that the Lord your God is giving you a hereditary portion, you shall blot out the memory of Amalek from under heaven. Do not forget!” (Deuteronomy 25: 19).

In the Jewish imagination, Amalek is the quintessence of evil, and if we read these verses carefully, we can begin to see why. Imagine a people dehumanized and enslaved for literally hundreds of years, a people who have all but abandoned hope of ever experiencing freedom and liberation. Finally, after generations of unmitigated suffering, God frees them, and they take their first very tentative steps toward freedom. And what happens? Another nation, utterly devoid of compassion, mercilessly attacks.

It is an act of terrifying cruelty to attack a people who have known only sorrow and degradation for so long, a people exhausted in both body and spirit. But it is an act of unimaginable barbarism to attack precisely that part of the vulnerable people that is most vulnerable–the “stragglers in [the] rear.”

The biblical text is exquisitely careful here to make these two critical points: First, that Amalek attacks Israel just as Israel first tastes the possibility of freedom; and second, that it attacks the weakest among an already weak people. This is the ultimate nadir of human behavior: There is no greater sin than attacking the utterly defenseless. To act in such an egregiously degrading way is to betray, as our text says, an utter lack of “fear of God.”

But if we read closely, we come upon a magnificent textual ambiguity (which is clear in the Hebrew, but difficult to capture in translation). In describing the scenario under which Amalek attacks Israel, the text tells us that one of the parties “did not fear God” (velo yerei e-lohim).

This phrase is usually (as in the translation offered above) taken to refer to Amalek: Amalek is undeterred by fear of God, so it allows itself acts of unspeakable savagery. But it can just as easily be understood to refer to Israel; it is Israel who fails to fear God in our story. How so? If Amalek is able to attack the stragglers in the rear, then somehow the weak and exhausted have been left vulnerable and exposed.

The Jewish people have just experienced the Exodus, the fundamental lesson of which is to love and protect the vulnerable–and here is a segment of the people left totally unprotected and exposed to violent danger. So neither Amalek nor Israel seems to truly fear God: The one because it attacks the weak, the other because it fails to protect them.

Like the Exodus story, the Amalek story comes with an obligation to act. This time we are not told–at least not explicitly–to learn compassion from our enemies’ lack thereof, but rather to “blot out the memory of Amalek from under heaven.” Traditionally, this was read as a commandment to kill off the literal descendants of Amalek, a commandment that was, however, neutralized and rendered non-normative by the interpretations of later rabbis.

I want to suggest an alternative reading of this deeply troubling verse. Note the situation described: “When the Lord your God grants you safety from all your enemies around you” and allows you to settle securely in the Land of Israel. It is then that we are instructed to blot out Amalek’s “memory.”

What the Torah has in mind here, I think, is not that when we are powerful we should seek to kill an actual people who once tried to kill us; the Torah does not advocate meeting barbarism with barbarism, and certainly not meeting the grandchildren of barbarians with barbarism. (It is this week’s portion, after all, that tells us in no uncertain terms that “Parents shall not be put to death for children, nor children be put to death for parents.”)

A Society With No Amalek

Instead, the Torah tries to tell us here that when we are safe, secure, and powerful, we must take extreme care that we not reproduce the kind of moral callousness embodied by the biblical people of Amalek. To “blot out the memory of Amalek from under heaven” is to create a society in which it is unimaginable that the weak will be left exposed, let alone that the strong will actually attack them and inflict further harm. A society that takes seriously the God-bestowed dignity of every human being–regardless of her ability to bear arms or defend herself–is a society that stands as a direct counter-testimony to the evil represented by Amalek and thus helps to eliminate the savagery and inhumanity for which Amalek stands.

Amalek is thus not a people to be killed but a type of behavior to be rooted out. One who labels other people Amalekites runs the risk of himself behaving like an Amalekite; one who sees certain actions as Amalekite in nature is likely to avoid them–and ideally even to struggle for a world in which such actions are utterly obsolete.

Our text ends with a striking paradox. The commandment to blot out the memory of Amalek is followed by the injunction not to forget. How can it be that we must eliminate the very memory of evil and vigilantly remember it at one and the same time? Here the Torah tries, I think, to evoke and respond to a deep truth about human beings and our capacity for evil and violence: It is only by being profoundly aware of our capacity for evil that we are able to choose against it.

Self-awareness, even and perhaps especially of our darker sides, is the key to our freedom; to bring the monster into view is no longer to be enslaved by it. Thus, we are commanded to blot out the kind of evil inhumanity that Amalek represents. How? By remaining constantly aware–no matter how unpleasant–of the Amalekite possibilities inherent in each of us. Thus, the Hasidic master Levi Yitzhak of Berditchev tells us that we must all struggle with the “bad part called Amalek which lies hidden in our heart.” Rather than kill other people, we are beckoned to struggle with the deepest ugliness than lies within us.

The Torah is, of course, not telling us that we are evil. It is only warning us that we are capable of evil acts–indeed, that all human beings are capable of evil acts. We remember the twin experiences of enslavement and liberation, and we seek to cultivate compassion; we remember the horrors of being attacked when we were most vulnerable, and we seek to control whatever parts of us might be capable of similar actions. In both cases, we seek to create a society and a world which embodies those values that Egypt and Amalek sought to eradicate–love, compassion, holiness, justice, and the infinite dignity and worth of every human being.

Reprinted with permission from Beliefnet.com. 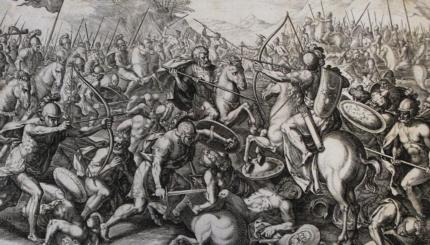 Ask the Expert: Blotting out Amalek

Are we really supposed to wipe out a nation — and who are they?

At its core, this festive holiday grapples with deep and even troubling themes.