Reprinted with permission from Back to the Sources: Reading the Classic Jewish Texts.

The Shema proper is surrounded by three extended berakhot (blessings). (As a unit within the prayerbook, the whole structure of the Shema plus its blessings is itself called the Shema.) The three berakhot deal respectively with the themes of creation, revelation, and redemption; the Shema proper comes between the second and the third blessing.

To read the full text of the Shema and its blessings in English, click here.

The sequence creation-revelation-redemption forms the essential theo­logical drama of Judaism. There is a clear recapitulation here of the movement of sacred history as enacted in the Bible and interpreted by the rabbis: the formation of the world in Genesis, the giving of the Torah at Sinai in Exodus, and the messianic age-to-come as prefigured by the liberation from Egypt.

Yet history is only one level at which these prayers speak. Creation-revelation-redemption are presented not just as events located in the mythic past or the future, but also as processes ongoing within the life of the individual and the people. The first berakhah, for example, forcefully underscores this dimension when it declares that God “through His goodness daily renews the work of creation.” Lest we lapse into an alienated conception of an Aristotelian prime mover, the text insists that the God of Israel continues in His moment-to-moment authorship of our reality.

The berakhah on Creation is the longest, encompassing fragments of ancient poetic litanies and a depiction of the acclamations of the angelic choruses. It is also one of the places where the hand of the rabbis in shaping the liturgy out of biblical materials is most conspicu­ous. Take the opening statement of the berakhah:

“Praised be You, O Lord our God, King of the universe, Who forms light and creates darkness, Who makes peace and creates all things.”

Now take its source in Isaiah 45.7; God is the speaker:

The rabbis have changed the Isaiah verse from the first person to the third and absorbed it into the berakhah formula. But they have gone further; they have done nothing less than tamper with the biblical text by emending evil into the euphemized all things. In truth, this is not a gross violation. By setting up a series of antitheses (light/darkness, peace/evil), Scripture intends to convey the sense that God is the source of all phenomena, from A toZ, so to speak. The rabbis’ “all things,” then, is not far off the mark. The change, however, is more than a helpful gloss. While they too believed that God was the author of bad things as well as good, after the catastrophes that had befallen the Jewish people, the rabbis felt that in the context of prayer it was appropriate to underscore God’s merciful nature. The berakhah on Creation was sup­posed to inspire awe of the glory and plenitude of the world. For the rabbis, “all things” told the truth, yet did not sound the minor chord of the original.

The shaping hand of the rabbis is also evident in the second berakhah of the Shema cycle, which begins, “With abounding love You have loved us, O Lord our God; with unshifting tenderness You have graced us,” and concludes, “Praised be You, O Lord our God, who chooses His people Israel in love” (p. 75). The choice in love is the covenant at Sinai described in Exodus 19-23: the singling out of Israel of all the nations to enjoy the intimate protection of God in exchange for adher­ence to the regime of divine commandments and obligations. Of the covenantal transaction, what the rabbis select for emphasis is neither the transcendent awesomeness of the event nor the difficulty of keeping its terms, but its basis in love: love expressed both in the choosing of Israel and in the granting of commandments, understood as opportunities for fulfilling His will.

If the primordial choosing of Israel is the historical event recalled in this prayer, the everyday experience described is the life of the Law, the living with and through the Torah. It is only through God’s continuous love in the present, acknowledges the one who prays, that a Jew succeeds in keeping this discipline, and in keeping it with passionate devotion. God grants enlightenment, understanding, and learning: He is also the source of the will to take the further crucial step, to break through from cog­nition to practice. And through practice to love: God’s love bestows the power to unify man’s heart so that one can “cleave to the command­ments” and offer back to God the love one has received.

With the sounding of the theme of reciprocal love between man and God, the Shema proper is now recited. Why the Shema is lodged here between the second and third berakhot can now be understood. Again, the reason relates to the dual levels of event and process at which the service operates. In the succession of theological moments from creation to revelation to redemption, the Shema belongs to the second because it itself is the content of revelation. It is Torah: biblical text and not rabbinic prayer.

In their interpretation of the revelatory event at Sinai, the rabbis went a step further. They asserted that the assent given by the Israelites at that moment obligated all future generations, inasmuch as we were all present through our progenitors. Though we were pledged by that fate­ful “Yea!” we must nevertheless reconfirm the choice and make it our own. By reciting the Shema with passionate commitment, we make true the rabbinic doctrine: We stand again at Sinai and take upon ourselves the “yoke of the commandments.”

God is imaged as the creator of life and as the endower of life with meaning through the Torah. Now, in the third and final berakhah, God is presented as the protector of the community that keeps faith with the Torah (pp. 79-81). The immediate background is the recapitulation of the Covenant embodied in the second paragraph of the Shema proper. If Israel remains loyal to the oneness of God and to the way of life set down in the Torah, the Covenant stipulates, it will enjoy a special relation­ship to history. A small and vulnerable people, Israel cannot long survive within the power contests of the nations without the active pro­tectorship of God. Whereas the previous berakhot stressed the divine attributes of mercy and love, the present context underscores power and force as the qualities displayed in the exercise of God’s faithfulness to Israel.

The great archetypal instance of divine intervention is the liberation from Egypt, and it is the recollection of that event that is the main subject of the prayer, “From Egypt You redeemed us, O Lord our God, and from the house of bondage you delivered us. Their first-born You slew, and Your first-born You redeemed. You split the Red Sea so that the beloved would pass through and the oppressors would drown; the waters engulfed them and not one was left.” Now the miracle at the sea was only one half of the Exodus event described in the Bible; it is completed by the great song of praise sung by Moses and the Israelites, which begins, “I will sing to the Lord, for He has triumphed gloriously” (Exod. 15). The liturgical evocation of the Exodus is similarly divided. Yet while the miracle at the sea is narrated like an event from the past, the Song at the Sea is not only narrated but, in part, sung as if it were taking place in the present. The worshiping congregation momentarily merges with the ancient chorus, acclaiming together the words of Exodus 15: “Who is like You, O Lord, among the mighty?” and “The Lord shall reign for ever and ever.”

This collapsing of past and present into a timeless moment of accla­mation functions as a bridge to the final section of the prayer, which pushes the idea of timelessness into another dimension. The awareness of past redemption must of necessity coexist with the awareness of pres­ent redemption. The liberation from Egypt in rabbinic thought is a prefiguration of a deliverance to come at the end of history, when the subjugation to the nations will be broken and the exiles gathered into the land through the agency of the Messiah. This is no fantasy, but God’s recorded promise.By recalling the ancient redemption and resinging its hymn of praise, the pray-er reaffirms a belief not only in the future redemption but in the right to implore God to make good His pledge. 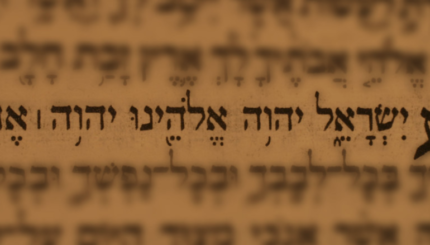 Shema as a Love Story