‘Tis the season of the farmers’ market

Community-supported agriculture (CSA) programs pair up a local farmer with a group of people who pre-pay to receive an entire growing seasons’ worth of that farmers’ vegetables. Once a week during the season, the farmer drives a freshly harvested bounty to a central location (most often a school, church, or community center), where members come to pick it up.

Everybody Wins (and Eats)

CSA farmers benefit enormously from cultivating a stable and committed customer base. And because member payments arrive in the winter and spring before the growing season starts, they receives a stream of income right as they are fixing their tractors and buying seeds — in other words, when they need it most. Members also benefit by the regular influx of local, mostly organically grown vegetables and the opportunity to meet the person who grows their food. Most CSAs also plan day trips to the farm, which only deepens members’ awareness of and connection to their food source.

The CSA model, which first launched in the United States in the early 1980s (though the idea already existed in Europe), rocketed in popularity in the first decade of the 21st century. As the idea took off, farmers have started to move beyond vegetables, partnering with other farms and food purveyors to offer fruit, eggs, flowers, dairy, meat, and even wheat berries which consumers can grind into flour. Spin-off business have also sprouted up in support of the CSA, including home chef services like Sweet Deliverance, which pick up members’ weekly share of produce, cooks it on their behalf, and delivers the local meals right to their door.

In 2004, the Jewish sustainability organization, Hazon, launched the first Jewish CSA program in North America. Initially called Tuv Ha’Aretz and now called Hazon CSA — which translates to either good for the land or best of the land, the program functions like a typical CSA. But in addition to picking up produce each week, members also have the opportunity to participate in educational and social activities during the season that connect the dots between Jewish tradition and agriculture. Despite being known as “the people of the Book,” Jews have maintained a relationship to land throughout the centuries.

The shape and scope of Hazon CSA educational events vary from community to community. During the summer of 2007, for example, a Jewish CSA in Berkeley, California, held a Shabbat retreat at their partner farm during Sukkot. Members ate and slept in a sukkah they built together in the fields, simultaneously celebrating the holiday’s harvest themes, and the specific harvesting happening all around them.

Another Hazon CSA site in Washington DC hosted an evening program called “Meet Your Meat,” which featured speakers talking about the emerging field of humane kosher meat production. “Many of [the people in my community] haven’t thought much about Jews and food beyond bagels, lox, and [saying the] hamotzi (the blessing said over bread),” said Sara Winkelman, who coordinates Tuv Ha’Aretz St. Louis. “I’m excited to make this connection with them.”

In its first five years, Tuv Ha’Aretz grew from one farm and one partnering synagogue in New York City to 32 communities at synagogues, Jewish community centers and Jewish day schools across the country, as well as in Canada and Israel. In 2008, Tuv Ha’Aretz’s 1,700 households (representing thousands of members) contributed more than $560,000 in revenue to local farmers.

Through their involvement in Tuv Ha’Aretz, members have the opportunity to engage with their local community, while linking into a national network of Jewish CSA members and sustainable food enthusiasts.

In many cases, the Tuv Ha’Aretz community’s partnership with their farm has also been transformational–both for members and for the farmer. During the summer of 2008, the members of Tuv Ha’Aretz Chicago began to notice fertilized blood spots in the eggs their farmer brought–a natural occurrence that results when free range hens and roosters are kept in the same area. While blood spots indicate a normal, healthy life for a chicken, they are a kashrut no-no.

When the CSA coordinators mentioned the issue to their farmer, Vicki Westerhoff of Genesis Growers, they assumed nothing could be done. But the next week, Westerhoff arrived with 19 dozen eggs from hens that she had segregated from the rooster. The hens were just as happy, Westerhoff said, and kosher members’ got spot-free eggs. “I never could have walked into a grocery store and asked for this,” said CSA coordinator, Cara Gutstein. But in a very simple conversation with a generous, open-minded farmer, I did — and the story had a happy ending.”

If you’re interested in joining or beginning a Jewish CSA in your community, contact Tuv Ha’aretz. Other CSAs can be located through Local Harvest. 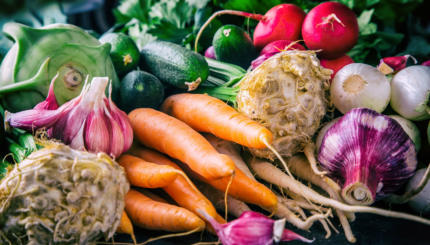 When in doubt, make some latkes. 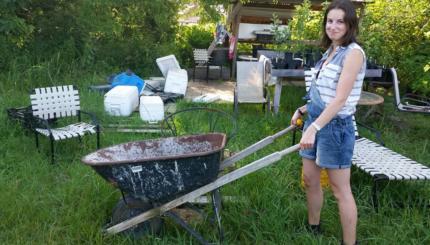