While visitors to some of the larger, more decorative European synagogues–most dating from the 19th century, such as the Spanish-style synagogue in Prague or the Dohany Street synagogue in Budapest–may quibble with the author’s assertion that none is a “masterpiece,” it is true that none rivals Europe’s large cathedrals in size or ornamentation. This passage is reprinted with permission from
To Life!: A Celebration of Jewish Being and Thinking
, published by Little, Brown & Company.

For most of our history, we Jews have been a single people scattered over many geographical locations. Not since biblical times have most Jews been concentrated in the same country. Moreover, changing political fortunes and persistent antisemitism frequently forced us to migrate from a land we had lived in for generations and find ourselves a new home. Though we were always loyal and devoted citizens of the countries we lived in, we learned not to invest too much in the assumption that we would go on living there indefinitely. As a result, even when Jewish communities were. prosperous, our synagogues were comfortable but modest structures.

When you travel through England, France, and Germany, you marvel at the magnificent Christian cathedrals that brought people together to worship. There are no architectural masterpieces among the surviving synagogues of Europe. Instead, we created our cathedrals in time rather than space, in mood rather than stone. Instead of shaping granite, we learned to shape days into forms that would bring people together in reverence. The holiness of time was more portable and more democratically accessible than the holiness of space. When we wanted to feel ourselves in the presence of God, we did it not by going to a special place (even Jerusalem did not play this role in the Middle Ages, when travel was difficult and dangerous), but by giving the day a special shape and flavor. The best example of this is the Sabbath. 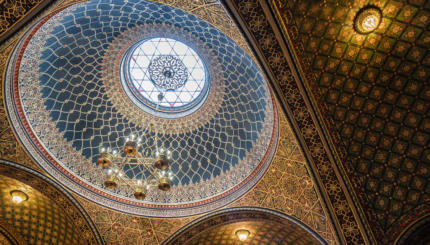 Tips for the novice shul-goer.

Rabbinic restrictions on behavior in the synagogue reveal continuing tension between ordinary Jews' sense of being at home and at ease there, and the desire of rabbis to set it apart as a sacred place.