This week’s Torah portion, Nasso, includes one of Judaism’s most time-honored liturgical texts, the priestly blessing:

“May Adonai bless you and keep you

These three short, beautiful verses, which God commanded Aaron and his sons to use to bless the Jewish people with the gift of God’s presence, indeed God’s face, are deeply ingrained in Jewish cultural memory. They also pose some important questions about the balance between the value of personal participation and the role intermediaries play in religious life.

The verses of the priestly blessing are certainly among the oldest in continuous liturgical use. Archaeological evidence confirms their use even in the biblical period — their words were etched on silver scrolls found in tombs from the seventh century BCE. By the time of the Second Temple, their place in the ritual was confirmed as part of a series of blessings recited after the morning sacrifice (Mishnah Tamid 5:1), and, it is believed by many scholars to be one of the nuclei around which the current liturgical framework of the Amidah [the “standing” prayer] coalesced.

Of course, in the ancient temple, many essential daily and lifecycle rituals required the involvement of an intricate infrastructure of Kohanim (priests) and Levites, but with its destruction, most of these rituals fell into desuetude, leaving ritual far more in the hands of the individual. A huge class of intermediaries was eliminated. Rabbis and cantors took on the role as a substitute system of religious leadership, but in truth, even many of the rituals which are reserved for them by common practice or in deference to civil law are in fact technically valid if performed without benefit of clergy.

Most prayers can be said in private, if need be, and even those rituals requiring a minyan [prayer quorum] require only 10 like-minded Jews and perhaps someone with the requisite skills to lead them, rather than a functionary who is a member of a particular professional group or hereditary caste.

The priestly blessing was an exception, and even today in some synagogues it is still enacted in striking reproduction of the ritual of the ancient temple, if not daily then at least on certain festivals. The Kohanim, who must be free from certain types of mental, physical and spiritual blemishes, remove their shoes, since all temple worship was performed barefoot, and the Levites wash the priests’ hands, in remembrance of the ablutions that were mandated before carrying out any temple ritual. The priests stand facing the congregation, holding their fingers outstretched, and repeat the words of the ancient blessing to the congregation standing before them.

The role and responsibility of those giving the blessing, is clear; however, what is the responsibility of those who would receive the blessing? Must they be present to receive it? What about those who are out in the fields and are not able to make it to synagogue at all? The Talmud (Sotah 38b) presents an unexpected conclusion: those who are behind the priests (even if they are within the precincts of the synagogue) do not receive the benefit of the blessing, while paradoxically, those who are out in the fields, out of earshot, perhaps not even aware that they are being blessed, enjoy its full effect.

It would be an undue hardship for those toiling in the fields to come all the way into town to hear the blessing and then return to their work, and they are regarded as “anisi“–blameless due to forces beyond their control. Even an iron curtain would not separate the path of divine blessing. In contrast, those who are in the city, or indeed, in the synagogue, and do not trouble themselves to come for just a few minutes to participate, do not deserve the benefit of the doubt.

The sages realized the significance of this teaching, applying it to those who could not reach the synagogue for other types of worship as well (Rosh Hashanah 35a), but in fact it has even broader implications in our own day. We live in an era of specialization, in which anything from financial management to cooking to childbirth can be “outsourced.” While there are certainly many times when a professional, an expert, or a helping hand is appropriate and even essential, there is a danger in applying this instinct too broadly in the realm of religious life as well.

The Desire for Surrogacy

Sometimes the desire for surrogacy is relatively innocuous. Often I’m approached by those who ask if I can pray for the recovery of someone who is ill: “Rabbi, can you make a misheberakh [prayer for healing] for so-and-so? I know you have no idea who they are, but I don’t really get to synagogue often, and you know how to do it…” Sometimes, out of sensitivity I’ll take the name and add it without comment. I wish that it were even more often that I could muster the gumption to insist: “Of course I’ll pray for so-and-so. But it would be so much more meaningful if you, as someone who cares so deeply, could be present to pray as well.”

It happens on a more troubling level when institutions or groups offer dispensations to avoid Jewish responsibility or involvement in exchange for financial support. For example, there are any number that offer a “Kaddish” service in exchange for a contribution. A suitably pious surrogate, perhaps even in authentic Jewish costume, will say a memorial prayer daily for your deceased loved one. Perhaps it is effective fundraising, but it sends an unfortunate message that it is appropriate to rely on others to discharge our religious obligations and negates the role that “average” Jews can, and must, play in their own religious lives.

Of course, there is a reason why this approach is so appealing — there are those who have fallen so out of touch with even the most basic Jewish ritual and practice that they feel like their ancestors who toiled in the fields, with blessings totally beyond their grasp, and cannot imagine coming in. Most of us, though, are like the city dwellers, who were obligated to come and be in front of the Priests as they offered their blessing.

We may rely on religious leaders to create ritual experiences for us to embrace, but we cannot live vicariously through those leaders. Despite the urge to let others “be Jewish on our behalf,” we must be physically and spiritually present to experience the full blessing of God’s presence, of God’s face.

Those who link themselves with God and the people of Israel will indeed be blessed. 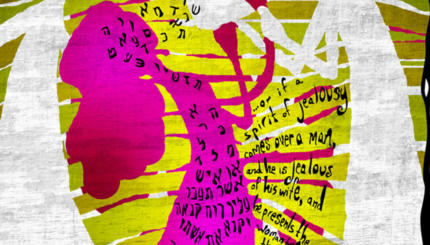 A prayer for yesterday, today and tomorrow — all in one.