The Bible offers few details about its characters’ backgrounds and motivations. That’s where midrash comes in; one of the functions of this genre of rabbinic literature is to flesh out the characters of the Bible.

Often, the sages of the midrash seek to provide a “back story” for a biblical personality. The sages also were compelled to explain the motivations of God and human characters, imagining their inner lives. Midrashim take roughly sketched biblical characters and make of them archetypal figures with whom we can more easily identify.

Some of the most famous midrashim are stories about Abraham and Sarah. Among these midrashim are tales so embedded in Jewish tradition that many people do not even realize they can’t be found in the Torah.

When the Torah introduces Avram (as Abraham was initially named), he is already a grown man. The Torah mentions that he was born to a man named Terah in Ur of the Chaldees, and that Avram left Ur with his father, his brother, and their collective households and traveled to Haran (Genesis 11:27-32). God’s first reported words to Avram come when God commands Avram, at the age of 75, to leave Haran for Canaan (Genesis 12).

What was special about Avram/Abraham? What are the character traits that motivated God to choose this man over all others? Midrashic stories of Avram’s youth provide the answers. They portray Avram as possessing logical gifts and spiritual insight that allow him to see the inconsistencies between the idolatrous practices around him and the theological claims to which they are linked.

According to the Talmud (Baba Batra 91a), Abraham’s birth was predicted by the astrologers of King Nimrod, who perceived the infant as being a threat to Nimrod’s kingship. Terah hides young Avram in a cave to save him from death. Emerging from the cave at the age of three, Avram observes that there is a powerful God above nature, who created nature. It is this God who he worships.

In another set of midrashim (Genesis Rabbah 38, Tanna Debei Eliyahu), we find Abraham in his father’s shop, which sells idols. Abraham demonstrates to his father the absurdity of worshipping the very idols he sculpts.

In the best known of these stories, Abraham stages a “riot” among the idols in which he claims that a large idol smashed others in order to take their grain offerings as his own. Terah, upon returning to the shop, refuses to believe the tale. After all, the idols aren’t alive! Abraham catches his father in this logical flaw: Why worship the lifeless work of your own hands?

In another similar tale, we see another example of Abraham’s use of reason to convince others of the falsehood of idol worship:

In these midrashim, Abraham is an intelligent, rational boy (and, later, man) who is unafraid to challenge authorities regarding the most basic religious claims of his society. Abraham does not believe in God because God spoke to him or proved it. Instead, the midrash shows that Abraham “discovered” God for himself.

These outstanding characteristics made Abraham a leader even before God spoke to him. In Genesis 12:5, we learn that Abraham went to Canaan with “the people [nefesh] they made [asu] in Haran.” “Nefesh” essentially means “soul,” but is also used to refer to human beings (i.e. those possessing souls). However, how could the text be saying that Abraham “made” souls?

Contemporary scholar Everett Fox suggests the translation “people they made-their-own” (The Five Books of Moses)–a sort of adoption. This translation seems to draw on earlier commentators and the midrashim to which they refer. In the opinion of Rashi, the medieval exegete, the plain meaning of the text is that this phrase refers to the servants and household members whom Abraham acquired while in Haran, reading “asu” as “acquire” rather than as “made.”

Rashi also mentions a classical midrash that offers a different perspective. In this story, we see that Abraham had taken upon himself an evangelical mission, preaching about the One God without receiving a command from God to do so:

By the time God calls upon Avram, these conversions had already taken place. These midrashim let us know that God chooses Avram after Avram has already chosen God. Abraham is a revolutionary distinguished not by blind acceptance of God’s command, but by wisdom, insight, and leadership.

The Torah often is especially silent regarding female characters. Rabbinic tradition, however, emphasizes the merit and important work of our female ancestors. Midrashim illuminate the life and works of the Imahot (Matriarchs).

When the Torah first mentions Sarah–or Sarai, as she was initially named–she is among those listed as leaving Ur with Avram and his family. Initially, all that is said is that she is barren. From this bare mention, Sarah emerges in the Talmud and midrashas an equal partner in God’s work and a prophetess in her own right.

The midrash on Genesis 12:5–“…the people they made in Haran…”–includes Sarai in the missionary work that took place. The midrash says:

This midrashic introduction brings to light Sarah’s role in the earliest origins of the Jewish people. The Talmud lists her among the female prophets (Megillah 14a), and Sarah was universally viewed by the sages as a woman of wisdom and righteous action.

Other traditional tales illustrate Sarah’s work in bringing strangers closer to the experience of God. In part, this is done by depicting Sarah’s tent a precursor to the Ohel Moed (Tent of Meeting, home of the Mishkan, which housed the Ark of the Covenant) and Beit Hamikdash (Temple in Jerusalem).

In the midrashic imagination, Sarah’s tent becomes a place in which God’s blessings and imminence can be experienced. Sarah’s death temporarily halts the miracles and good works associated with the tent; Rebecca then reactivates the holiness of the tent with her marriage to Isaac, Sarah’s son.

These characteristics of Sarah’s (and later Rebecca’s) tent are parallel to characteristics of the Tabernacle and Temple. Sarah’s bread is like the shewbread, the light prefigures the Menorah, and the wind resembles the Holy Spirit, ruah hakodesh. In particular, the cloud mentioned in the midrash alludes to the cloud of the Shekhinah, the personified aspect of God that is imminent. The Shekhinah is an aspect of God specifically associated with the Tabernacle and Temple. The book of Exodus ends with the completion of the Mishkanand the Israelites witnessing a cloud descending upon the tent (Exodus 40:34-38). Linguistically, the word Mishkan (literally, a dwelling place) has the same root as Shekhinah, and both of these terms draw on the idea that God can be experienced as close-by, not only as transcendent.

The Shekhinah additionally represents the relationship between the People of Israel with God and God’s favor for individual people or groups. With Solomon’s building of the first Temple in Jerusalem, the Ark was brought to the Temple, which then replaced the Mishkan. Tradition teaches that the Temple and the sacrifices performed there further connected the Shekhinah to the People of Israel in their homeland.

The midrash’s implication, therefore, is that Sarah provided a precedent for this relationship. 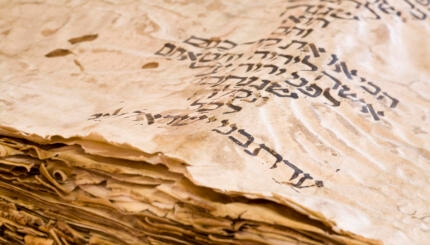 Torah as the Blueprint for the World

A closer look at the famous midrash that opens the collection Genesis Rabbah.