Rosh Hashanah (the Jewish New Year) is simultaneously a time of great celebration and subtle trepidation. We celebrate the completion of one year and the beginning of the next — the reassuring, endless cycle of time.

Rosh Hashanah and the Sixth Day of Creation

There is a view put forth by the rabbis in the Talmud that the day of Rosh Hashanah coincides with the sixth day of creation, when humanity was created. According to this view, Rosh Hashanah becomes the birthday of all peoples, and of course, one celebrates a birthday.

Nonetheless, according to this interpretation, the day on which humanity was created is the same day on which it sinned and was judged. Adam and Eve were formed, given life, ate of the forbidden fruit, called to account for this act, and consequently exiled from the Garden of Eden, all on the same day. These events can be thought of as the model upon which we learn many of the themes and theology for Rosh Hashanah. It is a day to celebrate our creation, but also a day of accounting and judgment for our actions. One of the consequences of Adam and Eve’s sin was the introduction of death or mortality into the world. The stakes are quite high in the original model and they remain equally high in the Jewish world’s approach to the day.

The Book of Life

On Rosh Hashanah, we relate to God as the Ultimate Judge. The Book of Life is opened before the Divine Being and we become advocates for our personal inscription into this book. We review the choices we have made over the past year, our actions and our intentions, as we attempt to honestly evaluate ourselves. Ultimately we hope our names are inscribed in the Book of Life, an image that speaks clearly of securing our destinies in a positive way for the coming year. It is traditional to greet each other with the wish that the person be inscribed in the Book of Life for the coming year. It is significant that God’s decisions are influenced by each person’s actions and intentions.

Repentance is a key theme of Rosh Hashanah. While evaluating the past year, each person engages in avenues of repentant behavior that can affect the Divine decree. True repentance can take several forms, including recognition of error, intent to correct ourselves, and, if possible, acts of repentance to follow. These actions allow us to participate in and influence our own destinies.

With the model of Adam and Eve before us, we remember that the consequences of eating the forbidden fruit included exile from the Garden of Eden, toiling the earth for food, and the labor of bearing and raising children. Likewise, the destinies that God decrees for the coming year may include changes in livelihood, fertility, and family harmony. For example, whether or not we prosper financially in the coming year is included in the Divine decrees. This scenario may seem to raise questions of predetermination, i.e., if all is decided on Rosh Hashanah, then what difference do our actions make? However, the element of partnering in our destiny comes to the fore with the intention and action of repentance. The idea is not to simply live out the Divine decree, but to mitigate and ultimately change it in our favor.

The Head of the Year

Another theme of Rosh Hashanah comes from a literal translation of the term. Rosh in Hebrew means “head.” It is the head of the year and bears with it all the connotations that the head or mind has in human thought. In this way we wish for excellence in the coming year and not simply survival. In some Sephardic communities, it is traditional to eat foods that convey this image, such as cooking with the heads of the fish while avoiding the tails.

Other traditional food customs likewise convey several themes of the holiday. It is customary to partake of a new food item, usually a new fruit, on Rosh Hashanah. This invokes the image of newness and a fresh beginning, which is embodied in the holiday. Also, Jews traditionally dip apples into honey on Rosh Hashanah. The apple, reminiscent of the fruit of the Garden of Eden, reminds us of the creation theme that infuses Rosh Hashanah. The honey, an ancient symbol of strength and a source of sweetness, embodies our wishes for the coming year. Honey is also the sweet product of the collective within the beehive and therefore can be seen as symbolic of the potential sweetness and strength found within community. Thus, dipping the singular piece of apple into the honey bowl can be symbolic of ourselves as individuals immersed within the community and all the positive aspects it contains.

Together, these themes speak of renewal, celebration, creation, evaluation, accountability, and responsibility: a complex holiday filled with joy and trepidation. 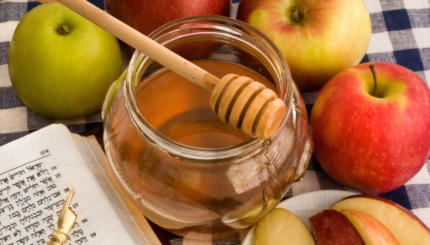 On Rosh Hashanah It Is Inscribed

Rosh Hashanah is called Yom Ha-Din, the day we stand in judgment before God.