In Jewish tradition, childbirth, leprosy, bodily discharges, and assorted unseemly substances threaten an individual’s purity and, consequently, his or her holiness. The verses within Tazria and Metzora detail ways to handle these impurities. Elaborate procedures ritualize the transformation from someone who is “tameh” (impure) to someone who is “tahor” (pure). Opening up to the very beginning of Parshat Metzora, let’s look at some of the ingredients and rituals involved in one of the purification processes. Perhaps some of these odd ingredients can provide insight into the crimes that cause someone to be punished with leprosy in the first place.

1. This shall be the ritual for a leper at the time that he is to be cleansed. When it has been reported to the priest,

2. The priest shall go outside the camp. If the priest sees that the leper has been healed of his scaly affliction,

3. The priest shall order two live clean birds, cedar wood, crimson stuff, and hyssop to be brought for him who is to be cleansed.

4. The priest shall order one of the birds slaughtered over fresh water in an earthen vessel;

5.  And he shall take the live bird, along with the cedar wood, the crimson stuff, and the hyssop, and dip them together with the live bird in the blood of the bird that was slaughtered over the fresh water.

6. He shall then sprinkle it seven times on him who is to be cleansed of the eruption and cleanse him; and he shall set the live bird free in the open country.

7. The one to be cleansed shall wash his clothes, shave off all his hair, and bathe in water; then he shall be clean. After that he may enter the camp, but he must remain outside his tent seven days.

8. On the seventh day he shall shave off all of his hair — of head, beard, and eyebrows. When he has shaved off all his hair, he shall wash his clothes and bathe his body in water; then he shall be clean. [The procedure concludes with the priest offering two male lambs as a sacrifice.]

1. Where is the “metzora” (the leper) while he undergoes the “scaly affliction”?

2. Name all of the ingredients in the priest’s healing concoction. Which components strike you as particularly unusual?

3. What could be the significance of including both the wood of cedar — a tall tree, and hyssop – -an herb that grows close to the ground?

4. Once the live bird has been set free, how does the “metzora” change his own location?

5. What final step ensures that the “metzora” is clean?

Rashi (a medieval French commentator) is highly helpful when trying to tackle the question of why certain ingredients would have been included in the purification rite of the leper. A close look at the ingredients named in verse 4 will show how the text views the nature of leprosy. In the case of this disease, there is a direct correlation between certain behaviors before the onset of leprosy and the remedies to cleanse the individual afterwards.

First, we will address the matter of the “two live clean birds.” Rashi says, “Since afflictions come about because of malicious talk, which is an act of verbal twittering, therefore, there was required for [the sufferer’s] purification, birds that constantly twitter with chirping of sound.” Rashi here invokes the crime of “lashon hara” or malicious speech.

According to the Jerusalem Talmud, Peah 4a-b, the crime of “lashon hara” is the equivalent of idolatry, licentiousness, and murder COMBINED. Soiling someone else’s reputation by spreading such speech is a high crime; the punishment of leprosy fits this crime by spreading sores over the body of the gossiper. Just as gossip infects and taints the lives of its subjects, so does leprosy infect and taint the gossiper. Thus the purification rite must include twittering birds to symbolize the leper’s missteps.

Next: the matter of the cedar wood. Rashi explains this ingredient by saying, “Because afflictions come because of haughtiness.” As such, including such a high, lovely tree in the mixture will remind the leper that he thought highly of himself before he was punished with his disease.

In this context, cedars become associated with arrogance. This goes against the grain of the typically positive cedar imagery in Jewish tradition. Psalm 92:13, for example, declares, “The righteous bloom like a date-palm; they thrive like a cedar in Lebanon.” In the Song of Songs, the lover is described with the breathless words, “He is majestic as Lebanon, Stately as the cedars” (5:15). In Genesis Rabbah 15, Rabbi Samuel bar Nahman names cedars as among the seven best “sturdy trees” to be found.

Ironically, Rashi plays on these valences to show exactly how an individual should NOT conduct himself. Beyond serving as a reminder of haughtiness, the cedar’s presence could also be interpreted as showing the leper the heights he might aspire to regain once he is cleansed of his impurities.

The final two components, crimson stuff and hyssop, can be interpreted together as symbols of ultimate lowliness. Rashi says, “What is his remedy, that he should be cured? He should lower himself from his arrogance like a worm and like hyssop.” How does Rashi get from “crimson stuff” to a worm? Pouncing on the double meaning of “tola’at,” which means dyed wool, Rashi reminds us that “tola’at” can also mean “worm.” Thus, the crimson piece of wool stands for the humble worm, perhaps the creature most opposite to the noble cedar. Hyssop, too, is a low plant that grows close to the ground.

Do these ingredients really comprise the remedy to purify and cure a leper, transforming him from “tameh” to “tahor?” If anything, Rashi says, these items — twittering birds, cedar wood, crimson wool, and hyssop — will remind the leper of the behaviors that got him in trouble in the first place.

These ingredients also point to the way to “come clean.” Once this person resolves to stop telling tales, the sores that spread the tale of the sinner’s disease will truly disappear. Only by eliminating his own haughtiness can the individual stand as tall as a cedar. Only by remaining as grounded as a worm or a plant can the individual become fit to re-enter the camp.

In the bigger picture of what this seemingly bizarre ritual means: It takes more than shaving one’s hair and bathing several times for a former leper to re-enter the camp and, consequently, Israelite society. The external cleansing must be accompanied by an internal cleansing; the physical healing can only occur in tandem with a spiritual accounting. As the purification ritual requires the priest to release one of the live birds back to freedom in the great outdoors, the leper can simultaneously move from the very same outdoors back into the camp, where elaborate codes of purity and behavior rule the roost. 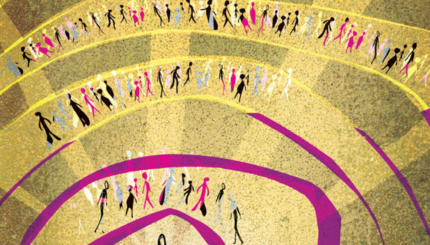 How to create a society that recognizes and meets the needs of ill and marginalized people.

Rabbinic interpreters regarded leprosy as punishment for the sin of careless speech.