The special home ceremony on the night of Passover, the seder (which literally means “order”), is based on the biblical injunction to parents to inform their children of the deliverance, or Exodus, of the Israelite slaves from Egypt. “And you shall tell your son in that day, saying: It is because of that which God did for me when I came forth out of Egypt” (Exodus 13:8).

According to the scholar Abraham Bloch, the first step leading to the creation of the home Passover seder service was taken during the period of the great Temples in Jerusalem, when the Jews who had slaughtered the paschal (Passover) offerings joined the Levites in the chanting of the Hallel (psalms of praise).

The second significant step in the de­velopment of the home ritual of the seder was the pro­vision for the Hallel to be chanted not only at the slaughtering of the offering, but also at the family feasts when the paschal lamb was eaten (Talmud Pesachim 95a). The paschal lamb was eaten in private homes throughout the city of Jerusalem, and the chanting of the Hallel was likely a forerunner of the seder service. (Today, the Hallel prayer remains a part of the seder service.) It is conjectured that the head of the household informally told the story of the Exodus in keeping with the biblical injunction that one should tell his children about the Exodus.

Beginning with the period of the Tannaim (teachers living in the first two centuries of the Common Era), we begin to find Talmudic references to various phases of the seder ceremony as we know it today. Thus, for example, Rabbi Eliezer ben Tzadok discusses haroset, the nut and fruit mixture we eat at the seder (Talmud Pesachim 114a), and Rabbi Joshua ben Haninah discusses the sequence of the kiddush (blessing over the wine) and Havdalah (ceremony bidding fare­well to the Sabbath) on a festival night following the Sabbath (Talmud Pesachim 103a).

From page 116a of the Talmudic tractate of Pesachim, it is clear that consider­able portions of the seder service were already adopted prior to the destruction of the Temple in the year 70 CE:

The development of the seder in the first century was guided by the specific function of the celebration — the reenactment of the historic events of the 14th of the month of Nisan, the night the Exodus took place. This led to the introduction of herbs, which were dipped in vinegar, or possibly red wine, and then eaten. The Talmud (Pesachim l14b) at a later period explained this practice as an incentive to children to be curious about the procedure and ask questions. Some trace the origin of the custom to the reenactment of the biblical account of the dipping of the hyssop in the blood of the Passover lamb and the smearing of the blood on the doorposts of Jewish homes. The haroset, reminder of the mortar (Talmud Pesachim l16a), also fitted in with the broad objective of the early version of the seder meal.

The four questions asked by the child during the course of the seder meal have been changed over the centuries. The earliest version of these questions was preserved by the Jerusalem Talmud (Chapter 10 of Pesachim). This text contains only three questions, the first one begin­ning with the Hebrew phrase “mah nishtanah” — why is it different? — which is used in our day as well.

The Seder in the Post-Temple Era

The destruction of the Temple in Jerusalem by the Romans in 70 CE brought an end to the pilgrimages to Jerusalem. This made for the discontinuance of the paschal lamb, and the chanting of the Hallel at home was no longer required. The ritual of the bitter herbs, which was linked to the eating of the paschal lamb, was also likely eliminated. There was even serious doubt whether the biblical obligation to eat unleavened bread survived the destruction of the Temple.

All that definitely remained was the negative injunction to refrain from eating hametz (leavened bread and food). The duty to reevaluate the seder now fell upon Rabban Gamliel II, the first head of the academy after the destruction of the Temple. The first basic statement of the reevaluation of the Passover ceremony was given in the famous dictum of Rabban Gamliel, “He who does not stress these rituals on Passover does not fulfill his obligations: the paschal lamb, matzah, and maror [bitter herb]” (Talmud Pesachim l16a).

The commemoration of the paschal lamb (called the “pesach“) was to be stressed as a lesson pointing to the fact that God had passed over (“pasach“) the homes of the Israelites in Egypt during the slaying of the first-born Egyptian children. With this addition, the pageantry of the seder was no longer confined to only a reenactment of the events of the 14th of Nisan. The plague of the death of the firstborn took place after the historic feast of the paschal lamb, and now the doors were opened for the recitation on the Seder night of wondrous events occurring both prior and subsequent to the departure of the Israelites from Egypt.

Regarding the unleavened bread, Rabban Gamliel’s dictum associated the symbolism of matzah with redemption rather than affliction. This added a note of hopefulness to the Passover meal. The symbolism of the maror, the bitter herbs, remained the same as in previous centuries, representing the tears of the Israelites in Egyptian slavery.

The recitation of Rabban Gamliel’s new interpretation was made obligatory for all Jewry, thus assuring widespread compliance. The answer of the father to the child’s questions, once spontaneous, was now part of a prescribed formula. According to most scholars, the content of the pre-meal portion of the Haggadah was well established by the first third of the second century. But its final form and sequence was not yet entirely determined, as can be attested to by the fact that debates loomed in the Talmud (tractate Pesachim) regarding various texts to be included in the Haggadah.

Rabban Gamliel’s reinterpretation of the seder led to the practice of reclining at the seder table (Talmud Pesachim 99b), a sign of freedom because slaves ate their meal in a standing position.

The obligation to drink four cups of wine on the seder night was another rabbinic provision introduced within several decades after the destruction of the temple (Talmud Pesachim 109b). The most quoted reason for the four cups of wine is that they symbolize the fourfold divine promise of liberation contained in Exodus 6:6-7 (“I will free you from the burdens of the Egyptians, I will deliver you from their bondage, I will redeem you, I will take you as my people”). The wine was intended to add joy and gaiety to the seder meal, and the drinking of the cups was spaced properly to produce joy but to prevent intoxication. To each cup was assigned a special place in the seder ritual: the first two cups when the story of slavery is recited, and the last two cups when the glory of freedom is related (Talmud Pesachim 108a).

Another high point of the Passover seder is the section of the four sons. The narrative of the four sons is based on the Bible speaking four times of “your sons” inquiring about the meaning of Passover and each time poses his question in different terms. Once (Deuteronomy 6:20), he is represented as asking, “What means these testimonies and statutes and judgments that the Lord our God has commanded us?” Another time (Exodus 12:26), he demands brusquely, “What means this service of yours?” A third time (Exodus 13:14), he asks simply, “What is this?” And a fourth time (Exodus 13:8), the question is not even framed but merely implied. This variation, said the sages, is purposeful. In each case, the form of the question typifies the character and attitude of the inquirer, who is respectively wise, wicked, simple, and too young to ask. Each must be answered differently, in appropriate fashion.

Properly understood, the seder ceremony is no mere act of pious recollection, but a unique device for blending the past, present, and future into a single comprehensive and transcendental experience. The actors in the story are not merely the particular Israelites who happen to have been led out of bondage by Moses, but all the generations of Israel throughout all time.

In an ideal sense, all Israel went forth out of Egypt and all Israel stood before Sinai. The conception of the seder meal as an experience rather than simply a recitation of text runs like a silver thread through the whole of Jewish tradition and finds expression on every page of the Haggadah. “Every person in every generation,” says a familiar passage in the Haggadah, “must look upon himself as if he personally had come forth out of Egypt.” The deliverance by Egypt paved the way for Mount Sinai and Israel’s acceptance of its divine mission. The seder narrative relates the whole story of how the Israelites move progressively from darkness to light.

Excerpted with permission from Every Person’s Guide to Passover (Jason Aronson, Inc). 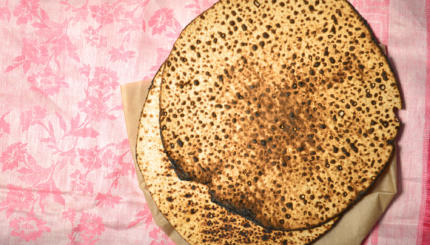 How Passover Customs Have Changed and Developed Over Time

A look at some Pesach customs throughout history.