Believing that there is something special about becoming a bar/bat mitzvah — something bigger than the party afterward — many religious schools and Jewish day schools encourage bar/bat mitzvah students to take on socially responsible community projects, such as collecting clothing or canned foods, giving money to charities, or planting trees in Israel.

When Michael Vidmar of Gaithersburg, Maryland, became a bar mitzvah in 1993, he decided to give the money he received as gifts to the B’nai B’rith flood relief fund. “I was sick about the materialistic greed surrounding my bar mitzvah, and I was ashamed of it,” he said. “I didn’t think I deserved the amounts of money I was receiving, and I felt it was taking away from the religious experience.” Michael did know that he wanted to help other people, and that is why he decided to donate his money to the relief fund.

When Alison Stieglitz became a bat mitzvah, instead of expensive flower arrangements, she placed baskets filled with food in the center of each table at her party. These baskets would then be donated to the local United Way. “I thought that becoming a bat mitzvah was part of taking on adult responsibilities,” Alison says. “Since my bat mitzvah was around the time of Thanksgiving and I was receiving a lot of gifts, I wanted to give something back to the community. I wanted to contribute.”

Ilana Gildenblatt, from Cincinnati, Ohio, raised money for Cincinnati Dreams Come True (a program similar to the Make-a-Wish Foundation) by organizing a three-mile “mitzvathon.” Inviting family and friends to participate, she helped raise $1,500.

Alexandra Alper,  from Rockville, Maryland, collected close to 900 toiletries from neighbors, dentists, beauty salons, supermarkets, and hotels. All were donated to a women’s shelter in Washington, D.C.

Rabbi Jeffrey K. Salkin, author of the book, Putting God on the Guest List: How to Reclaim the Spiritual Meaning of Your Child’s Bar or Bat Mitzvah, recommends that in the planning stage, parents ask, “What Jewish values do we hope this bar or bat mitzvah celebration will embody?” and make a list of them. The list may include compassion, dignity, justice, learning, social action, generosity, humility, moderation, and a love for Jewish people and the Jewish homeland. You might want to have your child make a list as well and compare them. It is a great conversation starter with your child to get onto the same page about the values you hope the bar or bat mitzvah experience will embody.

Plan your celebration around these values, and stick to them. “Jewish celebrations [should] celebrate Jewish values,” Salkin emphasizes. “The educational and spiritual part of bar and bat mitzvah can extend beyond the final hymn at the service. It can permeate the lives of our young, and it can enrich what they take with them into the world.”

This is what happened for Alison Stieglitz, who says her bat mitzvah experience helped to guide her into a career as a social worker. “I learned how easy it is to make a difference,” she stated. “It’s important to try and make things better.”

Excerpted with permission from Jewish Family and Life: Traditions, Holidays, and Values for Today’s Parents and Children. 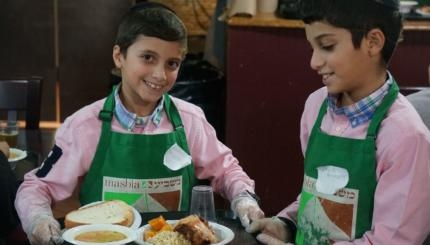 How to Choose a Mitzvah Project for a Bar/Bat Mitzvah

Suggestions for adding social action to this rite of passage.

How the Bar/Bat Mitzvah Child Participates in the Service

The defining moment of the ceremony is the child's first aliyah, but children may also play additional roles in the service.