This week’s Torah portion, Shoftim, contains a series of laws directing the nascent Israelite community on how to establish a just society. The issues it covers include many that we still struggle with in our society today: setting up a fair and impartial legal system, making distinctions between murder and manslaughter, establishing the level of testimony necessary to convict someone in a capital crime, laying forth the principles for conducting a just war. These varied concepts, however, are all tied together through one guiding principle found at the beginning of the portion:

Who is the commandment “justice, justice, shall you pursue” directed at – -the judges or the people?

What is the significance of using the verb “pursue” in this commandment? What else, either from our text or our own lives, do we pursue?

Few passages in Torah include the “reward” for fulfilling the commandment. How does having this information affect your understanding of the passage?

Biblical commentators also discuss the meaning of the doubling of the word tzedek, justice, in verse 20. Rashi explains that this means one should seek to have one’s case tried before the best court available. Nahmanides takes this idea, but applies it to the judges themselves, who should make sure to be just in their rulings, but also pursue justice by seeking out the advice of sages greater than themselves. The Talmud includes this provocative interpretation:

As it has been taught: Justice, justice you shall pursue. The first [mention of justice] refers to a decision based on strict law; the second, to a compromise. How so? Where two boats sailing on a river meet, if both attempt to pass simultaneously, both will sink. However, if one makes way for the other, both can pass [without mishap]. Likewise, if two camels met each other while on the ascent to Beth-Horon [a high mountain with a narrow path]; if they both ascend [at the same time] both may tumble down [into the valley]; but if [they ascend] after each other, both can go up [safely]. How then should they act? If one is laden and the other unladen, the latter should give way to the former. If one is nearer [to its destination] than the other, the former should give way to the latter. If both are [equally] near or far [from their destination,] make a compromise between them, with the one [which is to go forward] compensating the other [which has to give way].

How does this sugya (passage) understand the meaning of the word “justice?” What implications does this interpretation have for how it is pursued?

What are some other ways to interpret the meaning of “justice” and how does that change how one should pursue it?

In the example of the camel, the passage suggests that the unladen camel should give way to the laden one. How can we understand this metaphor in our own terms? What modern issues might it apply to?

In the movie A Beautiful Mind, Dr. John Nash is portrayed as coming up with a “truly original idea” in which he suggests that the best result is not one in which everyone pursues his or her own selfish best interest, but where one pursues one’s self-interest within the context of the entire group’s best interest. Thus, he suggests that one should be willing to make minor individual sacrifices for the good of the group. Our passage makes the same point, recognizing that true justice is reached when all members of the group’s needs are taken into consideration, not only our individual needs. Consider the implications for your own life of using this understanding of justice.

The instructions to pursue justice and practice communal responsibility should motivate us to constantly improve our efforts to alleviate the crises that affect our people. 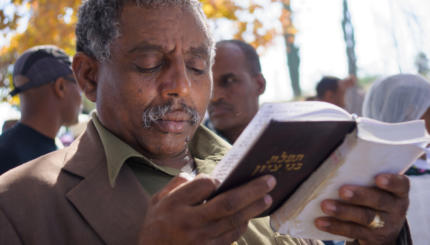 People's perceptions of a society are often based on that society's judicial system.