Today’s daf deals with the procedure for cooking the paschal lamb. The Torah requires that the lamb must be roasted “over fire” (Exodus 12:9) and cooked by no other method. Accordingly, the rabbis note:

And the Merciful One states that (the paschal lamb must be) roasted in fire and not roasted through something else.

Large ovens were constructed for this purpose. The animal was spitted and lowered in to be cooked over the fire.

But what kind of spit should be used? The rabbis prohibited the use of a metal spit. Why? Metal is a conductor of heat: if part of it is hot, all of it is hot. If one uses a metal spit, technically the inside part of the animal will be cooked by the hot metal rod and not the fire itself, and thus violate God’s command.

And that is exactly what the rabbis suggest — using a wooden spit so the meat doesn’t cook from within. Specifically, pomegranate wood.

Various types of wood are discussed on today’s page but most are ruled out because they emit water which would then steam the animal from the inside, again precluding all the flesh from cooking by means of the flames. Palm wood has grooves between the leaves which give off water; fig wood is hollow and gives off water; oak, carob and sycamore are hard, but they have knots which must be cut to straighten the branch — and anyway, those give off water too.

Pomegranate, however, though it has knots, has smooth knots that do not need to be straightened with a knife. You may even use a pomegranate branch that is less than a year old which doesn’t yet have knots. And, crucially, it doesn’t emit steam, so it won’t cook the meat from within.

A wise sage brings up the point that with all wood, the place where the branch is cut from the tree will emit water, even in the case of pomegranate wood. So the rabbis specify that this section should not be inserted in the animal, rather left outside so it doesn’t steam the inside of the animal.

Just when it seems everything is settled, Rabbi Yehuda wonders aloud if metal might actually be used after all. Maybe one shouldn’t be worried about the spit of metal becoming hot and cooking the roast from inside because, he says, since it is inside the animal and not exposed directly to the fire maybe it will not get hot enough to cook it from within.

Ok, so maybe Rabbi Yehuda missed the lesson on thermal conductivity in physics class. Fortunately, his colleagues quickly correct him: even the metal inside the roast that is not directly exposed to fire will still conduct the heat from the part that is directly exposed. They remind him: if one part of it is hot, all of it is hot. And pomegranate wood is the way to go.

So, next time you look to roast a hot dog or marshmallows over the campfire, remember the wisdom of the sages and choose your implements wisely!

Read all of Pesachim 74 on Sefaria.

This piece originally appeared in a My Jewish Learning Daf Yomi email newsletter sent on February 3rd 2021. If you are interested in receiving the newsletter, sign up here. 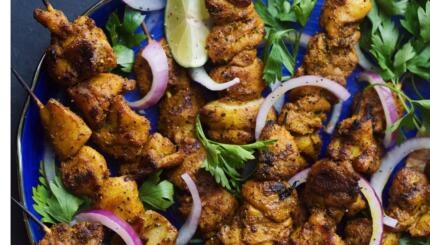 This recipe is perfectly spiced, quick to make and oh-so-juicy. 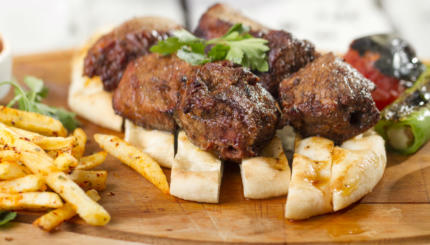 Get yourself a portable grill and have a party.