In 1862, the Jewish Messenger published an account by J. A. Joel of the 23rd Ohio Volunteer Regiment of a seder celebrated by Union soldiers in Fayette, West Virginia. Joel and 20 other Jewish soldiers were granted leave to observe Passover. A soldier home on leave in Cincinnati shipped matzah and Haggadahs to his colleagues. Joel wrote:

We . . . sen[t] parties to forage in the country [for Passover food] while a party stayed to build a log hut for the services. . . We obtained two kegs of cider, a lamb, several chickens and some eggs. Horseradish or parsley we could not obtain, but in lieu we found a weed whose bitterness, I apprehend, exceeded anything our forefathers enjoyed.

We had the lamb, but did not know what part was to represent it at the table; but Yankee ingenuity prevailed, and it was decided to cook the whole and put it on the table, then we could dine off it, and be sure we got the right part.

The necessaries for the choroutzes [haroset] we could not obtain, so we got a brick which, rather hard to digest, reminded us, by looking at it, for what purpose it was intended.

Yankee ingenuity indeed! Historian Bertram Korn observes, “It must have been quite a sight: these twenty men gathered together in a crude and hastily-built log hut, their weapons at their side, prepared as in Egypt-land for all manner of danger, singing the words of praise and faith in the ancient language of Israel.” The seder proceeded smoothly until the eating of the bitter herbs. Joel recounted:

We all had a large portion of the herb ready to eat at the moment I said the blessing; each [ate] his portion, when horrors! What a scene ensued . . . The herb was very bitter and very fiery like Cayenne pepper, and excited our thirst to such a degree that we forgot the law authorizing us to drink only four cups, and . . . we drank up all the cider. Those that drank more freely became excited and one thought he was Moses, another Aaron, and one had the audacity to call himself a Pharaoh. The consequence was a skirmish, with nobody hurt, only Moses, Aaron and Pharaoh had to be carried to the camp, and there left in the arms of Morpheus.

More problematic was the situation of Union soldiers who, unable to form their own seders, were forced to “fraternize” with local Jews. Myer Levy of Philadelphia, for example, was in a Virginia town one Passover late in the war when he saw a young boy sitting on his front steps eating a piece of matzah. According to Korn, when Levy “asked the boy for a piece, the child fled indoors, shouting at the top of his lungs, Mother, there’s a damn Yankee Jew outside!” The boy’s mother invited Levy to seder that night. One wonders how the Virginian family and the Yankee soldier each interpreted the haggadah portions describing the evils of bondage.

On the eve of the fifth day of Passover (April 14), 1865, Abraham Lincoln was shot, and he died of his wounds in the early morning of April 15, which had already been scheduled as a national day of prayer to mark the end of the Civil War. Jews across the land were gathering in synagogues to give thanks. When news of Lincoln’s death arrived, Korn notes, the synagogue altars were quickly draped in black, and, instead of Passover melodies, the congregations chanted Yom Kippur hymns. Rabbis set aside their sermons and wept openly at their pulpits, as did their congregants. Lincoln had been protective of American Jewry, overturning General Grant’s infamous General Order #11 expelling Jews from the Department of Tennessee and supporting legislation allowing Jewish chaplains to serve in the military. The Jewish Record drew the analogy between Lincoln not having lived to see the reconciliation of North and South and Moses dying on Mount Pisgah before he saw the Israelites enter the Promised Land.

It is easy to forget how difficult it can be for Jewish soldiers to serve their country while maintaining the traditions that beautify Judaism. Northern soldiers saw clear parallels between the Union freeing the South’s slaves and Moses leading the ancient Hebrews out of Egypt. Nevertheless, for Jewish Union soldiers fighting between 1861 and 1865 to free others from slavery, the Passover parallels must have made each seder particularly sweet and meaningful. 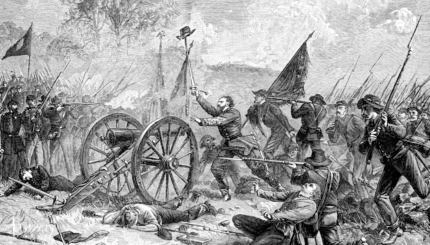