Passover–Pesach in Hebrew– is usually marked as a family celebration of Jewish freedom. Although the central ritual of this festival is the home seder, there are a number of rituals that are observed within the wider community.

In the six weeks preceding Passover, there are a number of special Sabbaths, during which additional or special biblical readings are included in the service. The readings and special days relate to purification rites (Shabbat Parah), the month of Nisan in which Passover falls (Shabbat Ha-Chodesh), or a time to request instruction on the observances of the upcoming festival (Shabbat HaGadol).

Finally, the day just before Passover is one of the minor fast days of the year. Called the Fast of the Firstborn, it is for firstborn males to commemorate the fact that no Jewish firstborn males were killed when the Angel of Death visited the homes of the Egyptians.

One of the ethical components of Passover is called Ma’ot Chittim, literally “money for wheat.” It is a tax imposed on the congregation in the period leading up to Passover to raise money so that the poor can buy wheat to bake matzah and buy other special foods required for the festival. Even though most congregations would not formally impose such a tax, it is very common in Jewish communities throughout the world to carry on with this custom by raising money or sending out Passover food baskets for the poor.

The first and last days of Passover are full festival days, when traditional Jews do not work. Traditional Jews outside of Israel observe the first two and last two days as full festivals, while in Israel and among liberal Jews worldwide, it is just one day at each end of the festival.

The synagogue services of Passover begin with the evening service prior to the seder. A unique feature at this festival service is the omission of the Kiddush (blessing over the wine). On Passover it is assumed that even the poorest will have wine or be invited to a home where Kiddush will be recited at the seder.

The morning service of Passover is distinguished by the reading of the excerpt from Exodus chapter 12 that discusses the Passover celebration. The traditional haftarah (prophetic) reading is from Joshua chapters 5 and 6, which contains the first mention of the Passover festival in the prophets. The Reform haftarah reading is from Isaiah 43 wherein the prophet reminds the people of God’s protection throughout history and cites the salvation at the sea as the primary example. Hallel is recited as part of the service. On the last days of Passover only a shortened version of Hallel is recited. One of the special additions to the first-day Passover service is the prayer for dew, “Tefillat Tal.” This parallels the prayer for rain recited during the Fall holiday of Shemini Atzeret.

On the Sabbath that falls during Passover, the special reading is Shir ha-Shirim (Song of Songs), one of the megillot or five scrolls. The Torah reading contains parts of either Exodus 13, 14, or 15, depending on the particular synagogue’s tradition. It is the story of the crossing of the Red (Reed) Sea. The haftarah is from Second Samuel 22, another prayer of deliverance. This time David is saved from the hand of Saul. The last day of Passover is one of the four times of the year we recite Yizkor, the memorial service for the dead.

The Counting of the Omer (“Sefirat HaOmer”) commences on the second night of the holiday. Omer was the measure of barley brought to the Temple on the second day of Passover as an offering for the beginning of the harvest. The days will then be counted publicly for seven weeks (a week of weeks), which culminates on the 50th day with Shavuot.

The intermediate days of Passover, called “Hol HaMoed,“ are semi-holidays, on which Jews are permitted to work. Traditionally, the Torah is read in the synagogue every morning of Passover. The haftarah for the intermediate days is from Ezekiel 37, which contains the vision of the dry bones being resurrected by God.

Passover is truly one of the richest and most profound of Jewish festivals, combining historical and agricultural symbols, practices, and rituals, which together constitute a holiday that is a treasure box revealing layers upon layers of significance. 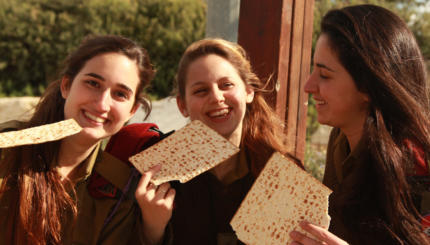 Although they are not full festivals, they are still holy relative to ordinary days.