Many years after his marriages to Rachel and Leah, Jacob received word from God that it was time to return home. Jacob sent messengers ahead to meet his brother Esau. “Tell him that his servant Jacob has been with Laban until now. Tell him that I have acquired herds and flocks and servants. Tell him I seek favor in his eyes.”

The messengers soon returned. “Your brother is coming to meet you, but there are 400 men with him.”

Jacob was very much afraid of his brother (because Jacob had deceived their father into giving him the special first-born blessing that was meant for Esau). So Jacob divided his camp saying, “If Esau strikes down one camp, the other will escape.”

Thereupon Jacob said, “O God of my father Abraham and God of my father Isaac, God who says to me to return to my country and that the Almighty will do good to me. Deliver me, I pray, from the hand of my brother, for I fear he shall kill me and my family, even though you promised to make my descendants like sand in the sea.”

That night Jacob set aside gifts for Esau from his herds and property. He instructed his servants to go one by one, with space in between, to present Esau with these gifts.

While the servants were bringing Jacob’s gifts to Esau, Jacob moved his wife and children to yet another camp. Jacob was left alone in camp and someone wrestled with him until the break of day. When the one that wrestled with Jacob saw that it was impossible to win, that one touched the upper joint of Jacob’s thigh and it was dislocated.

Then the one that was fighting against Jacob said, “Let me go for day is breaking.”

But Jacob responded, “I will not let you go unless you bless me.”

“What is your name?” asked the wrestler.

“Then your name shall no longer be Jacob but Israel, for in prevailing in this fight you have become the commanding power before God and men.”

The one that wrestled Jacob would not give a name, but did bless Jacob. Jacob then named the place Peniel: “For I have seen the Divine face to face and my character has remained intact.” Then Jacob limped away.

Jacob lifted up his eyes and looked and lo! Esau was coming with 400 men. Jacob immediately lined up his families: the maidservants and their children, followed by Leah and their children, and then Rachel and Joseph at the end. Then Jacob went ahead of them and bowed to the ground seven times until he came close to his brother. Esau ran to meet him and embraced him, fell upon his neck and kissed him, and they wept.

After Jacob’s families introduced themselves with bows, Esau turned to Jacob. “I received your gifts, but I have plenty. Keep them.”

“But they were a tribute to you from my hand. I have looked up to your face as judge, and you have accepted me with kindness. Please take my blessing, which was brought to you because God has favored me with it and then, I have everything.”

Esau took it, then offered to escort Jacob to his city where he lived.

Jacob chose instead to follow the natural pace of his travel. Jacob next journeyed to Sukkoth and built booths for his property. He then went to a nearby city and bought some land from the sons of Hamor so he could build an altar. Upon the memorial, Jacob proclaimed, “God is the God of Israel.”

The Rape of Dinah

Dinah, the daughter of Leah and Jacob, went to explore the area.

Shekhem, the son of Hamor the Hivvite, the prince in the land, saw Dinah, took her and raped her. But his soul clung to Dinah and he loved the girl and he asked his father to get her for him as a wife. Jacob and all the men heard that Dinah had been defiled and their hearts were filled with sorrow and anger.

Soon, the father of Shekhem approached Jacob and asked for permission for Dinah to marry his son. He offered a large dowry.

Shimon and Levi Lead a Massacre

The sons of Jacob spoke for their father, “We cannot do this thing, to give our sister to a man who has foreskin, for that is a disgrace to us. However, if you want to circumcise your men, then we will become one people. But if you choose not to circumcise, we will take Dinah and go.”

Now, the son and the father and the rest of the men became circumcised. On the third day when the males were in pain, the two brothers of Dinah, Shimon and Levi, came and killed all the males of that city, including the man who raped their sister. Then they took the property of the people and took all the women and children captive.

But Jacob said to Shimon and Levi, “You have brought me trouble. You discredit me among the people who live in Canaan. They will gather together and strike against us.”

Later, God said to Jacob, “Go to Beth-el and live there and make an altar to God.”

Therein, Jacob had all the captives purify themselves, change their clothes and bring him their foreign gods. Jacob buried these gods under the oak tree in the city of the rape.

Jacob’s people then went to Beth-el, where he wrestled that night. God appeared to Jacob and God blessed him. “Your name shall no more be Jacob, but Israel. I am God, the All-sufficing. Be fruitful and multiply, and kings shall come from your loins. And the land I gave to Abraham and Isaac, I will give to you.” Jacob then erected a memorial there.

Now Rachel was pregnant. On their journey, she had difficulty giving birth. The midwife said to her, “Do not be afraid, for this one, too, is a son for you.” When her soul departed in death, she named him Ben-oni, but Jacob named him Benjamin. They buried Rachel with a tombstone.

Jacob journeyed to his father Isaac in the land of Canaan. Isaac then died at one hundred and eighty years with his sons, Esau and Jacob, burying him.

Esau took his families and his properties to another land, away from his brother Jacob, for their wealth was too great for them to dwell together.

2. Why do you think Esau forgave Jacob? How do you forgive someone?

3. With whom did Jacob wrestle?

4. What is the significance of Jacob having his name changed to Israel? If you could change your name, what would you change it to and why? 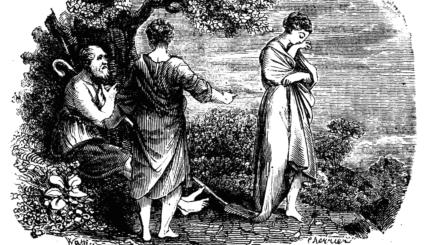