“May God make you like Ephraim and Menashe” (Genesis 48:20). Parents routinely offer this blessing on Shabbat at the Friday night dinner table and its dramatic origins are found in this week’s Torah portion, Vayechi. The scene: Jacob summons his favorite son Joseph so he can bless him before he dies. Joseph arrives with his two sons, Menashe, the firstborn, and Ephraim, his younger brother. Jacob blesses Joseph’s sons and elevates their family status so they are on par with his own biological children, entitling them to a future inheritance. He then crosses his arms so that he can give the younger the right hand blessing that rightfully belongs to the firstborn. Joseph must have been dumbfounded. Didn’t Jacob learn about the risks of upending the birth order from his and Joseph’s experience?!

Joseph is distressed when his father begins to bless the younger son first. When he tries to correct his father’s “mistake,” Jacob assures Joseph that he is intentionally elevating the younger son over the elder. He concludes by saying to the boys: “By you shall Israel invoke blessings, saying: May God make you like Ephraim and Menashe.” Jacob doesn’t explain his decision to elevate the younger over the older, but his choice is likely related to his many losses because Jacob chooses the son whose name will challenge future generations to learn how to live with the pain of loss.

The name of Joseph’s firstborn is striking. The Hebrew root of the name Menashe means “to forget,” and Joseph is transparent about the name’s symbolic meaning: “God has made me forget my hardship and my parental home completely” (Genesis 41:51). When Joseph becomes a parent for the first time, he doesn’t want to merely write a new chapter in his life’s story, but an entirely new story. He believes that he can force himself to forget the suffering he experienced at the hands of his family — suffering that began, ironically, when his father Jacob elevated him above his brothers.

But the name Joseph gives to his second child reveals a different attitude. Ephraim’s name means “God has made me fertile in the land of my affliction” (Genesis 41:51). At Ephraim’s birth, Joseph acknowledges that although he has prospered, he lives in a foreign land that afflicts him. The Torah doesn’t explicitly say why Joseph, now a close advisor to the Pharaoh and a wealthy man, feels afflicted, but it’s not difficult to speculate. We witness how emotional Joseph becomes when he reveals his identity to his brothers and how tearful he is when he greets his father after many years. He never forgot them.

Returning to the scene on Jacob’s deathbed, Joseph does not seem to understand why invoking Menashe’s name first as a blessing for the Jewish people is inappropriate. Jacob, however, knows that he cannot have the Jewish people bless themselves primarily through the son whose name means to forget the past. He chooses to place Ephraim first because the meaning of his name acknowledges both past and present relationships, whether painful or enriching.

Human relationships are complex. They’re intermingled with disappointment and appreciation, frustration and fulfillment. If Jacob had decided to bless the Jewish people primarily through Menashe, he would have permitted those who suffered a loss to suppress the memories of a difficult relationship. But in the wisdom of his later years, Jacob knew that if we subdue the painful aspects of a relationship we will also forget its enriching facets. Jacob’s choice of using Ephraim as the vehicle that will convey a blessing for the Jewish people is wise. And like Jacob, we can live a full life by integrating all aspects of our relationship with the people we mourn and who were so much a part of our lives.

This article initially appeared in My Jewish Learning’s Reading Torah Through Grief newsletter on Jan. 6, 2023. To sign up to receive this newsletter each week in your inbox, click here. 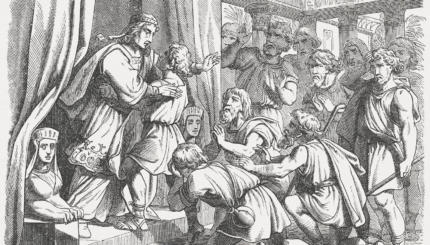 Experiencing loss can enable us to better relate to the pain of others.

Jacob’s courage shows that by facing our fears, we can overcome them and move forward.