When a loved one dies, we only gradually come to recognize the full impact of how death changes our lives. At first, we may find ourselves trying in vain to recall the melody that mom used to hum when she tucked us into bed, or the name of the friend who set up mom and dad on a blind date. Then comes the series of firsts — the holidays, vacations and milestones celebrations without our loved ones. Over time, we come to understand the deep emptiness that comes in death’s aftermath.

The paradigm of unfinished dreams passing from generation to generation begins with Abraham, who was called by God to journey to an unknown land God only later identifies as Canaan: “Go forth from your native land and from your father’s house to the land that I will show you.” (Genesis 12:1) Leaving all that was familiar to him, and trusting in God to fulfill the promise to make Abraham into a great nation, Abraham embarked on a mission that would culminate many generations later in the giving of the Torah to his descendants.

But just a few verses earlier, in Parashat Noach, we learn that it was actually Abraham’s father, Terah, who initiated the family’s journey to Canaan: “Terah took his son Abram, his grandson Lot the son of Haran, and his daughter-in-law Sarai, the wife of his son Abram, and they set out together from Ur of the Chaldeans for the land of Canaan; but when they had come as far as Haran, they settled there.” (Genesis 11:31)

The Torah is silent about why Terah terminated his trip in Haran, about halfway to Canaan. But when God called Abraham to leave for an unnamed land, the prospect of resettling in Canaan was already familiar to him. Perhaps Abraham did not ask God where he was headed because he already suspected it was Canaan. Abraham simply picks up where his father left off, heeding God’s command in fulfillment of his father’s dream.

We see something similar later in the Bible in the story of Naomi and Ruth. In the opening verses of the Book of Ruth, we learn that Naomi, her husband Elimelech, and two sons leave their famine-plagued home in Bethlehem for Moab. Once there, Naomi experiences several unimaginable tragedies in rapid succession. Her husband dies, as do her two married sons. Left with only two foreign daughters-in-law, Naomi comes to terms with the bitter reality that this is the end of her family line. But one daughter-in-law, Ruth, refuses to abandon her. The story ends on a high note of consolation when Ruth marries Naomi’s relative and bears a child, reinstating the family’s continuity.

This text makes another point: A person in one generation can complete the dreams of another even if they are not biologically related. Although Ruth gives birth to a child, the infant is identified as Naomi’s child. That child would go on to become the grandfather of King David, one of Israel’s greatest leaders and poets. Obed’s birth not only restores Naomi’s dream of a family, but gives the Jewish people a future leader.

Many other biblical examples mirror the real-world reality that often our dreams are only partially fulfilled in our lifetimes. These stories of uncompleted dreams remind us to center our lives around dreams that are worthy and to humbly accept that unfulfilled dreams are a part of life. We should still dream, trusting that what we cannot achieve in our own lifetimes may be resumed by those that follow us.

Are there aspects of a loved one’s dream that inspire us to dedicate time to it? What dreams will we leave that might inspire those who come after us? One generation, in life and death, can elevate the other. People pass, but dreams live on.

This article initially appeared in My Jewish Learning’s Reading Torah Through Grief newsletter on Oct. 28, 2022. To sign up to receive this newsletter each week in your inbox, click here. 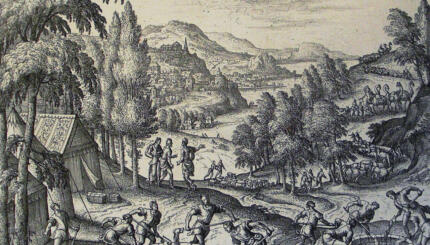 The story of Isaac reminds us that we can flow again into the stream of life.

We can choose how we respond to situations over which we have no control.