In the beginning of God’s creating the heavens and the earth, when the earth was astonishingly empty and dark, God’s spirit hovered upon the surface of the waters.

On the sixth day, God said, “Let the earth bring forth living creatures, each according to its kind, livestock, land animal, beast or creeper of the ground.  Let us make a human, male and female, in Our image. They shall rule over all the living things.” So God created humans and blessed them saying, “Be fruitful and multiply.” God saw that all God created was good.

After Heaven and Earth and their array came to exist in six days, God ceased creating on the seventh day and sanctified the day of rest and made it holy.

When God completed Heaven and Earth and there had yet to be rain or man to work, a mist ascended from the earth and watered. And God formed man from the ground and blew into his nostrils the soul of life and man became a living being. God placed the man in the Garden God planted in Eden with its many trees, including The Tree of Life and The Tree of Knowledge of Good and Bad. God said to the man God had created, “You are to work in the Garden and guard it. You can eat fruit from all the trees except the Tree of Knowledge of Good and Bad.  For on the day you eat it, you shall definitely die.”

God told the man, Adam, to name all the living things. Afterwards God saw Adam alone. God said, “it is not good for man to be alone” and God cast him into a deep sleep and brought forth what Adam would call “the bone of my bones, the flesh of my flesh,” a woman, and named her Eve.  “Therefore a man shall leave his father and his mother and cling to his wife and they shall become one flesh.”  Adam and Eve were naked and not ashamed.

The serpent, now, was the most cunning of all the wild beasts made by God. The serpent said to the woman, “You will certainly not die! God knows on the day you eat from it, your eyes will be opened and you will be like God, knowing good and evil.”

Eve saw the fruit was beautiful to look at and could be a means to wisdom and ate of it, as did Adam, and their eyes were opened.  With open eyes they realized they were naked and rushed to make clothes out of leaves.

The man and the woman heard God in the Garden and hid. God called to man, “Where are you?” And the man replied, ” hid because I was naked.” God said “Who told you that you were naked? Did you eat from the tree you were commanded not to eat?” Adam said, “I got it from the woman.” And the woman said, “The serpent seduced me and I ate it.”

Thereafter God banished Adam and Eve from the Garden of Eden and guarded the Tree of Life and Immortality with a cherubic angel and the flame of an ever-turning sword.

Adam knew his wife Eve and when she conceived and bore Cain she said, “I have born a man with the help of God.” Eve then bore Cain’s brother Abel.  Cain became a farmer and made an offering of his fruit to God.  Able became a shepherd and gave the best from his flock of sheep.  God smiled upon Abel but not upon Cain.  Cain became greatly distress.  God said to Cain, “Why are you sad? You can improve.  Now is the time you must choose to act good or bad.  Sin lusts after you but you can dominate it.  Evil tempts you so that you can learn to master it.”

In time, Cain killed Abel.  God said to Cain, “Where is your brother Abel?”  Cain said, “I do not know. Am I my brother’s keeper?”  God said, “Your brother’s blood cries to me from the ground so now this soil shall no longer give you strength and you shall become restless upon the earth.” And Cain replied, “My sin is greater than I can bear and someone will kill me” God said, “I shall put a mark on your forehead so any would be killers will know your death will be avenged seven-fold.”

Cain left God’s Presence and settled in the land of Nod with his wife. He became a city-builder and they had a son Enoch to begin the lineage of Cain.  The lineage of Adam begins with Eve giving birth to Seth and then Enosh.

Many generations later, God saw that man’s wickedness on earth was increasing.  Every day man’s innermost thoughts were plotting evil.  God reconsidered God’s creation of humans and grieved deeply.  God said, “I will obliterate all of my creations, from humans to birds, I will destroy every living thing on the earth.” But Noah found favor in the eyes of God.

1) How do you separate the light and darkness in your life?

2) Is it the Tree of Knowledge of Good and Evil or Good and Bad? Why?

3) How do you handle temptation?

4)  What actions have you reconsidered? 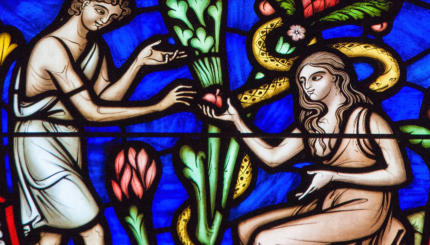 Adam's naming of the animals raises complex issues, including the deeper meanings of our names.