In this week’s Torah portion, Yitro, we read of the revelation at Sinai that follows last week’s Exodus from Egypt. What is this relationship between freedom and revelation, between Exodus and Sinai?

The Hasidic master R. Yehudah Leib Alter of Ger explains that Sinai follows the Exodus because “the purpose of all the commandments…is so that every person of Israel be free (Sefat Emet, Language of Truth, pp. 319-320).” Revelation follows liberation because while freedom might have been initiated at the Exodus, it is only completed at Sinai.

Freedom From and Freedom To

Perhaps the clearest example of this paradox is found in our tradition’s attitude toward education. Learning Torah is understood by the tradition as a positive commandment that one is obligated to fulfill (see Maimonides, Laws of Talmud Torah). One is expected to find time to study and to utilize one’s financial resources to ensure that both oneself and one’s children are educated. This requirement of education is understood as essential to freedom, to positive liberty, even though it seems to limit one’s individual freedom of time and financial priorities.

At the completion of revelation Moses descends from the mountain with the tablets of the law in his hand: “the tablets were God’s work, and the writing was God’s writing, engraved upon the tablets (Exodus 32:16).” The Rabbis famously comment, “‘engraved (harut) upon the Tablets’–do not read it as engraved (harut) but rather as free (heirut) for there is no free person but one who engages in the study of Torah (Pirkei Avot 6:2).”

Here we see the relationship between Exodus and Sinai. Only through the process of learning the skills, insight, and wisdom to live an empowered life can one truly be free.

A later biblical injunction declares the laws of the Jubilee year. Every 50th year all indentured servants are freed, all debts are forgiven, the land is allowed to rest, and each person returns to his or her ancestral holdings–a complete and equitable redistribution of land and a re-balancing of wealth. The Torah explains, “You shall proclaim liberty throughout the land for all its inhabitants (Leviticus 25:10).”

The Torah specifically articulates that the jubilee year is to guarantee freedom for all its inhabitants. The limitation on wealth acquisition for some (debt forgiveness, redemption of indentured servants, and relinquishing land ownership) is necessary in order to maintain liberty for all.

True freedom, then, is not only Exodus, freedom from oppression, but Sinai, the positive liberty of access to education and economic independence. The commandments that enjoin these freedoms, then, do not hamper liberty, but enhance it. It is in this way that Sinai, the giving of laws that restrict human action, actually completes the process of freedom. And these commandments apply to us still. We are called on to daily “proclaim liberty throughout the land.”

Yet in both our own backyard and across the developing world both these freedoms lie in danger. In many countries even the negative liberty of human and democratic rights is unattainable. In other countries, access to economic well being, basic education, health care, and the ability to participate in government are far from secure. For such countries Exodus may have happened, but Sinai awaits.

We must use our resources and our liberties to offer financial support, political action, and direct service in pursuit of the goal of liberty for all. We are obligated by the lessons of this Torah portion to establish precisely those laws and protections, those restrictions, which allow true liberty to flourish and enable all the inhabitants of the world to access the resources and training necessary to achieve freedom. May we be inspired to redeem those enslaved, to proclaim liberty throughout the land, and to stand together at the foot of Mount Sinai, truly free.

Is Freedom A Jewish Virtue?

Are you on the freedom bandwagon yet? Celebrations of the concept of freedom seem to be permeating the cultural-political zeitgeist ... 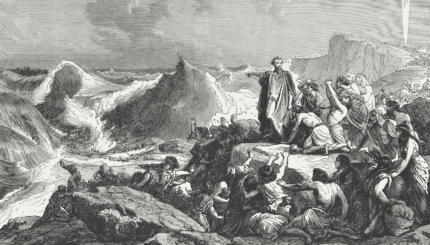 The Oft-Misquoted Catchphrase of the Exodus

'Let My People Go' is only half the equation.

At Passover & Always: On Freedom, Religion… And Welcoming Everyone

Sometimes, being Southern and Jewish means raising our voice. The Board of Directors of the Institute of Southern Jewish Life ...