I would like to take a look at the end of Genesis, where the action takes place years after the better-known stories of the Creation and the Garden of Eden.

By the time we get to the end of the portion, we are meant to be well and truly depressed. Adam and Eve have been thrown out of Eden, and along with the snake and the very earth itself, have been cursed. Cain has killed Abel. God’s decision to destroy the world He created, with the flood, is just around the corner. At the birth of Noah (“Noach,” in Hebrew), there is a sense of failure, of something having gone horribly wrong with the world. His father, Lemekh, names him, saying (chapter 5, verse 29) “this one will comfort us for our actions and the sorrow of our hands, from the earth, which the Lord has cursed.” The Hebrew word for ‘comfort’ is ‘yeNACHamainu,’ hence the name “Noach.” Apparently, Lemekh felt his age to be a distressed one, in need of comfort and assistance, and he looked to his newborn son for these things.

The medieval commentaries supply a number of possibilities for the kinds of comfort that Lemekh thought his son Noah might give to his troubled time. There are, generally speaking, two approaches that they take. The one, expressed by Rashi, the Radak, and others commentaries, sees Lemekh as a prophet, foreseeing a special role for his new-born son. According to them, the prophecy contained in the naming of Noah was that he will become the inventor of ploughs and other farming implements, ameliorating the post-Edenic curse on the earth (‘thorns and thistles it shall bring forth for you’), and easing mankind’s burden of labor, which Lemekh calls ‘the sorrow of our hands’). The ibn Ezra says that Lemekh’s prophecy refers to the fact that the sinful world will soon be destroyed by the flood, and that it is his newborn son Noah who will be its salvation.

The other exegetical approach is unwilling to turn Lemekh into a prophet. It sees his words at the birth of his son as a prayer, not a prophecy. The S’forno says: “[Lemekh] prayed that he would bring comfort [to the world] from its [evil] actions.” The Rashbam, and others, point out that Noah was the first child born after the death of Adam; Lemekh prayed that this new life, coming after the death of he who was exiled from Eden and cursed, would somehow augur the end of the sorry situation in which an accursed humanity found itself.

A Midrash, which appears in the Yalkut Reuveni and is quoted by Rabbi Yehuda HaChasid (mid-13th century), adds a fascinating element to the naming of Noah. According to this Midrash, Noah was the first human being born with an opposable thumb(!). Until his birth, mankind had not evolved sufficiently to make, hold, and use tools, and, instead, dug the earth with their paw-like hands. With a human hand, with proper fingers and an opposable thumb, mankind evolved into tool-makers and users. This Midrash obviously takes Lemekh’s words ‘the sorrow of our hands’ quite literally, and complements the tradition, which sees Noah as the inventor of farming implements.

It seems to me that all these interpretations share something; an important insight into parenting and parental expectations. For Lemekh, the world was a dark, difficult place. He saw the birth of a child as an opportunity for hope, for change, for improvement, for faith.

We can understand his relationship to his newborn son in three ways. The way the first group of commentators mentioned above do; as a prophet, with a very specific plan for Noah, a specific vision of how this child could change the world, or, as the second group understands Lemekh; as having a generalized hope, a prayer, that somehow this new life could bring an improvement, a salvation, to the difficult world he knew, or, as in the ‘opposable thumb’ Midrash, where Lemekh saw in his newborn son something really different, and special, and appreciated this difference as something that could transform, and improve the world.  But there is one, underlying message, expressed in three ways, about being a parent.

That message is this: In all three understandings of Lemekh as a father, we are presented with a parent who, one way or another, saw in his newborn child the possibility of greatness. The world into which Noah was born was a horrible one; accursed, exiled, on the cusp of destruction. Lemekh saw in his son, in this new life, the engine for change, for possibility, for evolution, for salvation. And, by naming him Noah–comfort–he passed his vision, his hope for a better world, and his appreciation of Noah’s ability to effect this change, on to his son.

We often wonder, when faced with greatness, what made this person great? What gave him or her the strength, the vision, the energy, the talent, to accomplish so much? It may be that Noah grew to greatness, to stand above the rest of his generation and, literally, save the world, because he was Lemekh’s son, because he was the child of a parent who imagined, prayed for, and saw in Noah the possibility of greatness, and who told Noah, by naming him, how he felt about him, and what he saw in him. This, perhaps, is how parents can try and encourage greatness in their children; by imagining it, believing it, seeing and celebrating it when it is there, and naming it. 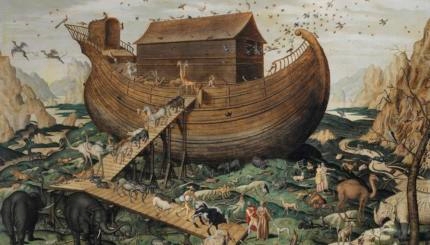 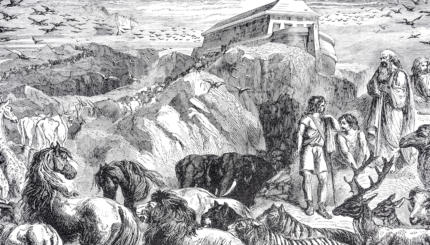