At the foot of a mountain alongside a Christian village in Iraqi Kurdistan lies a partially collapsed compound: the tomb traditionally believed to belong to the biblical prophet Nahum.

For centuries the tomb and surrounding landscape, now largely in ruins, played host to a major Shavuot pilgrimage with elaborate rituals, which last occurred in 1951. In the words of a popular Kurdish Jewish saying: “He who has not witnessed the celebration of pilgrimage to Nahum’s Tomb has not seen real joy.”

Little is known about the prophet Nahum, with the opening verse of the biblical book named after him only revealing that he is from El-Kosh. It is unclear which town this refers to, or whether Nahum is actually buried in this shrine that bears his name in al-Qosh, Iraq. (Indeed, several other sites also claim to be Nahum’s tomb.) Nahum’s prophesy in the Bible is a rousing call made while in exile, which perhaps resonated with Kurdish Jews and prompted the multi-day pilgrimage each year.

While al-Qosh is a Christian village, Nahum’s tomb was until about the middle of the 20th century owned and administered by the Jewish community. According to sources, the complex is hundreds of years old and underwent a major renovation in 1796, funded by Jewish communal leaders from Baghdad and Basra.

Families from the Jewish community in the nearby northern Iraqi city of Mosul took responsibility for maintaining the compound and hiring a guard. The last Jewish guard to live there was Moshe al-Qoshi and his family. In the 20th century, Sasson Rahamim Tzemah of Mosul spent many years and significant funds renovating the site.

When the majority of the Kurdish Jewish community moved to Israel in 1951, following the passing of the Denaturalization Law, the tomb was left in the hands of Sami Jajouhana, a Chaldean, who has struggled mightily to maintain the site ever since.

A visitor to the shrine during World War I described how the shrine’s door was opened to visitors by a guardian with a large key on a long chain attached to his clothing. Persian carpets covered the floor. The walls of the compound contained hand-written Hebrew notes with prayers left by visitors, similar to notes tucked into Jerusalem’s Wailing Wall.

In the middle of the main room, closed with an iron lock, stood a tall case covered in a green calico cloth with a gold crown on top, where Nahum’s remains are said to be interred. In addition to the main hall surrounding Nahum’s tomb, the compound had apartments and rooms to accommodate pilgrims.

Today, a faded green cloth still surrounds the sarcophagus and Hebrew plaques remain on the walls, though the roof of the shrine has partially collapsed and several walls are crumbling.

Shavuot was known locally as “Eid al-Ziyara,” Judeo-Arabic for “festival of the pilgrimage.” While individual pilgrims visited the shrine throughout the year, during the Shavuot season several thousand people–some sources say almost the entire Jewish population of Mosul and surrounding villages–would arrive en masse.

Young and old came together in special holiday dress and camped in the compound’s guest houses or in tents spread out in the surrounding fields. Some stayed for a full two weeks. Local communities formed their own prayer groups, and singing voices filled the village and the compound, which was lit at night by hundreds of candles.

The highlight of the pilgrimage was a dramatic staging of the giving of the Ten Commandments at Mount Sinai, and a play supposed to pre-figure the battle of Gog and Magog.

While there are varying accounts of the festivities, the theatrics began after a dawn service on the first day of Shavuot. Led by an entourage carrying Torah scrolls, a large group climbed for three hours to the top of the nearby mountain, called “Mount Sinai” by locals. A brief mountain-top ceremony featured the recitation of a prayer commemorating the giving of the Ten Commandments.

Then the participants would descend the mountain in a war-like procession, accompanied by drummers and men carrying swords. At the foot of the mountain, armed men acted out a battle, with loud cries, clouds of dust, and the sound of clashing weapons–evoking the prophetic account of the battle of Gog and Magog that according to Jewish lore will precede the coming of the Messiah.

Later, inside the tomb, an hour-long celebration featured a reading of an old scroll of the Book of Nahum. Men would surround the tomb, with women listening from the outer complex. Following the reading, men organized themselves by name, in alphabetical order, and marched seven times around the tomb, singing sacred songs. Upon starting the seventh encirclement, the crowd would break into the hymn: “Rejoice in the joy of the Prophet Nahum!” At this point women joined the procession around the tomb, singing prayers in Arabic and Kurdish while dancing and clapping.

Over night, fruits would be placed atop the tomb by some of the pilgrims. The next day, all the pilgrims would file past the tomb, make a donation, and then taste a sample of the fruits, now believed to have received Nahum’s blessing.

Reprinted with permission from the Diarna Project.

Diarna, “Our Homes” in Judeo-Arabic, is a project dedicated to virtually preserving Mizrahi (“Eastern”) Jewish history through the lens of physical location. Satellite imagery, photographs, videos, oral histories, panoramas, and even three-dimensional models, offer a unique digital window onto sites and communities disappearing before our very eyes. To begin your free trip–no passport or airfare required–explore Diarna’s website (http://www.diarna.org). 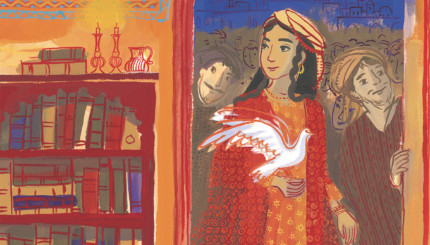 Who Was Asenath Barazani?

Historical events and the development of mysticism leave their mark on this festival.