Kabbalistic authors drew connections between Shabbat and some of the ten sefirot, which are personal aspects of the one hidden God, often represented pictorially by a diagram resembling a human body. Adapted from The Mystic Quest: An Introduction to Jewish Mysticism. Reprinted with permission of the publisher. © 1988, Jason Aronson Inc.

Most modern Sabbath observers are unaware of the extent to which Jewish mystics, particularly the kabbalists of Safed in the sixteenth century, introduced into Jewish practice new rituals that reflected their mystical view of the Sabbath. For example, it was their custom to go out into the fields to greet the Sabbath. They went out dressed in white ready to join the bride as her entourage in the wedding ceremony. They would face the west from where the Shekhinah would rise as the sun set. The order of prayers for the Friday evening service that accompanied this ritual was established by these mystics as a unitive and restorative ritual. Their order, including the mystical hymn Lekha Dodi, prevails even today. The Zohar included certain blessings such as “who extends a tent of peace” (ha-pores sukkat shalom) and excluded certain prayers such as “He is merciful and acquits transgression” (ve-hu rahum yikhapper avvon) from the Friday evening service, to illustrate the notion that unity prevails and severity is annulled on the Sabbath.

In many traditional Hasidic prayer books the following passage from the Zohar is to be recited on Friday night:

The mystery of Sabbath: Sabbath is unification through oneness, which causes the mystery of oneness to dwell upon it. Prayer, which the Sabbath raises up, unifies and perfects the holy and precious throne through the mystery of oneness so that the divine and holy King may sit upon it. When the Sabbath begins, she is made one and separates from the other side [i.e., evil] and all the forces of severity pass away. She remains unified with the holy light and is adorned with many crowns by the holy King. All the powers of ire and forces of severity are uprooted and there is no evil dominion upon the worlds. Her face is radiant with divine light and she is adorned below with the holy people.

The idea that a special soul enters the body and resides there during the Sabbath dates back to the rabbinic period. The Zohar expands this notion and explains that the Sabbath is “the day of the soul, not the body.”

The elaborate Friday evening service is not the only mystical Sabbath rite that entered normative practice. The Zohar explains that the head of the household must accomplish ten things at the Sabbath table, corresponding to the ten sefirot. Although many of these are rabbinic practices, the enumeration of ten central customs and the associated symbolism are Zoharic.

3. Perform the ritual handwashing before breaking bread: This rabbinic law is a requirement before eating bread. The Zohar requires that one hold a cup filled with water in the right hand, which symbolizes hesed, pass the cup to the left hand, which symbolizes din, and pour it first upon the right hand then pass the cup again and pour upon the left. This is done so that the priority of hesed over din on the Sabbath is emphasized.

4. Put two loaves of bread on the table: Two loaves are traditionally used to recall the double portion of manna that rained down before the Sabbath. According to the Zohar, the two loaves placed together symbolize the union of malkhut and tiferet. The Zohar requires that the diners eat from the lower of the two loaves, when one is placed on top of the other, to symbolize the lower sefirot, especially malkhut.

5. Eat three festive meals: The major meals of the Sabbath are Friday evening, Saturday lunch, and later on Saturday following the late afternoon service. According to the Zohar these meals ceremoniously invoke the power of malkhut, keter, and tiferet, respectively. Special songs (zemirot) are sung at each of the meals, many of which were composed as hymns to the sefirah associated with that meal.

6. Discuss Torah at the table: According to the rabbinic tradition, the Shekhinah dwells at any table where Torah is discussed.

7. Welcome poor guests to the table: Charitable concern for the poor is a feature of the social consciousness of the Zohar. The poor are believed to bring special merit to the table and aid in the achievement of unity.

8. Perform ritual handwashing after the meal: This is a rabbinic custom called “final ” (mayim aharonim). It is done after the meal before saying the blessing after food. The Zohar explains that this custom is performed in order to cleanse the hands of evil and to remove the impurities that cling to them. It is also intended to wash away particles of food which are then considered a concession and nourishment to the evil forces.

9. Recite the blessing after food: This rabbinic practice is associated, according to the Zohar, with the sefirah of hesed. The Zohar explains that one who says this blessing with intention will invoke hesed upon the world.

These practices illustrate the way Jewish mystics reinterpret traditional practices in light of mystical teachings. The Sabbath is turned into a theurgic drama that unfolds in sequence.

The mystics also introduced completely new customs. For example the custom of singing Eshet Hayyil (“Woman of Valor”) as a hymn at the Sabbath table–in praise of the wife and alluding to the Shekkinah–was introduced by the Safed Kabbalists.

Ritual innovation can also be seen in the Zohar’s approach to human sexuality. The Zohar considers Sabbath the most propitious occasion for unitive and restorative mysticism through human sexual intercourse. Sexual intercourse on Sabbath eve produces the special Sabbath soul. Therefore, this is the time when a righteous man and woman should have sexual contact. 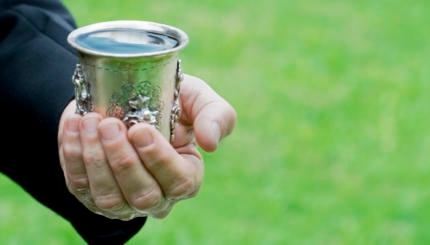 Jewish mysticism sees the sanctification of wine as a spiritual practice to manifest God's presence in the world.

What happens during the Friday night prayer service.