One can expect to hear people shout “mazel tov” at celebrations like Jewish weddings just after the glass is broken, at brit milah (bris) ceremonies, and at bar and bat mitzvahs. Mazel tov is an appropriate response to any good news, from an engagement to a graduation, a new job, a new house, or any other honor or milestone. In modern Israeli Hebrew, it is common to congratulate people on their birthday using this phrase.

Mazel tov isn’t always a perfect substitute for the English “congratulations.” Some people avoid saying mazel tov to a pregnant woman out of superstition that something might happen to the baby. Instead, it is customary to say “b’sha’ah tovah,” (beh-shah-AH toe-VAH) meaning “at a good time.” The implicit wish is that the baby will be born healthy and safe — at which point mazel tov would be an appropriate greeting.

The phrase mazel tov literally means “a good constellation,” implying that the recipient is experiencing good fortune because the stars have aligned for them. In fact, the medieval song incorporating this phrase — siman tov u’mazal tov, “a good sign, a good constellation” — makes this even more explicit.

Ancient rabbinic texts speak of good and bad mazalot (constellations), but the phrase mazel tov was not used in a congratulatory manner until the 19th century. A reasonable literal translation of the phrase might be “good luck” but this doesn’t, as it does in English, carry the connotation of hoping for future fortune. Rather, it acknowledges present good fortune. To wish a person future luck in Hebrew, one would say b’hatzlachah — may you have success. 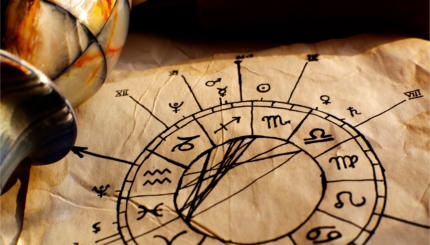 Talmudic rabbis believed in astrology, but they thought the Jews were miraculously immune from the stars' influence.

Jewish mystics took Judaism's reverence for the Hebrew language one step further, venerating the Hebrew letters themselves and considering them paths to the Divine.