The epic rivalry between Jacob and Esau, the twins born to Isaac and Rebecca, is vividly conjured in this week’s Torah portion. While Jacob was a simple man, content to stay inside, Esau was a hunter, a man of the outdoors. Whereas Jacob was smooth, the ruddy Esau was covered in hair. Most poignantly, the brothers were separated by their parents’ affections. With smarting candor, the portion informs us that Isaac favored Esau because he had a taste for meat, craving the game that his firstborn hunted. Rebecca — perhaps compelled to balance the scales of affection — favored the younger Jacob.

Taking a cue from Isaac’s preferences, the brothers’ rivalry unfolded around the appetites and cravings surrounding the basic human need for sustenance. In jockeying for familial power, the brothers used food as the weapon for shifting, manipulating and securing that power. And it was food — and in whose hands it was most deftly controlled — that determined their fates.

We first encounter the grown brothers as Jacob stirs a pot of lentil stew. Returning from the hunting fields, a famished Esau insists that he is “at the point of death” and begs some food from his brother. Jacob obliges, but not before extracting a vow from Esau to sell his birthright in exchange. The deal done, “Jacob then gave Esau bread and lentil stew, and he rose and went away” (Genesis 25:29-34).

While Esau walks away from this unsavory exchange, it is hard for us to do so. One cannot help but feel unsettled by Jacob’s mercenary cunning, by the ease with which he exploits his brother’s hunger. And, one cannot help but be struck by this episode’s placement in the portion’s narrative sequence, following immediately after we learn of Isaac’s preference for Esau. The unspoken transition seems to imply that from under the shadow of his father’s disfavor, Jacob has learned the potency of food in the human economy. While Isaac may use it to traffic in love, Jacob wields it to buy prestige. Having learned this lesson, Jacob is well poised to execute his coup de grâce, to leverage his father’s appetite into a fulfillment of the purchased birthright.

We next encounter the brothers when the ailing and blind Isaac asks Esau to hunt some game and prepare a delicious dish. Aware that he is close to death, Isaac explains that the sustaining morsels will allow him to give Esau his “innermost blessing.” What happens next is well known. Disguised as Esau and laden with fresh bread and “two choice kids” delectably prepared, Jacob enters Isaac’s tent, seeking the firstborn’s blessing.

The ruse works; Jacob satisfies his father’s gustatory cravings and thus receives the blessing intended for Esau: he and his offspring will be masters over his brother and his offspring, powerful among nations, and amply provided for by God (Genesis 27:1-29). Jacob has clinched the birthright, deftly using his brother’s and father’s appetites to secure his dominance.

Jacob’s use of food to wield power is an ageless tactic, in our times deployed on a global scale to devastating effect. The worldwide crisis in rising food prices has added an estimated 44 million individuals to the ranks of the malnourished, bringing the total to about one in seven people on our planet. Amazingly, as prices and hunger have risen, so have the profits of large-scale agribusiness and agricultural commodity trading companies.

No single cause has created this crisis, but the effects of the rich world’s trade policies–and thus our own responsibility–cannot be ignored. While important benefits can accrue to developing nations from liberalizing trade agreements, such agreements have also increased dependence on imports from rich countries and made developing nations vulnerable to volatile markets and rising prices. Oxfam International recently summarized how such policies spread hunger: “trade agreements have enabled rich countries to dump highly subsidized commodities on developing country markets…without providing adequate safeguard mechanisms to defend vulnerable sectors, and maintained significant barriers to rich country markets for the agricultural products in which poor countries are most competitive.”And within the nations that have been so affected, it is the poorest of the poor and women who suffer most acutely.

The policies sustaining our global food market allow rich countries and corporations to reap profit and power while the global poor grow increasingly hungry. As we assess our responses to the story of the birthright, we should allow for the uncomfortable possibility that our patriarch’s actions were deeply flawed. Let us learn from our deep unease with Jacob’s exploitation of Esau’s hunger. Our brothers’ hunger indeed calls out to us from the earth: Whether we exploit it or allay it is our choice.

Isaac's decision to bless both of his sons gives us hope for achieving a peaceful solution to the conflict between Jews and Palestinians. 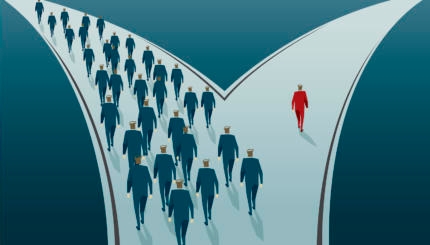