Quiz: What Ritual Object Goes With This Holiday

Creating ritual objects in preparation for a bar/bat mitzvah can add another layer of personal meaning and is  also a way to involve other family members. A mother can make a tallit for which the grandmother needlepoints the atara, or crown. This article offers a “recipe” for creating a tallit as well as for tying its tzitzit, which are the fringes attached to the tallit garment. Reprinted with permission from The Jewish Catalog, published by the Jewish Publication Society.

There are no limitations as to the size or decoration of the tallit except for the taste, sensitivities, and personality of the person who is going to wear it. Within this, you are free to explore the range of your creativity and imagination. Some suggestions follow, but these are meant as guides or structures upon which you are invited to impose yourself.

Watch this video to see a demonstration of how to make a tallit and tie tzitzit.

The simplest and often the most elegant way to make a tallit is as follows. Carefully search out a piece of material that appeals to you and in which you would like to wrap yourself. Buy it. Hem the ends, if necessary. Attach the tzitzit, or fringes [see below for how to tie the fringes]. Wear it beautifully.

Some refinements on the theme:

2. When selecting material, pay attention to the weight and lay of the cloth. Since it takes a lot of material to make a tallit, if it is too heavy it becomes uncomfortable. If it is not flexible, it is difficult to wear.

3. It is probably best to get a double-sided piece of material (referring to the print or design), since both the inside and outside of the tallit are visible.

4. A good size is: length–the span of your arms; width–36-48 inches [it’s a good idea to measure some existing tallits to get an idea of what size will work best for you].

5. If the material ravels easily, you might want to pull threads for three inches on each end, then gather 10 to 20 threads and make a knot, as extra fringe. This, however, is not the necessary fringe for the tallit.

6. If you want this fringe but either cannot or do not want to unravel the ends, you can buy fringing at fabric stores and sew this to the ends.

7. If you want neither to buy a print nor to use a plain color, there are many possibilities for embellishment and personal creativity:

a. Fabric stores sell various-sized colored, designed hemming material (ribbon), which is perfect for use as stripes. Simply decide the progression and spacing you want and sew them to the material. This should be done carefully to ensure that the stripes will lie straight. One disadvantage of this method is that the stitches show through to the other side.

b. Many people like to embroider the stripes, an obviously more difficult and intricate process. Karen Abromovitz recommends using a white or off-white basket weave or other large weave as the base material so that you can use the threads as a grid for the embroidery.

c. Other methods can be tried such as tie-dyeing or batiking.

d. We have also heard of the possibility of silkscreening stripes.

8. An atara–or crown–is often placed on the edge of one side for the purpose of providing some spatial orientation for the tallit (or tallit-wearer). This can be made from bought material–hemming ribbon, brocade, velvet–or silver and gold crowns can be purchased at most Hebrew bookstores. Or this piece can be embroidered. It is often effective and beautiful to embroider the blessing, or one of the many phrases from the ritual for putting on the tallit, or any other Hebrew phrase that you feel would deepen the wearer’s kavvanah [spiritual focus].

9. If you buy a little extra material, you can cut out patches for the corners. This both reinforces the area and gives a clear indication of the corner. These also can be embroidered with inscriptions, flowers, symbols, or any decoration.

How to Tie Tzitzit: Ritual Macrame

1. Before you try tying tzitzit to your tallit, it is advisable to practice with twine or heavy string looped around a chair leg.

2. Although you can spin or devise your own tzitzit strands, it is easier to buy a tzitzit pack, which is available at most Hebrew bookstores.

3. There will be 16 strands in the pack–4 long ones and 12 short ones. Separate these into four groups with one long and three short in each.

4. The longer strand is called the shamash [or helper] and is the one used for the winding.

5. Even up the four strands at one end and push the group through one of the corner holes in the tallit.

6. Even up seven of the eight strands (the four being doubled) and leave the extra length of the shamash hanging to one side.

7. With four strands in one hand and the other four in the other hand, make a double knot near the edge of the material. Take the shamash and wind it around the other seven strands in a spiral–seven turns. Be sure you end the winding where you began–otherwise you may end up with 7 1/2 or 6 1/2 winds. Make another double knot at this point (four over four).

This is the common, and halakhically [according to Jewish law] precise type of tying. There are, however, two variations on this:

1.  A Sephardic tying adds another dimension to the pattern: each time the shamash is brought around, take it under the previous wind before winding it further. This will produce a curving ridge around the tzitzit. This, too, should be practiced before trying it on the tallit.

2. Although not in strict accordance with the halakhah, some tie the tzitzit with the shamash spiraling 10-5-6-5 times respectively.

According to the second way of winding, each section is a different letter of God’s four-letter name.

The central commandment surrounding tzitzit is “And you should see them and remember all of God’s commandments and do them.”

How do the tzitzit do this?

In gematria, tzitzit = 600. In addition, there are eight strands plus five knots. The total is 613–which, according to tradition, is the exact number of commandments–mitzvot–in the Torah. Just to look at them, therefore, is to remember all the mitzvot.

Pronounced: shah-MAHSH, Origin: Hebrew, the helper candle, used to light the other candles on a Hanukkah menorah. 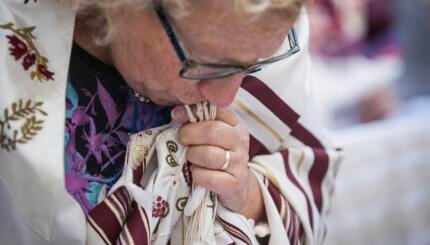