There was a low mist. You could see the glare of headlamps reflected on the high-voltage cables beside the road.

It hadn’t rained, but the ground was still wet with dew; the traffic-lights cast blurred red spots on the asphalt. You could sense the breadth of the camp from miles away. Roads, railway tracks and cables all gradually converged on it. This was a world of straight lines: a grid of rectangles and parallelograms imposed on the autumn sky, on the mist and on the earth itself.

The road drew alongside the railway line. For a while the column pf trucks carrying paper sacks of cement moved at the same speed as an endless train of freight wagons. The truck-drivers in their military greatcoats never once looked at the wagons or at the pale blurred faces inside them.

Then the fence of the camp appeared out of the mist: endless lines of wire strung between reinforced-concrete posts. The wooden barrack-huts stretched out in long broad streets. Their very uniformity was an expression of the unhuman character of this vast camp.

Among a million Russian huts you will never find even two that are exactly the same. Everything that lives is unique. It is unimaginable that two people, or two briar-roses, should be identical… If you attempt to erase the peculiarities and individuality of life by violence, then life itself must suffocate.

The grey-haired engine-driver watched casually yet attentively. Concrete pots, revolving searchlights on high masts, and glass-domed towers flashed by. In the domes stood guards with mounted machine-guns. The driver winked at his mate and the locomotive gave a warning hoot. A brilliantly lit cabin passed by, then a queue of cars beside a striped level-crossing barrier and a red traffic signal.

From the distance came the hoot of an approaching train. The driver turned to his mate. “That’s Zucker. I can tell by the whistle. He’s already unloaded. Now he’s taking the empty wagons back to Munich.”

There was a deafening roar as the two trains met. The air was torn apart, patches of grey flashed past between the wagons — and then the torn shreds of space and grey autumn lights were woven together into a seamless cloth.

The driver’s mate took out a pocket-mirror and looked at his smudged cheek. With a gesture, the driver asked if he could borrow it himself.

“Honestly, comrade Apfel,” said the mate excitedly, “if it wasn’t for all this disinfecting the wagons, we’d be back  home by supper-time. As it is, we’ll be out till four in the morning. As though they couldn’t be disinfected back at the junction!”

The old driver had heard this complaint many times before.  “Give a good long hoot,” he said. “We’re to be put straight through to the main loading area.”

Learn more about how Life and Fate came to America.

The first pages of "The Family Mashber" set the stage for what's to come. Take a look. 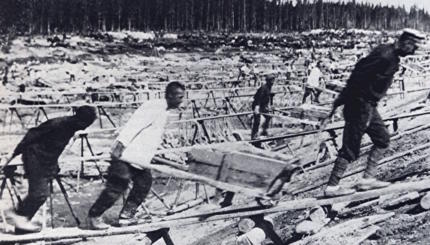