Upon reviewing the stories of two of Jacob’s 12 sons, Joseph and Judah, one may wonder why Judah’s descendants were ultimately crowned with the kingship of Israel rather than those of Joseph.

Stories regarding their chastity are told of both. After her first and second husbands died, both sons of Judah, Tamar dressed as a prostitute and seduced her former father-in-law. Joseph, on the other hand, when confronted by his master Potiphar’s wife, who propositioned him in the privacy of her mansion, ran away. Judah acceded to temptation; Joseph resisted.

Earlier in the portion the Torah tells us that Joseph was thrown into a pit by his brothers and about to be killed. What does Judah do? He suggests that the brothers sell Joseph to a passing caravan of Ishmaelite merchants. Though he is the leader of the brothers, he does not recommend that Joseph be retrieved from the pit and brought back to their father.

Moreover, Judah, according to certain midrashim, married a Canaanite woman at a time when his family was anxious about the children intermarrying. Why, one wonders, was Judah rewarded with the sovereign leadership of Israel?  A good leader is not one who is perfect, but one who falters and finds the strength of purpose to make a fresh start through repentance and improved actions.

The Talmud tells us, “Four died through the serpent’s machinations”–that is, they died because all people are doomed to die and not on account of their personal sins: Benjamin, Amram, Yishai and Caleiv. Benjamin was the most perfect of Jacob’s sons, but he was never featured as a leader. The son accepted as leader, by the brothers and their father, was Judah.

Judah’s public admission of his relations with Tamar made a great impact in Heaven. Following God’s forgiveness of him, the angels pronounced the blessing, which later formed part of the Amidah (the silent meditation) prayer, “Blessed are you, Lord, who is gracious and forgives repeatedly.”

While the sincere confession acknowledges imperfection, it demonstrates moral maturity and responsibility.

The baal teshuvah (one who returns in repentance) has the courage to admit his failures and uses those setbacks to better himself. Leaders are not born perfect, but they constantly strive toward that goal. This is Judah and his claim to royalty. 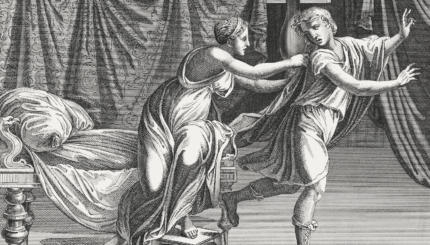 Parashat Vayeshev teaches us the importance of ensuring that we enact justice in light of the ease with which our systems of justice can be abused.

When the Brothers Got Violent

The brothers could not speak peacefully with Joseph because they allowed their anger and resentment to control them.