All The Days Of Our Lives

Excerpted with permission from Searching for Meaning in Midrash (Jewish Publication Society).

That very day the Lord spoke to Moses: Ascend these heights of Abarim to Mount Nebo, which is in the land of Moab facing Jericho, and view the land of Canaan, which I am giving to the Israelites as their holding. You shall die on the mountain that you are about to ascend, and shall be gathered to your kin, as your brother Aaron died on Mount Hor and was gathered to his kind; for you both broke faith with Me among the Israelite people, at the waters of Meribath-kadesh, in the wilderness of Zin, by failing to uphold My sanctity among the Israelite people. You shall view the land from a distance, but you shall not enter it–the land that I am giving to the Israelite people.

As your brother Aaron died. The death that he longed for. How did Moses long to die as Aaron [died]? When the Holy One, praised is He, told him, “Take Aaron and his son Eleazar… strip Aaron of his vestments” (Numbers 20:25-26). These are the priestly vestments that he dressed Eleazar in, and so [he did with] the second one [vestment] and the third one. He [God] told him [Aaron], “Enter the cave,” and he entered. “Get up on the bier,” and he got up. “Stretch out your hands,” and he stretched them out. “Close your mouth,” and he closed it. “Shut your eyes,” and he shut them. At that very moment, Moses said, “Happy is one who dies this kind of death!” Thus it says, “As your brother Aaron died,” the death he longed for.

In the Deuteronomy text, God tells Moses to die “as your brother Aaron died on Mount Hor.” The Rabbis seem puzzled by the Hebrew word ka’asher, “as.” They inter­pret it to mean not “You too will die, just as Aaron died, as all people eventually die,” but rather, “You will die as Aaron died, in just the same way, in the manner that Aaron died.”

The Rabbis also may have made a wordplay: ka’asher may have triggered an association with the Hebrew word ashrei, “happy.” The Rabbis saw Aaron’s death as happy — peaceful and serene, one that anyone would long for:

“Moses did as the Lord had commanded. They ascended Mount Hor in the sight of the whole community. Moses stripped Aaron of his vestments and put them on his [Aaron’s] son Eleazar; and Aaron died there on the summit of the mountain” (Numbers 20:27-28).

Thus, the Rabbis say that “as your brother Aaron died”means the death that he, Moses, longed for. The Rabbis wonder: How did Moses long to die as Aaron [died]?

That is, where would Moses have an experience with death that would be a model to him? It was when the Holy One, praised is He, told him, Moses, “Take Aaron and his son Eleazar… Strip Aaron of his vestments.” These are the clothes that Aaron wore when officiating as Kohen, or priest. Moses himself, as leader of the people and God’s appointed representative, was to take his own brother to the top of the mountain, where Aaron would die. He, God, told him, Aaron, “Enter the cave,” and he entered.

The Rabbis assume that Aaron was buried in a cave upon the mountain. This explana­tion helps solve a problem in the biblical text. At the beginning of the section, we are told that “they ascended Mount Hor in the sight of the whole community” (20:27). But then, even though the events take place in plain sight, the Israelite community has no idea that Aaron has died, for the next verse tells us that “when Moses and Eleazar came down from the mountain, the whole community knew that Aaron had breathed his last” (20:28-29). How is it that they know only when Moses and Eleazar came down? The Rabbis solve this inconsistency by interpretation: A burial cave on top of the moun­tain obscured their view….

Moses saw a very peaceful and calm death, as Aaron went through the various steps to prepare for his own demise. At that very moment, Moses said, “Happy is one who dies this kind of death!” Thus it says, “As your brother Aaron died,” the death that he longed for. God, in an act of kindness, allowed Moses to die the same kind of death that his older brother had.

Ashrei means “happy.” “Happy is one who dies this kind of death!” How can death be happy?

There are two ways. First, death can be a “friend” that releases a person from suf­fering. As Tennyson put it, “Sweet is death who puts an end to pain.” Sweet is a death that releases a loved one from torturous suffering, that allows us to remember the strong, active person rather than the tormented skeleton that illness has created.

Death can also be happy because it forces us to face life. Our mortality prevents us from putting off things that have to be done. We must accomplish what we envision in life now because life does not last forever. Death happily pushes us to do what we would otherwise delay, and perhaps avoid altogether.

Thus, death is not necessarily something to be feared. It is not the enemy. We, like Moses, can see death as a friend. Rather than thinking, “If only I could live forever…,” we should say, “I’m happy to live this kind of life, and I’d be happy then to die that kind of death!”

A Yiddish proverb states that “even in dying, you need mazel (luck).”

A woman lies down in bed at night and peacefully passes away in her sleep; another woman suffers for years through cancer, heart disease, and kidney failure before finally succumbing in agony.

One man’s funeral takes place during a ferocious blizzard, and no one but a few immediate family members attend the service; a woman’s funeral is held on a glorious Sunday in the fall and hundreds pack the chapel.

A saintly nun in India who has tended to the poor passes away five days after the sudden death of a glamorous British princess, and a lifetime of good work is almost for­gotten in the media frenzy.

Even in dying, you need mazel.

As Moses approaches the end of his life, he thinks back on his brother Aaron and remarks, “Happy is one who dies that kind of death. How lucky he was: his family by his side, his people there to show their love, and the final moment coming painlessly, with a kiss from God. I wish I had the mazel of such a death.”

The irony is that throughout their lives, it was probably Aaron who was envious of Moses. “I wish I had the mazel of his life,” Aaron may have said to himself on a hun­dred occasions. Aaron was the older brother — yet Moses became the more famous of the two, the one whose name would go down in history: Moses the Liberator, Moses the Law-Giver. People would even question Aaron’s supporting role: “The only reason that he became Kohen Gadol, High Priest, is nepotism! He got the job because of who his brother was!”

Aaron was brought up in slavery; Moses was raised as the son of privi­lege in the house of Pharaoh’s daughter. Aaron was supposed to be the religious author­ity, yet God chose to speak only to Moses. Moses abandoned the people for 40 days, leaving Aaron to deal with the panic and a riot, and then when he returned, Moses blamed Aaron for allowing the construction of the Golden Calf. Moses got to see the Promised Land; Aaron did not. Moses’ children outlived him; Aaron had to bury two of his children, who died tragically.

An individual has very little control over death. It is not in our hands how we die, or when. As the Yiddish proverb reminds us, dying is a matter of luck — or perhaps more correctly, a matter for God. What we do have some control over is how we live. Moses should have learned a lesson from his older brother. Instead of envying Aaron for his death, Moses should have realized, at the end of his life, how fortunate, how lucky, how blessed he had been. The proverb that he should have spoken, that all of us need to keep on our lips, is: “Happy is the one who lived this kind of life!”

Is There Still Midrash Today?

Finding midrash in current events, your local synagogue and your movie theater. 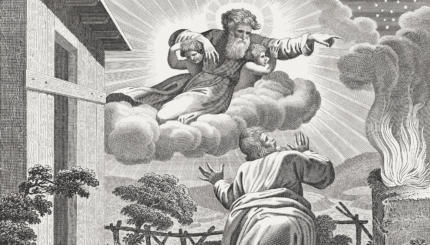