Here’s a dilemma: If a man is obligated to pay both a creditor and his wife’s ketubah, and money is tight, how does he allocate his resources? Should the (ex-)wife and her ketubah take priority? Or the unpaid debt to the creditor? Ameimar reports that Rav Hama taught a system for splitting the difference:

The medieval commentator Rashi explains that the lender had originally lent out money, so is repaid with money, whereas the woman had in some sense “bought” into the household, and so is paid out by the household properties.

That works fine if a man has adequate money and land. But what if he has only enough money to pay out one of these two financial obligations? Ameimar continues:

How is that fair?! The Gemara explains:

We’ve seen this idea in the Gemara before, including just a few pages back on Ketubot 75. According to Ameimar’s logic, women want to be married, so in achieving this desire, the woman has already partially benefited from the financial relationship, whereas the creditor only benefits if he is paid back. Therefore, the money must go to the creditor.

There’s a particular irony in Ameimar’s understanding of who benefits emotionally or financially from marriage. After all, we already learned in Yevamot 65b that while men are obligated in the mitzvah of being fruitful and multiplying, women are not. That means that men needed women to marry them in order to fulfill the mitzvot — whereas women did not need marriage to fulfill their obligations to God.

The Gemara doesn’t delve into this apparent contradiction here, but I think it is worth noting that want and obligation are not quite the same thing. For the rabbis, obligations are mitzvot that God has made incumbent on Jews — either through the Torah, or through the rabbis. Wants, however, are socially conditioned. Sometimes we want things that will genuinely enhance our lives, but sometimes we want things because “everyone has them,” or it’s just what is expected of our community. So for the rabbis, while men are obligated to be married, women want to be married. And that socially conditioned desire has real legal force: If a man has limited resources, the fact that the woman has already achieved part of her want (even though their marriage is now over!) while the creditor has received none of his money back means that his debt takes priority.

But is that really fair? For Rashi, it seems the answer is no. His comment on the creditor’s priority is “this is so only when the contracts (the lending document and the ketubah) were written on the same day, but if her ketubah came first, she collects.”

Rashi insists that a woman’s wants only factor in if the two contracts were originally written at the same time (a condition unlikely to be met), when something is needed to break the tie, as it were. But if her ketubah came first, the question of want is left aside and the man’s obligation to pay out her ketubah takes priority.

Read all of Ketubot 86 on Sefaria.

This piece originally appeared in a My Jewish Learning Daf Yomi email newsletter sent on September 30th, 2022. If you are interested in receiving the newsletter, sign up here. 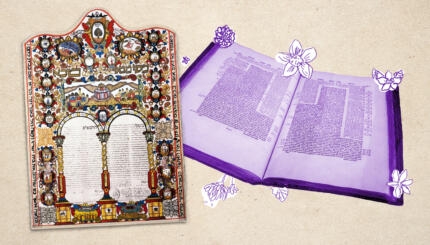 The marriage that wasn't.