Secular Humanistic Judaism is a movement that believes Judaism was created by people to meet human needs and that it is most meaningfully expressed by celebrating human knowledge, power and responsibility. The movement was founded in 1963, when Rabbi Sherwin T. Wine (1928-2007) established the Birmingham Temple in suburban Detroit. A Reform-ordained rabbi, Wine sought to give voice to and create community for those who value Jewish culture, heritage, history, celebrations, wisdom and peoplehood through a human-centered understanding of the world.

Wine believed the movement should focus on what Humanistic Jews do believe, rather than what they don’t. In a collection of essays about his life called A Life of Courage: Sherwin Wine and Humanistic Judaism, he wrote, “At the heart of Humanistic Judaism is a positive answer to the central question of all historic religions and pragmatic philosophies: where do we find the source of power, strength and wisdom to cope with the problems of life? The central focus of humanism is people and the forces of the natural world. We are not Atheistic Judaism. We are Humanistic Judaism.”

Wine’s key innovation was to rework liturgy to focus on human experience and power rather than the divine, allowing Humanistic Jews to “say what we believe and believe what we say.” He retained the benefits of congregational life: a community of like-minded people educating their children, celebrating holidays and lifecycles, and supporting one another through joys and sorrows.

As word of the Birmingham Temple’s approach spread, others were attracted to its message. In 1969 leaders of three Secular Humanistic congregations (including the Birmingham Temple) founded the Society for Humanistic Judaism, to serve as the congregational arm for a movement that saw itself as a fifth denomination (with Orthodoxy and the Conservative, Reform and Reconstructionist movements being the other four).

Today nearly 30 communities affiliate with the Society for Humanistic Judaism in North America, including in Detroit, Chicago, New York, Washington DC, Los Angeles, Toronto and Minneapolis. The International Institute for Secular Humanistic Judaism, which was established in 1985 as the leadership training arm of the movement, has ordained dozens of Secular Humanistic rabbis in the US and in Israel, as well as over 30 “madrikhim” or ritual leaders.

Many controversies in other branches of liberal Judaism are non-issues within Secular Humanistic Judaism. For example, a 1988 resolution on “Who is a Jew” accepted self-determination, stating: “A Jew is a person of Jewish descent or any person who declares himself or herself to be a Jew and who identifies with the history, ethical values, culture, civilization, community, and fate of the Jewish people.” There is no required conversion process in Humanistic Judaism; instead conversion is called “adoption,” as those who want to adopt Judaism are themselves adopted into the Jewish community as one might be adopted into a family.

While interfaith marriage is taboo, or at least discouraged, in some Jewish movements, it has been celebrated in Secular Humanistic Judaism for 50 years, and is sometimes referred to as intercultural marriage because often one or both partners are secular in outlook. The movement maintains no ritual or congregational barriers that preference Jew over non-Jew and is fully inclusive of lesbian, gay, bisexual, transgender and queer individuals. All Secular Humanistic rabbis officiate at weddings and other lifecycle events regardless of the spouses’ religion or gender.

As with all liberal religious movements, Secular Humanistic Judaism in 2017 struggles to recruit and keep congregants. One way it attracts families is through b’nai mitzvah programs that enable innovative, meaningful and personalized coming-of-age experiences. Rather than require a Torah portion commentary by event date, children may choose the particular Jewish reading (from Torah or other Jewish literature) or topic from the Jewish experience to focus on for their mitzvah presentation. A child of an intercultural family may choose a subject at the intersection of their multiple personal heritages. For example, Adat Chaverim Congregation for Humanistic Judaism in Los Angeles offers a Bar Mitzvah Quest, which takes Jewish learning into the high desert for an overnight of wilderness tasks and challenges tied to Jewish wisdom and text.

Studies suggest a potential larger audience for Humanistic Judaism in the future. Most Jews don’t believe in a God that answers personal prayers. In the seminal 2013 Pew Survey of American Jewry, only 34 percent of Jews claimed to believe “with certainty” in God’s existence, compared to 69 percent of all Americans, and over 60 percent of American Jews define their heritage as ancestry and culture rather than religion. The movement’s challenge remains to engage the many Jews who share its worldview but do not yet recognize the benefit of affiliating with a Jewish community. 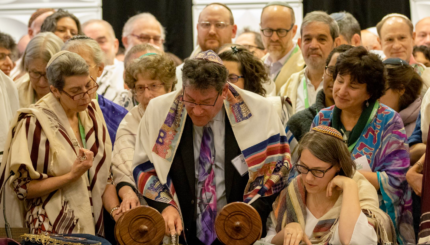 The smallest and youngest of the so-called "big four" American Jewish denominations.

Balancing tradition and innovation in the 21st century