East European Jews had to contend with a religious world radically different from the one they had known across the ocean. In Eastern Europe, Jews understood that for all of the difficulties that they faced, religion defined them; it was an inescapable element of their personhood. They were taxed as Jews and drafted as Jews. Religious affiliation was stamped into their passports and noted on their official documents. When they married or divorced it was done only according to Jewish law, by rabbis authorized by the state.

Indeed, the state recognized Judaism as a legitimate minority faith. Those who sought to observe Jewish laws and customs faced almost no difficulty in doing so, while those who sought to cast off Jewish identity entirely could not do so unless they converted.

The situation in the United States was entirely different. Indeed, what made immigration so dangerous, from the perspective of traditional European Judaism, was that religion in America was a purely private and voluntary affair, totally outside of the state’s purview. Nobody forced Jews to specify their religion; they were taxed and drafted as human beings only. When a Jew married or divorced in America, it was state law, not Jewish law, that governed the procedure; rabbinic involvement was optional.

Indeed, rabbis enjoyed no official status whatsoever in the United States. As a result, Judaism proved easy enough to abandon, but in the absence of state support, difficult to observe scrupulously.

Partly because of this situation, rabbis could provide immigrants with very little guidance in making the transition from old world to new. In fact, very few East European rabbis even immigrated to America in the 1880s and 1890s. Rabbi Moses Weinberger, one of these few, claimed in 1887 that in all of New York City there were no more than "three of four" rabbis with the highest level of ordination, allowing them to issue rabbinic decisions based on Jewish law–this in what was already the largest Jewish community in the world. According to another source, there were but 200 rabbis of any kind (including Reform rabbis) nationwide in 1890–fewer than one for every 2,000 Jews.

"Sheep Without a Shepherd."

From a rabbinic perspective, this was a disaster; one rabbi compared immigrants to "sheep without a shepherd." From the perspective of the immigrant "sheep," however, the absence of rabbinic "shepherds" seemed no more problematic than it was to rabbi-less American Jews of earlier eras. Indeed, the immigrants seem to have taken their newfound freedom in stride, which explains why they failed to pay or treat their all-too-scarce rabbis any better than they did.

In New York City, Rabbi Weinberger reported (based in part on personal experience) that immigrant rabbis found positions "only after a great deal of trouble and effort," and even then they lived "penuriously," their small salaries "barely cover[ingl their basic human needs." He counseled Jews of his type to "stay home."

Rabbi Abba Hayim Levinson’s experience gave credence to this advice. The poor rabbi trudged all the way up to Rochester, New York, in 1883 to offer his services to the city’s East European Orthodox community. Yet, although there was no Orthodox rabbi for miles around, Beth Israel Congregation elected him by only a single vote and then offered him a paltry salary of $150–far less (as offers many another rabbi also learned to his chagrin) than the $400 paid to the same congregation’s cantor.

In part, this mistreatment may be blamed on the fact that East European Jews were not used to paying for rabbis–back home that was the job of the government or of the organized Jewish community. Some immigrants also harbored longstanding grudges against rabbis based on bad experiences with coercive rabbinic authorities in their home countries.

Even those with no personal ax to grind found that the East European model of the rabbinate was difficult to transplant to America. In Eastern Europe, rabbis tended to define their responsibilities communally; they looked to serve all Jews in a particular territory. In America, organized Jewish communities on the European model did not exist and congregationalism ruled supreme; rabbis were expected to meet the needs of the synagogue members who paid their salaries.

Everyone a Rabbi (or No One)

Democracy, America’s entrancing egalitarian ideal, also worked against rabbis’ interests, it undermined the deferential social structure that Jews had one accepted, and it subverted rabbis’ time-honored scholarly prerogatives. Men devoid of learning and piety, even boorish hand laborers who in their native lands would likely have received scant attention, now felt themselves to be the rabbi’s equal. Some went so far as to usurp rabbinic prerogatives, setting themselves up as teachers, preachers, ritual circumcisers, and (until a change in the law made this illegal) marriage officiators.

Precisely for this reason, many a rabbi and scholar described America as an "upside down world" and recoiled from it. Even some rabbis who had come to America prior to 1900, like Rabbi Weinberger himself, later abandoned the rabbinate and went into business.

The upshot was the collapse among immigrants of spiritual life as East European Jews had traditionally known it, parallel to what had happened in the early 19th-century America, when old religious structures gave way in the face of revolutionary changes. Henceforward, latitudinarianism [freedom of opinion on religious matters] reigned supreme in Jewish immigrant circles: Jews could practice their faith as they saw fit, without rabbinic intrusion.

The best evidence of this collapse may be seen in the astonishing number of immigrant Jews who failed to attend synagogue. Numerous surveys between 1900 and 1917 found that the number of "unsynagogued" Jews exceeded the number of "synagogued" ones by a wide margin. "Out of the estimated Jewish population of one million persons, or two hundred thousand families in the United States, four-fifths are ‘unchurched,’" the American Jewish Year Book calculated in 1900. Some of these, of course, were native-born Jews, but the overwhelming majority were not.

Immigrants from the same towns came together for fun and charity. 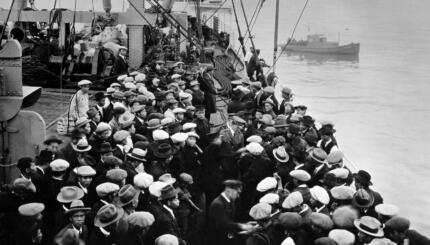