Jewish Music in the Middle Ages

Reprinted with permission from Eli Barnavi’s A Historical Atlas of the Jewish People, published by Schocken Books.

The appearance of the printing press in Europe [in the mid-1500’s] coincided with a major turning point in Jewish history. Two great centers of medieval Jewish culture–in the Iberian Peninsula and in German cities–were wiped out by expulsions. New centers were emerging in their place: in northern Italy, Bohemia, Moravia, and Poland for Ashkenazi Jewry; in central Italy and in commercial cities in western Europe and the Ottoman Empire for Sephardi Jewry.

The printed letter arrived at precisely the right time, as the classification and organization of the enormous literary corpus inherited from the Middle Ages was becoming an urgent task. The medieval canon of texts was primarily based on local traditions; now this was changed and a new canon was created, based on the printed word. Furthermore, the Hebrew printing press increased the Hebrew readership, transforming the composition of the intellectual elite. In short, as in non‑Jewish society, printing caused a major revolution which was social as well as intellectual.

Conceptually, the Hebrew incunabula (“cradle books,” printed in the fifteenth century) still reflected the era of manuscripts. Early books were printed with no title page or pagination, and in small editions. The majority consisted of books needed for daily use, such as prayer books for various rites, collections of religious precepts, Talmud tractates, and biblical commentaries–above all, Rashi’s commentary. The latter, a monumental work by the eleventh‑century erudite scholar from Troyes, became the principal textbook for Torah study throughout the Jewish world, and was printed in at least six editions before 1500.

Hebrew printing shops mushroomed within a very short time. Italy was the earliest and largest center of Hebrew book production, supplying intellectual nourishment to the entire diaspora. Istanbul and Salonika, where refu­gees from Spain established the first Hebrew presses in the Ottoman world, and Prague, Cracow, and Lublin in Ashkenaz, produced works intended mainly for local consumption. In addition to religious hand­books, the printing press in each of these places issued a wide variety of works which reflected the local tastes of the time.

In the first half of the sixteenth century the Venetian presses were those who determined the new canon of Hebrew literature. Most of these were Christian establishments which employed Jews or apostates in the production of Hebrew books. It was their selection which decided the fate of a book–immortalization in print or relegation to oblivion.

It was in sixteenth‑century Venice, therefore, that the classical Jewish library was established. By flooding the market with enormous quantities of low-­priced books (particularly the Pentateuch and prayer books) for the general public, Italian printers secured the capital necessary for the production of expensive editions for which there was less of a demand. The Jewish book market was thus considerably enlarged and its products standardized.

Moreover, this mass production of Hebrew books for daily religious use resulted in a social transformation similar to that which was accomplished in Christian society by the translation of the Bible into vernacular languages: it made the Scriptures accessible to all, enabled everyone to understand the prayers and follow the reading of the Torah in the synagogue, thus becoming an active participant. For the middle and lower classes, this constituted a veritable revolution.

In the second half of the seventeenth century, the center of Jewish printing moved to northwestern Europe in accordance with the general European economy. Amsterdam, a commercial metropolis and a meeting place for Sephardi and Ashkenazi Jewry, replaced Venice as the major center of Hebrew printing. But soon other centers began to emerge in Germany: in Frankfort on the Oder, Frankfort on the Main, Berlin, Hamburg, and other cities. The decline of the printing industry in eastern Europe caused by the Thirty Years’ War and the massacres of 1648‑1649 brought experienced workers to these new establishments as well as many a Jewish author in search of a publisher.

In the west as in the east, printing in the seventeenth and eighteenth centuries was less important to the literary elite who had done quite well in the era of the manuscript, than to the second‑rank intelligentsia. Itinerant preachers, half‑learned teachers, and pen‑pushers of all kinds, were intoxicated by the printing revolution. The massive output of works composed by men who despite modest intellectual abilities, were enthusiastic, imaginative, and creative, gave birth to new literary genres which radically trans­formed Jewish culture.

This article is reprinted with permission from

A Historical Atlas of the Jewish People

edited by Eli Barnavi and published by Schocken Books. © 1992 by Hachette Litterature..

Kabbalah: Origins of a Spiritual Adventure

The history of Kabbalah in Medieval Spain. 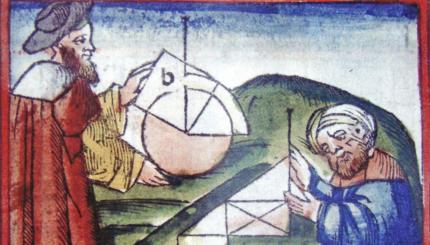 The Karaites: A Medieval Jewish Sect

The Karaites, biblical fundamentalists, challenged the authority of rabbinic Judaism.