After the loss of six million during the Shoah [Holocaust], the world Jewish population was estimated at 11 million in 1945. It took about 13 years to add one million Jews to the post-Shoah total, but the next 45 years were not enough to add a second million: World Jewry was estimated at 12,948,000 in 2003. Zero population growth reflects mostly negative balances between Jewish births and Jewish deaths, and between accessions to and secessions from Judaism. Low “effectively Jewish” birthrates also reflect widespread out-marriages and low propensities to identify the majority of the respective children as Jews.

In Israel, Jews have constituted a solid majority of the total population since 1948, while Jews in other countries constituted small minorities in their respective environments. Israel’s Jewish population steadily increased from approximately half a million in 1945 and one million in 1950 to over 5.1 million in 2003.

International migration reshaped the geographical map of world Jewry and fundamentally changed the environments in which Jewish life developed. Since 1945 over five million Jews and their non-Jewish family members have moved between countries and continents. Jewish migration’s wavelike pattern has  reflected predominant crisis or push-dominated determinants.

Two major migration waves occurred in the wake of Israel’s independence, between May 1948 and 1951, and since the end of 1989, with the great exodus from the former Soviet Union (FSU). Jews massively moved out of countries where they  had been long discriminated against, to societies offering political freedom and socioeconomic opportunities.

The Middle East, North Africa, Ethiopia, the FSU, and other parts of Eastern Europe and the Balkans witnessed most of their Jews emigrating. Large numbers of Jews also left Latin America and South Africa, and to a lesser extent the United Kingdom and other European countries. Major recipients of Jewish migration–besides Israel–were the United States, France, Canada, Australia, and more recently Germany.

The overall effect of these changes was a significant concentration and correlation of the Jewish presence with major indicators of national socioeconomic development and life quality. Israel itself–beyond the unique cultural-ideological effects of Zionism–rose during the second half of the 20th century from a small and quite underdeveloped country to a stable and competitive geopolitical and economic presence internationally. In 2003, 44 percent of world Jewry lived in the United States and Canada, 39 percent in Israel, and 17 percent in other countries.

While the family long functioned as the cornerstone of Jewish society, over the past decades sweeping changes occurred in the conventional roles of marriage and procreation. For example, low birthrates in the Diaspora and the erosive effects of out-marriage on the Jewish identity of children produce remarkably older age compositions.

Continuation of these trends in the foreseeable future may lead to continuing Jewish population growth in Israel and a decrease in the rest of world Jewry. By the end of the current decade, Israel might comprise for the first time more Jews than the United States. Already, a majority of all Jewish school-age children globally live in Israel. By the end of the third decade of the 21st century, Israel might comprise an absolute majority of world Jewry.

Facing the rapid growth of world population, the share of Jews is bound to diminish in each major area of the world, including Israel. The implicit weakening of the Jewish presence on the global scene calls for careful consideration of the deeper causes of current trends, and for concerted efforts to moderate or reverse their consequences.

While, over the past decades, Jews have been exposed and have responded to major social changes in globalization trends, the Jewish future depends on the ability and willingness to develop a meaningful sense of belonging among the younger generation. Jewish demography cannot be reduced to pure biology, as its major thrust rests on transmitted values and education.

Facing these trends and prospects, two quite different sets of issues stand at the center of the Jewish agenda. In most Diaspora communities, the challenge is how to preserve the sense of a cohesive and meaningful Jewish community while enjoying the whole gamut of creative opportunities offered by open and non-hostile societies. From a demographic point of view, those who wish to be part of the Jewish way of life should be persuaded that a cultural collectivity cannot survive in the long term without the biological foundations of family and children.

A related challenge is how to pierce the surface and reach inside those who do not bother nor want to belong, in order to revive in them a spark of historical memory and mutual responsibility, if not a sense of pride and mission. The main challenge in Israel is how a clear Jewish population majority can be preserved. Differential growth rates, ethno-religious population composition, and territorial configurations need to be considered when trying to solve the ongoing Israeli-Palestinian conflict. Interconnections among security, the economy, the demography of international migration and family patterns, and brave political decision-making will determine whether the nature of Israel as a Jewish and democratic state can be maintained and transmitted.

The solutions provided to these challenges will certainly influence the world’s outlook on the Jews in the 21st century. 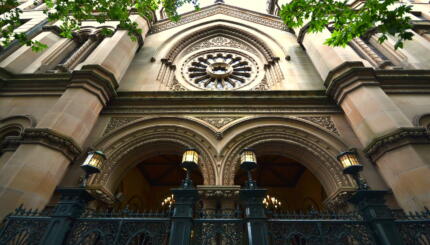 Who Are the Jews of Australia?

The first Jews arrived in Sydney in 1788 and have been joined by successive waves of Jewish immigrants ever since.