Jewish Women After the Haskalah

The Book of Genesis taught the rabbis the ideals of family life. It began by introducing monogamy as the ideal of the Garden of Eden and then accepted polygamy as a compromise, illustrating the difficulties entailed with examples from the lives of the patriarchs.

The legal codes of the Torah provided for marriage and divorce and required the marriage bond as a prerequisite for sexual relations. The ancient customs of dowry and bride‑price, as well as the procedures for entering into the marital union, were already changing in the fifth century B.C.E., as is known from the documents of the Jewish military colony at Elephantine. By the time of the tannaim [rabbinic sages of the first two centuries CE] they had been turned into a set of provisions, contractual and financial, for securing the welfare of the wife and children in the event of the death of the husband or a divorce.

These developments went hand in hand with other evidence of the rising status of women, an amelioration that clearly resulted from the influence of the biblical tradition, as can be seen when biblical laws regarding women and marriage are compared to their ancient Near-Eastern counterparts.

By tannaitic times, marriage was entered into by a procedure which had to be formally witnessed. Women had to be provided with marriage contracts for their protection, and some tannaim regarded the provisions of such contracts as binding even when the document could not be produced or had not been executed. Marriage could be entered into either by the giving of a sum of money (usually in the form of a ring), the giving of a written declaration (distinct from the marriagecontract), or consum­mating the marriage forthe purpose of entering into a permanent bond.

Marriage was dissolved either by the death of one spouse or by divorce. Although the Torah specified that a divorce was to be initiated by the husband, the amoraim [rabbinic sages in the third through fifth centuries] developed methods for bringing about a divorce at the wife’s request under certain circumstances.

Moreover, divorce was made easier in several ways in cases where ending the marriage was in the wife’s interest. At the same time, the rabbis continued to take the view that women were always better off married than single, which certainly was so in the society in which they lived. While the amoraim ruled that divorce could take place for any reason, not only for adultery, they saw the failure of a marriage as a personal and even cosmic tragedy, for the marital relationship symbolized the covenant between God and Israel.

The ultimate purpose of marriage was to carry out the com­mandment to procreate. The tannaim disagreed about the limits of this commandment, but the amoraim decided in favor of the Hillelite view that two children, one boy and one girl, satisfied the requirement for the man. This commandment, curiously, was not seen as obligatory on women.

Several halakhic [legal] and aggadic [narrative] passages are designed to inculcate an approach to the raising of children and their training in the commandments. Many of the beautiful stories preserved in the aggadah may have been intended for children, a role these tales still play in contemporary Jewish life. [Aggadah refers to sections in the Talmud and midrash that do not constitute Jewish law (halakhah), including, for example, stories, popular anecdotes and biblical expositions.]

To the amoraim, the concept of marriage was one of comple­tion. Through marriage each partner was to be fulfilled. Among the rabbis themselves, polygamy was virtually unknown. In­deed, the economic conditions of the times, including the process of urbanization, which was marked in this period, led increas­ingly toward monogamy.

Various talmudic and midrashic passages lead us to believe that the family unit was the basic context in which the continuity of Judaism was ensured. For example, the father is obligated to teach his son Torah; he can employ others to do this for him, but the responsibility remains his nonetheless. The mother was expected to teach her daughter about the laws of kashrut [concerning dietary laws]and the observance of family purity [involving abstinence from sexual intercourse during a woman’s menstrual period and related practices].

Children could expect to grow up in close proximity to grandparents and other members of the extended family, and to maintain permanent and harmonious relationships with their brothers and sisters. The family was the center from which all other aspects of community and peoplehood emanated.

This article is reprinted with permission from From Text to Tradition: A History of Second Temple and Rabbinic Judaism (Ktav).

Two main social structures competed in ancient Israel. The people were united under the monarchy, which organized the state for administrative and taxation purposes. At the same time, the Israelites held fast to their tribal associations.

Husbands, wives, and relationships in Judaism are governed by the principle that "It is not good for the human to be alone." 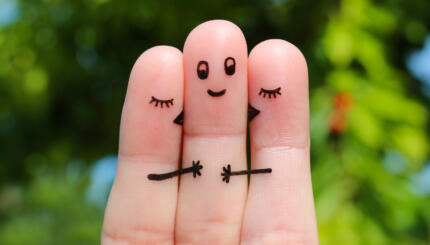 Once a tolerated and regulated practice, polygamy is virtually unheard of in Jewish life today.