The following article makes the political personal by examining the effect of the 1492 edict of expulsion on the Spanish Jewish community. Reprinted with permission from The Jews of Spain (Free Press).

Selling Out in a Hurry

The decree of expulsion was greeted by the Jews with despair and disbelief. They were given four months to wind up their affairs, and were not permitted to take any gold, silver, or precious metal with them. Recognizing that they could not avoid a forced journey into the unknown, they sought frantically to divest themselves of their property, but the task was virtually hopeless in the time allotted.

The accumulated communal treasures of generations included exquisite synagogues and ancient cemeteries, ritual baths and halls. As for private buildings, how could they sell quickly so many villas and vineyards, orchards and grain fields? The market was flooded still more by workshops and ateliers, thousands of homes and unremitted debts.

The contemporary priest, Andres Bernaldez, describes how most possessions went for a pittance: a vineyard for the price of a handkerchief, a house for a donkey, a workshop for a piece of linen or a loaf of bread. Some people buried their valuables in the hope that they would return later. Agonized scholars dispersed family libraries that had been preserved for generations, even as they tried to commit some of this treasured wisdom to memory.

The author of their distress, Ferdinand, coldly calculated how much he could reap from the decree. For one thing, he cynically ordered Jewish communities to pay the communal taxes due for the next several years so that he would not lose revenue by their departure. Debts outstanding to Jews were deferred or transferred to the crown.

Where Do You Go?

To ensure that their children would have extra protectors during the upcoming ordeal, many families hurriedly married them off. The major problem, however, was finding a country of asylum. England and France had banished their Jewish communities in the thirteenth and fourteenth centuries. After the Black Death of 1348, which wiped out almost a fifth of Europe’s population, many German towns had expelled Jews or destroyed their communities, accusing them of causing the deaths by poisoning the wells.

Almost all of Italy had refused to admit the Spanish refugees, while the few existing Jewish communities there could not handle much immigration in the face of restrictions placed upon them. North Africa was a possibility, but he hapless Sephardim had to bribe ruthless ship captains and rely upon unsafe vessels; in the event, many refugees wound up adrift on the Mediterranean.

The exodus began in the first week of July. The majority of Jews from Castile, numbering about 120,000, set off for neighboring Portugal, where, for a hefty fee, King John II granted them a temporary entrance permit good for eight months. Those who were unable to pay for the entrance permit were forthwith sold into slavery. At the end of the period of asylum, 600 families of affluent Jews would be permitted to remain, at a cost of 100 cruzados per household, along with a certain number of skilled craftsmen and artisans.

The king at first agreed to provide ships to take the rest of the community elsewhere. Much more promising, in the short run, was the reaction of the independent kingdom of Navarre, which refused to be persuaded by the enemies of the Jews to bar their immigration. Several thousand Sephardim sought sanctuary there and set up their own communities of “foreigners” and “newcomers” alongside the original Jewish inhabitants. Unfortunately, the expelled Jews would not long find peace in either Portugal or Navarre, for in both kingdoms they were forcibly converted to Christianity within a few years.

Portuguese Cruelty and Risks of Transit

[The circumstances in Portugal were notably cruel. Having changed his mind about sponsoring passage for the Jews, King John II gave them the choice to convert or be sold into slavery. He arrested children of Jews who refused to convert and sent these children to the Portuguese island of Sao Tome, where, a Portuguese Jewish chronicler reports, almost all were swallowed up by huge lizards and the remainder died of starvation.

John’s death in 1495 brought temporary relief to the Jewish community in Portugal. Manuel, his successor, freed the enslaved Jews but decided, upon his marriage to Ferdinand and Isabella’s daughter, to expel the Jews in 1496. Manuel ordered that the Jews could only depart from the port at Lisbon, on a certain day in 1497. When the Jews arrived in Lisbon on the appointed day, they were met not with boats but with priests who baptized the Jews en masse.]

Perhaps as many as 20,000 Andalusian Jews flocked to the port of Cadiz en route to North Africa, but there is no way of knowing how many actually succeeded in crossing the Mediterranean safely. This route was especially hazardous, according to testimonies from North African communities, because of the piracy endemic to the area. Further risks included a new outbreak of the plague, along with the closing of Muslim coastal cities to the infected wanderers. 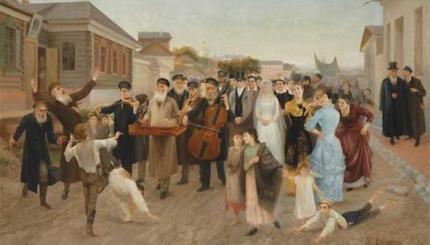 The accumulation of disasters in the Middle Ages--expulsions, crusades, and the Black Death, to name a few--inspired a steady stream of Jewish immigration to the Holy Land.