Do You Wear a Tallit on Rosh Hashanah?

Rosh Hashanah is largely indistinct from Shabbat and other major Jewish festivals in terms of the activities that are prohibited by traditional law. Indeed, the language used in the Torah to describe the prohibitions on Rosh Hashanah are very similar to those used to describe the prohibition to work on Shabbat. The Bible declares in Leviticus 23:24 that Rosh Hashanah should be a shabbaton on which no work should be performed, language much akin to the way the Torah describes Shabbat prohibitions in Leviticus 23:3.

There are, however, some important distinctions.

Can you cook on Rosh Hashanah?

Yes. Cooking is the principal difference between traditional Shabbat observance and Rosh Hashanah, though there are still some limitations. Most Orthodox authorities permit one to adjust the flame on a stove, but not to light a stove from scratch. Lighting a flame from an existing flame is allowed, which is why many traditional Jews will keep a 24-hour yahrtzeit candle burning in their home over Rosh Hashanah. In addition, most authorities maintain that if a particular food could be prepared prior to Rosh Hashanah, it should be. Finally, the food should be cooked on the holiday only if it is intended to be consumed on the holiday itself. It’s not considered proper to cook food on Rosh Hashanah that will be consumed after the holiday.

Can you drive on Rosh Hashanah?

Can you work on Rosh Hashanah?

As with Shabbat, the Torah explicitly forbids work on Rosh Hashanah, as on other major Jewish festivals. Among modern Jews, practices vary. In Orthodox communities, refraining from work on both days of Rosh Hashanah is considered the norm. Among more liberal Jews, some will refrain from work only on the first day.

Can you carry on Rosh Hashanah?

On Shabbat, traditional Jewish law prohibits carrying items outside the home. But on Rosh Hashanah, carrying is permitted, provided the item is required for the holiday. So carrying one’s tallit to synagogue, pushing a baby in a stroller or taking food to a neighbor’s home for a holiday meal are all allowed, but carrying a radio would still be forbidden. 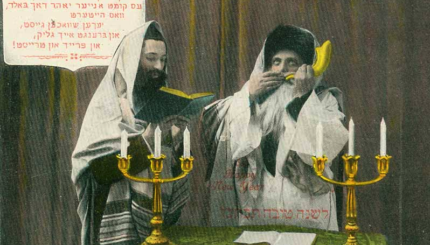 Jews have been sending New Years' greetings by mail for centuries.

When is Rosh Hashanah this year?