Reprinted with permission from The Norman Lear Center  at the USC Annenberg School for Communication & Journalism.

As far as Jews are concerned, intermarriage has been the predominant theme of the 1990s. The trend toward mixed couplings of Jews on TV sets Jewish romance apart from those of many other racial and ethnic groups.

So pervasive has been intermarriage and interdating on television that it has been virtually impossible to find a Jewish couple anywhere on the screen. When the intermarriage rate in the population at large hovers around 50 percent, on television it is well over 95 percent, and growing. While most interfaith marriages or romances have been between Jewish men and non-Jewish women, two reverse couplings occurred during the 1997-98 season.

Mad About You featured
an intermarried couple.

On CBS’s The Nanny, Fran Fine finally trapped her man, her blueblood employer, Mr. Sheffield, while over on ABC, the dippy Dharma Finkelstein married preppy WASP lawyer Gregory Montogomery. These plots may indicate that Jewish women now have the same right to marry non-Jews as do Jewish men, but they do not signal a triumph for the Jewish family.

Only rarely is a specifically Jewish woman portrayed romantically on TV shows, as for example the character Elaine, the former girlfriend of Dr. Joel Fleischman on Northern Exposure, who appears in one episode merely to free Fleischman from the constraints of his New York past.

In a few Seinfeld episodes, Jerry dated an observant Jewish woman named Rachel whom Jerry’s friend George tricks into unknowingly eating lobster. Examples of Jewish-Jewish romances are also infrequent, although there are a few older married couples (the parents of Paul Buchman in Mad About You, or Seinfeld’s parents, or the Costanzas, as hidden Jews) whose portrayal does not suggest much joy in their unions. What in fact would happen if Jewish men and women would become each other’s love interest, asks one critic. “Would the television explode in fireworks of obsession, compulsion and sharp conversation?”

Critics have given a variety of reasons for the current focus on intermarriage. First, shows that are “too Jewish” and, by extension, families that are “too Jewish” will have limited audience appeal-think Brooklyn Bridge. “What better way to provide cover for a character’s Jewishness,” writes one observer, “than to give him a non-Jewish mate?”

Second, the demography of TV Jews reflects the marriage patterns of the largely Jewish male group of producers, writers, and directors who develop these shows. Third, cultural clash and conflict, like that between Jews and non-Jewish spouses and lovers, create tension and heighten viewer interest. Television intermarriages thus become convenient-some say essential-plot devices that focus useful attention on the divisions and conflicts inherent in all marriages, not solely those based on religious background.

In their detailed analysis of intermarriage on television, Jonathan and Judith Pearl observe that the history of interfaith couplings on TV reflects diverse attitudes-“both vehemence against and praise for it”; almost always, however, intermarriage is presented “within a Jewish framework” and as a problematic issue that must be dealt with. They cite several dramatic shows, e.g., thirtysomething, in which an intermarried Jewish character begins to explore his religious identity, particularly after the birth of a child, often ending in a “kind of return to Judaism.” Sometimes, conversion of the non-Jewish partner is an option.

The Pearls see the prevalence of interfaith couples on TV as a mirror of the social milieu, and conclude “that intermarriage as it appears on television is not negative in and of itself, given its widespread existence in reality.” Indeed, they feel that the many TV presentations of the issue have become “a dynamic part of the ongoing debate on this vital issue.”

Despite this positive effect, because the rate of television intermarriage is nearly double that of real life intermarriage, the cumulative effect of such portrayals is more dramatic, and damaging, than may first appear. Television shows need not replicate the exact demographic, economic, and social patterns of the real world; nevertheless, the medium forecloses creative options by making intermarriage ubiquitous.

Because it is almost impossible to find any love relationship between young Jews, both men and women absorb negative messages about each other’s attractiveness and appeal. Moreover, while the dramatic shows that the Pearls cite might offer a hopeful vision by provoking characters to reconsider their Jewish identity, the same is not generally true of sitcoms, where there has usually been little consideration of the impact of the intermarriage on the Jewish partner’s religious or cultural identity.

There are some indications that the formulaic plot of interdating and intermarriage is expanding into new directions. Examples include the final episode of The Nanny in the spring of 1998, when Fran finally married her employer in a wedding conducted by a rabbi and minister and replete with Jewish customs; a Christmas episode of Frasier where the non-Jewish lead character dates an attractive, intelligent Jewish woman, Faye Moskowitz (Amy Brenneman), whose quarrel with her mother points to the underlying strength of Jewish mother-daughter bonds; and an episode of Dharma & Greg the same season that depicted a multicultural bris-with rabbi, minister, and Native American shaman.

But cliched intermarriage shows continue to be introduced- a recent but fortunately short-lived one was You’re the One, a Warner Brothers sitcom about a newly engaged couple consisting of a young woman from an ultraconservative Southern family whose fiancé is a Jewish man from a liberal background. And while the Kathy Griffin character, Vicki, on Suddenly Susan, seemed to be a “historic breakthrough,” in the view of one observer, since Vicki began to explore, and deepen, her own Jewish identity after her romance with and marriage to a rabbi on the show, the possibility of an enduring prime-time relationship between two vital Jews was dashed with the TV rabbi’s fatal heart attack.

When religion is brought up on television, Judaism is more often than not portrayed in a negative light. 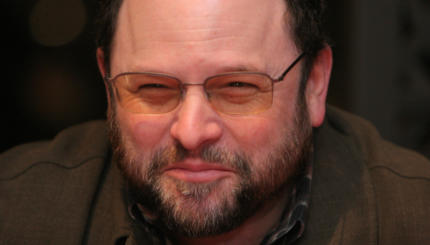