This week’s portion, Parashat Vayeilech, finds Moses and the Israelites preparing for the conquest of Canaan. Regarding the inhabitants of that land, Moses says that God is going to “wipe out those nations from your path and you shall dispossess them” (Deuteronomy 31:3).

Kind of makes you squirm, doesn’t it? Deuteronomy is loaded with similar passages that most of us find irreconcilable with the Torah’s more inspiring commandments. According to Deuteronomy, the Israelites were to “proscribe” the seven Canaanite nations (Deut. 20:17), “doom them to destruction, grant them no terms, and give them no quarter” (Deut. 7:2), as well as “tear down their altars, smash their pillars…and consign their images to the fire.” (Deut. 7:5)

Let’s face it: We wish the Bible weren’t so violent. Of course, there is more to the story than meets the eye. In this very same portion, God tells Moses about the apostasy of future generations of Israelites, and how they will, indeed, “go astray after the alien gods in their midst” (Deut. 31:16).

But how can there be “alien gods in the Israelites’ midst,” how can they “turn to other gods and serve them” (Deut. 31:20) if they’ve destroyed them all? How can the Israelites be led astray by Canaanites if all the Canaanites have been annihilated? The answer sheds light on this very troubling element of the Torah.

When Deuteronomy Was Written

The date of the Israelite “conquest” of the land is generally thought to be 1250 B.C.E. The Book of Deuteronomy is written as though it is a recording of events that occurred on the eve of this conquest. Most scholars, however, believe that Deuteronomy was composed during the reign of Josiah, around 621 B.C.E. In other words, the “Deuteronomist” is telling a story that is already ancient history. The version of the settlement told by the Deuteronomist reflects the issues and concerns of the time of Josiah far more than it does the time of Moses some six centuries earlier.

By the time of Josiah, there were no longer any Canaanite nations. The seven nations that the Deuteronomist urges the Israelites to dispossess had long since ceased to exist, and the commandment to destroy them was by then purely hypothetical. The Deuteronomist’s real concern is idolatry, not Canaanites.

Josiah was king during a period of national renaissance for the kingdom of Judah. The power of the Assyrian Empire was in decline. Forced to defend itself against the emerging Babylonian Empire, Assyria’s grasp on Judah weakened. As a result, Judah broke free from Assyrian domination and reasserted its national and religious independence.

One of Josiah’s primary concerns was to strengthen the national identity of Judah, which meant ridding it of Assyrian influences. The Israelites needed to be urged to cast off the vestiges of foreign domination, particularly that of the idol worship that was prevalent after a century of vassalage to the Assyrians.

Thus the portrait of the conquest of Canaan emerges in Deuteronomy. The military threat of the Canaanite nations as portrayed by the Deuteronomist is insignificant compared to the threat of idolatry. If we had gotten rid of idolatry when we first settled here 600 years ago, the author seems to say, then we wouldn’t be struggling with it now.

The Deuteronomist makes a case for the campaign against idolatry in his own time. But that case is projected back to the time of Moses, to a sacred moment in history. Rather than being viewed as a mandate for the annihilation of indigenous peoples, Deuteronomy is best understood as a critique of the idolatrous habits of Jews in a much later age.

Although this explanation doesn’t make these passages any more pleasant to read, it does help us to see them in historical context and, perhaps, lead us to ponder whether the task urged upon us by the Deuteronomist has not yet been accomplished. 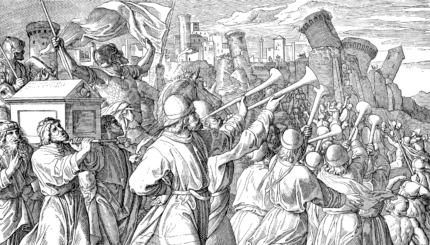 Joshua and Judges present different versions of the Israelite conquest.

The festival served as a repudiation of idolatry.