This haftarah is read by synagogues that celebrate Shemini Atzeret and Simchat Torah on separate days. The relationship of the haftarah to the holiday is made evident in the very last verse with its reference to the “eighth day.”

8:54.         When Solomon finished offering to the LORD all this prayer and supplication, he rose from where he had been kneeling, in front of the altar of the LORD, his hands spread out toward heaven.

8:56.         “Praised be the LORD who has granted a haven to His people Israel, just as He promised; not a single word has failed of all the gracious promises that He made through His servant Moses.

8:58.         May He incline our hearts to Him, that we may walk in all His ways and keep the commandments, the laws, and the rules, which He enjoined upon our fathers.

8:59.         And may these words of mine, which I have offered in supplication before the LORD, be close to the LORD our God day and night, that He may provide for His servant and for His people Israel, according to each day’s needs —

8:65.         So Solomon and all Israel with him  — a great assemblage, [coming] from Lebohamath to the Wadi of Egypt  — observed the Feast at that time before the LORD our God, seven days and again seven days, fourteen days in all.

8:66.         On the eight day he let the people go. They bade the king good-bye and went to their homes, joyful and glad of heart over all the goodness that the LORD had shown to His servant David and His people Israel.

A connection between Sukkot and this "eighth day of assembly." 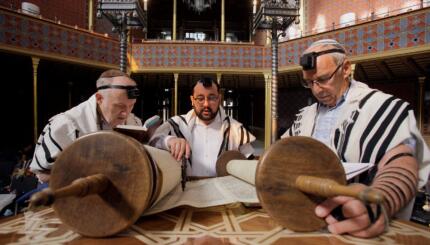 How to Have an Aliyah

What you should know before you're called to the Torah.