Ladino, also known as Judeo-Spanish, was, from the Spanish Inquisition until World War II, the primary language spoken by thousands and thousands of Jews throughout the Mediterranean.

It is essentially 15th-century Spanish, with words mixed in from Portuguese, French, Italian, Arabic, Greek, Turkish and Hebrew — and it is rich with music, poetry, proverbs, folktales and more. Learn more about Ladino here.

While Ladino no longer is spoken anywhere as a first language and estimates put speakers with Ladino familiarity at just 200,0000 worldwide, there are a surprising number of resources available today for people committed to learning this language.

I have used many of these resources first-hand, as I did not grow up speaking the language, myself. Here are some places to begin!

Notes Before You Get Started

Course in Judeo-Spanish for Beginners by Matilda Koén-Sarano – You might have to search a library for this one, but if you can get your hands on it, it’s well worth it! In addition to this workbook, Koén-Sarano, one of the greatest Ladino writers today, has written several books of Ladino poetry and stories that are essential reading for studying the language. Her book, Ritmo antiko, poezías i kantigas, is one of my favorites.

Italki – One-on-one lessons via videoconference with a private Ladino teacher. ($30 per hour)

Kurso de Ladino (for Hebrew speakers): Thirty-seven Ladino video lessons put out by the Autoridad Nasionala del Ladino i su Kultura, Israel’s leading body for Ladino preservation. The content is in Ladino, but some of the spoken introductions and written descriptions are in Hebrew. (Free)

uTalk – Learn more than 2,500 Ladino words and phrases from recordings of native Ladino speakers on this game-based app which works on smartphones, tablets and computers. uTalk Ladino can also be used by speakers of 100+ languages — including English — as the app automatically defaults to the language of your device. My Jewish Learning readers can receive a 50% discount at this link.

This is under the auspices of the American Sephardi Federation (ASF) at the Center for Jewish History, in New York City. This is one of the largest publicly accessible libraries and archives of Sephardic and Ladino interest in the Western Hemisphere. It contains books, documents, photographs, films and more.

This searchable collection at the University of Washington, Seattle, showcases one of the most comprehensive efforts to digitize all Ladino written materials — including novels, prayer books, Bibles, manuscripts and letters — and make them publicly available. It focuses on documents produced by Sephardic Jews between the 17th and mid-20th centuries, with a particular emphasis on materials in Ladino. There is also an audio collection.

La Famiya Mozotros by Irvin Mandel is a book of illustrated cartoons in Ladino that reflect a humorous look at Sephardic life in Turkey today.

Ora de Despertar (Time to Wake Up) is a bilingual Ladino/English illustrated children’s book written by me (Sarah Aroeste) and illustrated by Miriam Ross that walks through morning gratitude rituals.

Nono’s Kisses for Sephardic Children by Flori Senor Rosenthal is a compilation of easy phrases in Ladino to discuss with children.

El Kurtijo Enkantado by Matilda Koen-Sarano is a collection of Ladino short stories and folktales.

Ora de Despertar (Time to Wake Up!)– is an animated musical cartoon collection developed by me, Sarah Aroeste, with easy-to-learn words teaching the elementals of Ladino. While it is intended for young children, it is also helpful for adults to be able to connect easy vocabulary and concepts with dynamic visuals. Watch the first episode below:

There are far too many beautiful Ladino singers to list here! iTunes, Spotify and all major music outlets have Sephardic playlists filled with Ladino music to explore. Classic singers and albums, if you can get a hold of their hard-copy CDs, will almost always have lyrics and translations included. I am listing here popular Ladino songbooks that have accompanying music CDs, which is a convenient way to learn the music and language at the same time:

Ramon Tasat : Sephardic Songs for All

The three motion pictures below are (at least partly) in Ladino, with subtitles.

Starring none other than Tom Hanks, this film is about a gentile American in the Royal Air Force who is recuperating in Jerusalem after his bomber gets shot down during World War II. There he falls in love with a Sephardic girl and must navigate the cultural (and linguistic) differences with her Ladino-speaking family.

Nominated for the Academy Award for Best Foreign Language Film, this movie tells the story of a Sephardic family from Egypt that settles in Tel Aviv in 1947. It is a vivid description of the lives of Sephardic immigrant families on the eve of the establishment of the state of Israel.

This winner of the Special Jury Prize at Cannes takes place in 1943 when a train carrying Greek Jews is headed for Auschwitz and stops in a small town in southwest Bulgaria. A love affair between a Nazi soldier and a Jewish girl ensues. 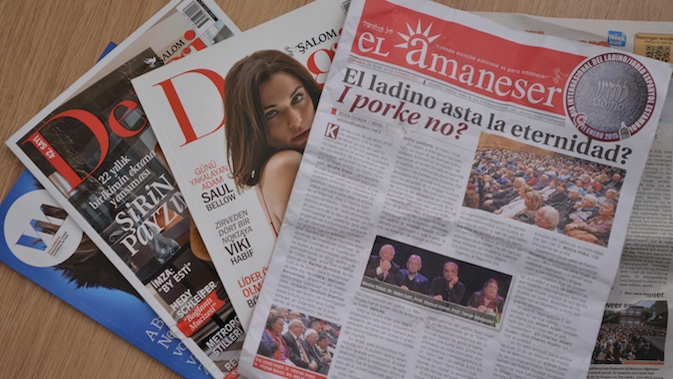 A monthly Ladino newspaper put out by the Ottoman-Turkish Sephardic Cultural Research Center, an organization for everything relating to Turkey’s Jewish communities.

This Turkish Jewish newspaper has its own section in Ladino.

A news website about the Sephardic world, mostly in Spanish and Ladino.

This weekly newsletter of the Sephardic Brotherhood, an umbrella group based in the United States that provides resources and cultural services for Sephardic Jews, publishes pieces of interest to the Sephardic world. Much is in English, but there are several sections in Ladino highlighting proverbs and folktales each week.

All of the stations below can be streamed directly from their websites.

This Ladino music and story program is geared toward Hebrew speakers.

This Spanish station has a Ladino broadcast, Emisión en sefardí.

This Israeli station has a daily Ladino newscast, Kan Ladino.

Ladino is currently being taught at several universities in different styles (classes, seminars or student clubs). You might be able to audit and sit in on a class if it’s in a city near you! Here are a few for starters: University of Washington, Seattle, University of Pennsylvania, Binghamton University, UCLA, and all major universities in Israel.

A Yahoo group correspondence circle exclusively in Ladino, with speakers from around the globe. The site also includes a working Turkish-English-Castilian-Ladino dictionary that you can find here. You could spend days exploring this site!

A popular Yahoo forum where members communicate only in Ladino.

has several groups that are intended to be exclusively in Ladino, including Friends of Ladino (Hebrew/Ladino), Geon Sefarad (Ladino in Latin script) and Klub de elevos de Ladino Djudeo-Espanyol. There are many others if you search!

What better way to practice Ladino than to seek out native Ladino speakers to chat with! This group meets in the Washington, DC area over food and stories. Other informal groups can be found in Boston, Seattle and other large cities.

Congregations like Congregation Shearith Israel (the Spanish Portuguese Synagogue) in New York, or any of the Sephardic synagogues listed here (in Seattle, Florida, Atlanta, Indianapolis and more) offer resources and sometimes Ladino classes. They can also connect to you to native Ladino speakers in their community who might be willing to sit and talk with you!

Reushita buena ke tengas! May you have much success!