The Land of Israel Under Roman Rule

In the process of the consolidation of Roman rule in Palestine, the ostentatious and cruel reign of Herod was in every respect a period of transition. It enabled the transformation from the rule of the Hasmonean vassal kings to the imposition (following the short reign of Archelaus, Herod’s son) of direct Roman administration and the creation of the province Judea.

The Herodian monarchy accomplished a political and social revolu­tion which was no less dramatic than the great changes effected by the Hasmoneans. A descendant of an Idumean family which had converted to Judaism only two generations earlier, Herod was forced to seek supporters among social groups which were not associated with the Hasmonean dynasty. [“Idumea” was the Greek name for the region extending from the Northern Negev to the coastal plain.]

For this reason, he recalled from the diaspora several distinguished priestly families such as the Phabi, Kathros, and Boethus. These men had not taken part in the upheavals during Herod’s struggle for power, and, coming from the Hellenistic diaspora, they were nurtured, ­like Herod himself, on Greco‑Roman culture. The king was obviously  attempting to replace the Hasmonean aristocracy with one of his own, relying upon the Jewish communities in the Parthian East and the Roman West. It was therefore not surprising that, during his reign, a great Babylonian scholar suchas Hillel the Elder rose to prominence among the Pharisees of Jerusalem.

Herod had two important attributes: absolute loyalty to Rome, and political prowess, which he exercised with extraordinary brutality by extirpating all signs of opposition, even within his own family. He did not hesitate to execute several of his own sons whom he suspected of plotting against him, as well as his favorite wife, the Hasmonean Mariamne (or Miriam). This earned him the saying attributed to Augustus: “It is better to be Herod’s pig than his son.”

On the other hand, Herod knew well enough how to curry favor with his masters. He worked hard at cultivating relations with Augustus and with Agrippa, the Roman governor of the eastern provinces and Augustus’ designated heir. The two wings of his grand palace in Jerusalem were named Agtippium and Caesarium. In fact, Herod did everything he could to be included in the intricate struggle which led to the establishment and consolidation of the Principate.

The centralization of the new regime, however, did not allow the client‑king the possibility of conducting an independent and vigorous foreign policy. This limitation could partially explain the enormous energy that he poured into grandiose building projects.

The jewels in the crown of Herodian architecture were two new towns. Caesarea, on the coast, adorned with all the public edifices of a Roman city (theater, amphitheater, hippodrome), was to become the major port of the future province and the seat of the procurator. Sebaste, founded near ancient Samaria, was to provide the king with loyal soldiers.

There were also the royal citadels erected throughout the land, often on sites of former Hasmonean structures. The most famous example is Masada. This isolated rock on the edge of the Judean Desert was fortified in the Hasmonean period, and later transformed by Herod into a splendid palace and fort. Another citadel, Herodium, built on a hill in Bethlehem, was intended by Herod to serve as his burial place in imitation of such mausoleums built by Augustus.

Other fortresses overlooked the Judean Desert. Indeed, the route leading up from the valley of Jericho to Jerusalem was of prime strategic importance. Yet strategy was not the sole motivation: in these splendid winter palaces, the king could relax and live as he pleased, far away from the reproving eyes of orthodox subjects in Jerusalem.

Jerusalem, however, was not neglected. Not only did he adorn his capital in Roman style, but with the idea of immortalizing himself while demonstrating his loyalty to Judaism, Herod also rebuilt the Temple in magnificent proportions. Even the sages, who disapproved of his conduct in private and public affairs, could not but express admiration for his splendid Temple, saying that “He who has not seen Herod’s building, has never seen a beautiful building.” 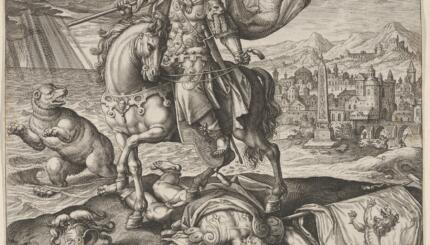